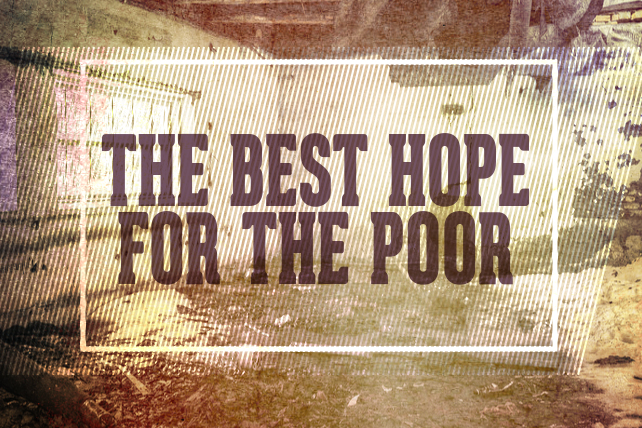 There is so much being said about the poor. We should be involved in this project or that, each one telling me, or at least implying, if I don’t I am uncaring and heartless. So much of it when you read is written as “them” and “us.” History clearly shows that much of it quickly becomes compromised on the gospel, if they ever were clear on the gospel in the first place.

Where is the authority to speak on these issues, and how is it all meant to look on the ground?

Jesus, in whom there are unsearchable riches. Jesus, who now has all authority and power. Jesus, who all creation is for—was poor.

His mum was close to disgrace when pregnant. He was born in a shed and had to make do with cloths instead of proper clothes as a baby. His cradle was an animal feeding trough. Others brought a lamb to sacrifice at their son’s circumcision. At his circumcision, his mum could only afford a pigeon. He was a refugee. He grew up in an area from which nothing good came.

When he became a man, he was homeless, with nowhere to lay his head. He had to rely on charity from others.

He died naked and penniless, and he was buried in a borrowed grave.

When you see people in need, don’t think you understand, but Jesus, Jesus Christ the Son of God, gets them. He was tempted in every way like they are but was without sin.

What does he say about the poor? He preaches the gospel to them. If they believe, he adopts them into his family. He proudly calls them brothers. His Father becomes their Father, they are co-heirs in Christ. He came into this world to raise the poor from their sin to be heirs with God and joint heirs with Jesus. So Jesus is not ashamed to call them brothers—exactly the same as everyone else.

His prophets and apostles were no better off. John the Baptist lived in the back end of nowhere and had little to spend on diet and clothes. Peter and John confessed to having no silver or gold, and Paul knew hunger, thirst and often went without food. Sometimes he knew cold and nakedness. They knew poverty, but they preached Christ crucified and they loved every church that preached him because he was the head and there was hope for everyone from every background. In church, slaves could be spoken to at the same level as masters.

Let’s ignore those who patronize the poor and let’s follow Christ and those sent by him, by pointing the poor to Jesus—let no other issue stand in the way. If they are saved, they are brothers and sisters in Christ, co-heirs in Christ, members of his body the church.

At Pentecost, we see what this looks like. It is worked out not by writers or academics but by every Christian in daily church life. Even if it means selling all you have, no one should feel looked down on as we spend time with each other Sunday by Sunday, serving each other, loving each other and bearing with each other. Listen to Paul speaking of church life: “Here there is no Greek or Jew, circumcised or uncircumcised, barbarian, Scythian, slave or free, but Christ is all, and is in all.” Only Jesus Christ can do this. He has made us all children of God.

So how do we help the poor? Listen only to Jesus. He not only has all authority and power, that means we don’t twist his words. Listen to him, obey him and preach him, and be part of a church where this unity is shown. Serve in his church that reflects him, making every effort to keep the unity of the Spirit.

Pray for churches because that is where the real action is.