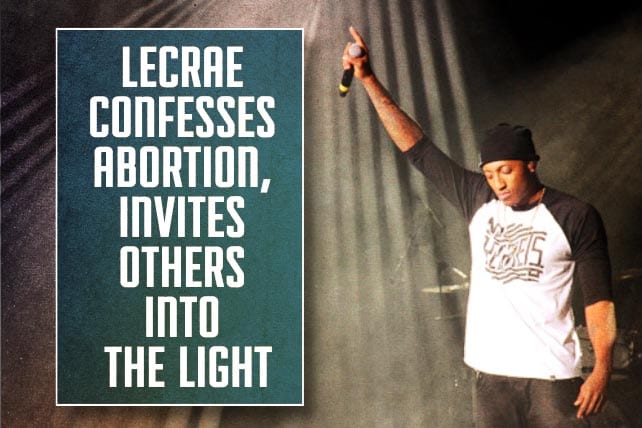 As the 42nd anniversary of Roe v. Wade draws near, we are reminded of how large and formidable the abortion industry has become in the United States. Planned Parenthood survives with a heavy dose of government funding, even as overall abortion numbers are down and seem to indicate the entire industry is diminishing.

The battle between life and choice is being fought one story at a time.

On one side is 25-year-old Emily Letts, who uploaded to YouTube, as a “positive” story, what she claims is her abortion procedure (the actual procedure is shielded from view and the authenticity of Letts’ video remains in question). It became an overnight viral phenomenon, spawning websites dedicated to gathering up more stories from women who seem to harbor no regrets for their choice, with the intent of alleviating the private shame.

On the other side are those who know such deep guilt can only be relieved by the open confession of sin, a story Lecrae Moore lived out firsthand, and a message he’s now willing to share. It was honesty that opened the door of healing for the 35-year-old Grammy Award winning hip-hop artist who has come forward to admit he advocated for the destruction of his own child in 2002.

Lecrae put his story in the public spotlight voluntarily, and in a big way, in the track “Good, Bad, Ugly” from Anomaly (2014), an album which debuted at number one on the Billboard 200 chart. The first verse recounts the true story of his sinful relationship with a past girlfriend:

I remember back in ’02
I was in school and actin’ a fool
My soul got saved, my debt had been paid
But still I kept running off with my crew
Sex on my brain, and death in my veins
I had a main thing, we stayed up ‘til 2 (Smokin!)
Waking and baking we naked, my body was loving it
Soul was hating it,
And time and time after time, our bodies were close
The girl was so fine
We heard a heart beat that wasn’t hers or mine
The miracle of life had started inside
Ignored the warning signs
Suppressed that truth I felt inside
I was just having fun with this, I’m too young for this
I’m thinking me, myself, and I
Should I sacrifice this life to keep my vanity and live nice?
And she loves and trusts me so much that whatever I say, she’d probably oblige
But I was too selfish with my time
Scared my dreams were not gonna survive
So I dropped her off at that clinic
That day a part of us died

The arc of the story lands hard on the last line: “a part of us died.” Lecrae openly takes public responsibility for his sin, and he recently took time in Atlanta to share his story with John Piper and John Ensor, the president of Passion Life Ministries.

“I was a young man trying to figure out what I was going to do with life,” Lecrae said in the roundtable discussion. “I hadn’t finished school. I had met the Lord, but I was still trying to get my footing in terms of walking with Jesus. There was so much that happened. Literally, in the middle of that relationship, I was feeling the conviction. I felt like God was giving me opportunities to escape. We were doing drugs and engaged in sexual activity consistently.”