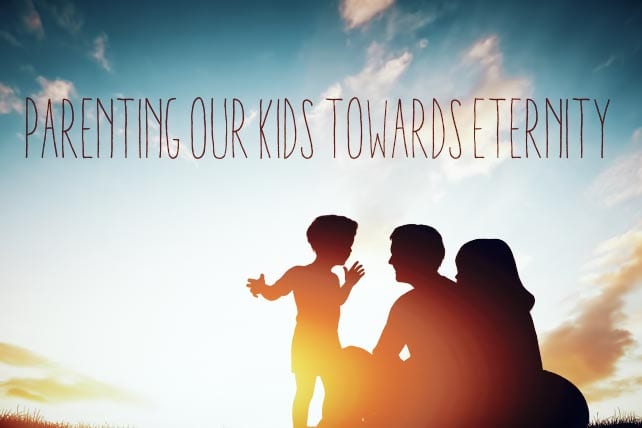 Have you received the annual Christmas letter from The Perfect Family? You know, the one with the kids who captain the lacrosse team, jump horses, make the dean’s list, play violin, serve at the homeless shelter, and learn Greek and Latin, all while mentoring other children? By the time you finish reading the letter and set it down with trembling hands, your Christmas spirit has evaporated. You have a panicky fear that maybe you haven’t provided enough opportunities for your kids.

In moments like this—and in a thousand other moments of parenting panic—it’s good to remind ourselves of where we’re headed and what counts the most:

… straining forward to what lies ahead, I press on toward the goal for the prize of the upward call of God in Christ Jesus. (Philippians 3:13–14)

The goal of Paul’s life—everything he does—is future resurrection in the new creation. This final goal doesn’t render obsolete all his daily activities, such as eating, sleeping, working, evangelizing, talking and traveling. Rather, it orients and aligns them. It gives them a purpose. And it does that for our parenting, too.

We’re called to parent our children toward eternity. This is a major challenge. It turns out to be remarkably difficult to keep our hearts fixed on God’s future new creation rather than attempting to seize that future in our present. Parents attempt to establish heaven on earth in at least two common ways. Some of us expect our children to be heaven for us. Others expect to build heaven for them.

Making Our Kids Our Heaven

I know parents who require perfection from their children. Failure is not an option. Demanding heaven on earth from them, they make it hell instead, squeezing, scolding and cajoling them into the very sense of failure they’re desperate to help them avoid.

Perhaps you don’t fall into that trap in such an extreme way. But isn’t it easy for the successes or failures of our children to assume too great an importance? Hold a penny close enough to your eye and it will obscure an entire building. Hold a child too close and she’ll obscure your view of heaven.

Our goal as parents is to reach the new creation together with our children. We’re to be a pilgrim people, journeying toward future perfection, but never there yet this side of heaven. We’re to say with Paul, “Not that I have already obtained this or am already perfect …” (Philippians 3:12).

When we live as pilgrim parents, we won’t be crushed by our children’s imperfections, or our own. We won’t require perfection because we know we’re all progressing toward perfection. We’ll confess our parenting failures to our children and seek forgiveness from Jesus together with them. We’ll release our children from the impossible burden of being heaven for us. Instead, we’ll invite them into the joy of traveling there with us.

Building Heaven for Our Kids

Even if we don’t make the mistake of expecting too much from our kids, we may well find ourselves expecting too much for them. With all the best of intentions, we may try to give our children heaven now. Several years ago, The Atlantic published an article titled “How to Land Your Kids in Therapy.” The author observed,

The American Dream and the pursuit of happiness have morphed from a quest for general contentment to the idea that you must be happy at all times and in every way.

In other words, we want heaven for our kids. The Atlantic article notes that by giving kids a huge array of choices and protecting them from failure at all costs, their well-meaning parents teach them that they deserve perfection. The problem is that children who don’t persevere through difficulty become young adults who can’t deal with failure. When their parent-built heaven crumbles, the kids land in therapy.

Parent-built heavens can’t compare to the one God is preparing for his people. The bigger and more glorious the future new creation is in the hearts of Christian parents, the less we’ll feel the need to keep our kids from failing at all costs. Instead, we’ll teach them to experience failures as reminders that we haven’t yet arrived at the new creation.

We’ll help our children see their time in this world as preparation for the world to come. We’ll teach them to so treasure the eternal weight of glory that a bad grade, a bad complexion or a bad mistake on the sports field won’t destroy them. We’ll show them that no accomplishment in this life brings perfect and lasting satisfaction, and we’ll help them savor their best experiences as mere foretastes of a much greater future.

When my parents planned a family trip across the United States in my childhood years, we talked about it for two full years in advance. Surely, heaven deserves a lot more family discussion and anticipation than California!

Let’s pray about heaven together as families, stoking our excitement. Let’s sing of heaven (the last verse of many great hymns speak of it). Let’s discuss and savor Bible passages like Isaiah 65–66, Romans 8 and Revelation 21–22. We’re pilgrims, so let’s keep walking toward the Celestial City, bringing our kids along with us.