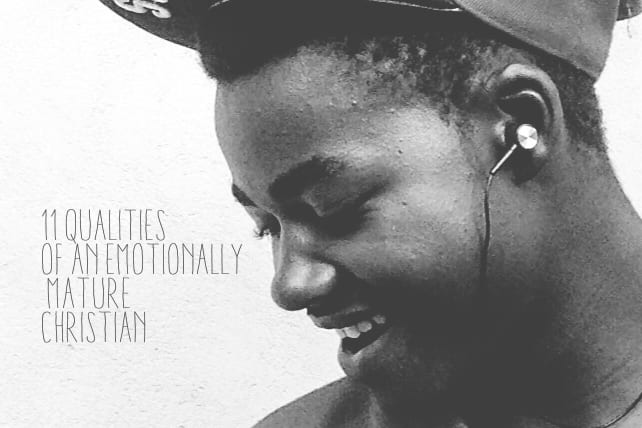 How is it someone can be saved and not look much at all like Jesus?

Controlling and manipulative pastors. Elders who gossip, rant and lose their cool. Christians more materialistic than their non-Christian neighbor. Christ-following people who believe they must fix and change everyone around them. Parents who helicopter over their kids, drawing meaning and identity from them.

I was that Christian.

My spiritual discipline game was tight. I read the Bible and prayed every day. But I was filled with anxiety and fear, my mood often unpredictable.

Several months ago, I discovered something that started me on a journey toward a more healthy, Christ-centered life.

I realized I was emotionally immature.

Even though I knew the Bible well, prayed often and valued Christ-centered community, I was an infant emotionally.

And, as Peter Scazzero writes in his book Emotionally Healthy Spirituality,

“It is impossible to be spiritually mature while remaining emotionally immature.”

Bold statement? Yes. Overkill? Not in my opinion. In recent years, authors like Daniel Goleman and Travis Bradberry have awakened millions to the benefits of emotional maturity, connecting it to everything from healthy relationships to success in the workplace. In fact, Goleman says emotional maturity (or EQ—emotional quotient) is more important than God-given intelligence (IQ), accounting for 90 percent of what moves people up the ladder.

So, what is emotional maturity?

In short, it’s the ability to identify and manage your emotions, as well as the emotions of others.

Emotional maturity seeks to do these things:

• Develop empathy (identifying with and having compassion for others).

• Learn how the past impacts the present.

This, I believe, is a missing component of spiritual formation in the American church. A big one. Fortunately, emotional maturity isn’t fixed. We can grow and become more compassionate, self-controlled spouses, parents and leaders.

I’m still a long way from emotional maturity. But for the first time in my life, I have a picture of what it looks like.

Here are 11 qualities of an emotionally mature Christian.

1. They accept others without trying to fix or change them.

Several months ago, the fam returned from Disney World to a loud sound in the laundry room. Turns out the basement was filled with a foot of water. Thanks life.

We called a plumber who said he charged $75 just to walk in the door. I said no thanks rather jerkishly. And I didn’t feel bad. Then I proceeded to fix the problem myself.

Two days later, after hours of digging, cutting and other plumbing crap (literally), I fixed the problem. The rush I felt afterward was similar to the time I bought my first new car. I sent pics to everyone, letting them know I, Frank Powell, fixed this problem.

Fixing stuff is intoxicating. So is fixing people.

But it’s not healthy.

They understand God doesn’t need divine plumbers. And they don’t want to see their brother’s crack. So they wear their pants at an acceptable height, resolve to leave the fixing to God, and spend more time listening than talking.