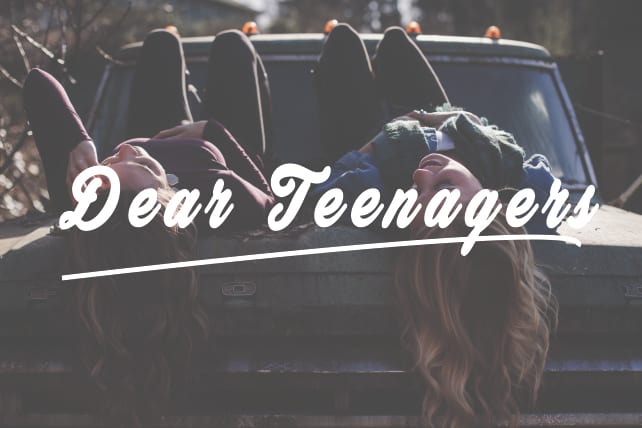 I remember having my heart broken as a teenager. As I drove down the street in my 1966 Ford Fairlane I pushed the pedal down and let my 289 V8 powered car accelerate to an unsafe speed. With tears flowing down my cheeks I wondered down deep in my soul how she would feel if I just jerked the steering wheel into the telephone pole just ahead…and died.

My foot came off of the gas pedal and my tears eventually stopped flowing. My accelerated heartbeat soon came back down to a normal rate of thumping. But it made me realize, even as a teenager, how a painful situation combined with an impulsive action could destroy a young life in an instant.

After 25+ years of working with teenagers I’m convinced that suicidal thoughts among young people are NOT uncommon. The surge of hormones combined with an extreme sense of self-awareness and a thirst for social status/acceptance combine to form a dangerous elixir. Add to this mix the reality of cyber-bullying, sexting and all the dangers of social media and the potential for teen suicide accelerates like a V8 engine.

Last week I wrote a blog called 13 Reasons Why…suicide is the worst option, based on the wildly successful (and extremely controversial) book and Netflix series, Thirteen Reasons Why. It’s all about why a teenager girl committed suicide…13 reasons why. It was the most liked, read and responded to blog I’ve written in awhile so I thought another article on teen suicide would be helpful.

If you’re a teenager struggling with suicidal thoughts, I encourage you to talk to your parent and/or youth leader. Get some help right away. Life is a team sport and you need others to help you navigate through this.

With this as a backdrop here are five dangerous lies that can lead to teen suicide:

1.  “Nobody understands what I’m going through.”

Even if it was true that no human being understands what you’re going through, Jesus does. His ministry began with a 40-day onslaught of temptation from Satan himself in a Judean desert. It continued with him being verbally attacked, bullied and threatened. His ministry culminated with unimaginable torture and a gruesome crucifixion. I think it’s safe to say that nobody who has ever lived had as horrible of a death as Jesus did.

There’s nothing we are going through that he cannot relate to on the deepest level. Quite literally he feels our pain.

As Hebrews 4:15,16 reminds us, “For we do not have a high priest who is unable to empathize with our weaknesses, but we have one who has been tempted in every way, just as we are—yet he did not sin. Let us then approach God’s throne of grace with confidence, so that we may receive mercy and find grace to help us in our time of need.“

Jesus understands what you are going through. He feels your pain and he is shedding tears along with you.

Maybe you feel isolated and alone. Maybe you come from a broken and/or dysfunctional family and it’s easy for you to believe that there is no help to be found.

But you don’t have to be alone. There is human help to be found (churches, youth groups, teachers, coaches, counselors, suicide prevention organizations, etc.) and there is divine help to be found.

Psalm 121 is nicknamed “A Psalm of Ascents.” The Old Testament Jews quoted it as they ascended up the Wadi Qelt on their way to one of the three annual religious festivals in Jerusalem. It reminded them, as they marched up this tiny, dangerous trail, that God was with them. In the midst of wild animals, the threats of robbers and the dangerous cliff right next to this long trail, God was with them.

This Psalm reminded the Israelites to lift their eyes toward Jerusalem. This beautiful city, stationed at the top of a mountain, was where every Jew in the “ascent” was marching toward. This city was where the Ark of the Covenant was kept in the temple. This Ark represented the presence of God himself.

This Psalm is a powerful reminder to all of us that we are not alone…even in the midst of our own personal dark and dangerous wilderness. It reminds us that, as we keep our eyes on heaven, The New Jerusalem, we can know that our great God will protect us from the dangers all around.

“I lift up my eyes to the mountains—where does my help come from? My help comes from the Lord, the Maker of heaven and earth. He will not let your foot slip—he who watches over you will not slumber; indeed, he who watches over Israel will neither slumber nor sleep. The Lord watches over you—the Lord is your shade at your right hand; the sun will not harm you by day, nor the moon by night.The Lord will keep you from all harm—he will watch over your life; the Lord will watch over your coming and going both now and forevermore.” Psalm 121

God can (and wants to) help you.

It may feel like it but it’s not true. The Maker of heaven and earth loves you…and so do more people than you might think. But even if nobody else truly did, God does.

In Romans 5:8 the Apostle Paul wrote these powerful words, “But God demonstrates his love for us in this: While we were still sinners, Christ died for us.”

God loved us so much that he crushed his one and only Son to be in a relationship with us. And he did it without asking us to clean up our act first. He gave us his best (his own Son) when we were at our worst.

That’s how much you are loved!

No you are not. You were created in the image of God himself. You can say these words along with King David in Psalm 139:13,14, “For you created my inmost being; you knit me together in my mother’s womb. I praise you because I am fearfully and wonderfully made; your works are wonderful, I know that full well.”

God made you. He handcrafted you in your mother’s womb. It may not feel like it right now, but you are a customized creation of God and you have immense value.

Someone once said, “The value of something is determined by the price someone is willing to pay for it.” Jesus was willing to shed his own blood so that he could redeem you. You and I were sold as captives to sin but Jesus purchased us out of this slavery with the blood he shed on the cross for our sins. God redeemed us from slavery and adopted us into his family (Galatians 4:4-7).

You are of immense value to God and he has a very specific purpose for you to accomplish on earth. Don’t cut short your life because of a suicide lie. Discover that purpose and walk in it.

Perhaps you’ve done something that you never think God can forgive you for. Or maybe something’s been done to you and, although you are a victim of someone else’s sin, you feel full of shame. Regardless of the situation there is hope in Jesus!

Colossians 2:13,14 tells us, “When you were dead in your sins and in the uncircumcision of your flesh, God made you alive with Christ. He forgave us all our sins, having canceled the charge of our legal indebtedness, which stood against us and condemned us; he has taken it away, nailing it to the cross.”

All your sins and all my sins are nailed to the cross of Christ. When we simply put our trust in him we are forgiven, once and for all, for every sin we ever committed and ever will commit.

Colossians 2:15 puts an exclamation point on this passage, “And having disarmed the powers and authorities, he made a public spectacle of them, triumphing over them by the cross.”

Satan has been disarmed and now he has been shamed by the cross. His power has been broken and your victory has been secured through Christ.

So stop buying the lies and choose to believe the truth of the Gospel of Jesus!

If this is good news to you then join us on September 23 for Dare 2 Share Live. We are praying and pushing to rally, inspire and train 50,000 teenagers in 50+ cities across the nation to share the good news with both strangers and friends. It’s time to get this message of hope out to everyone. Join us!