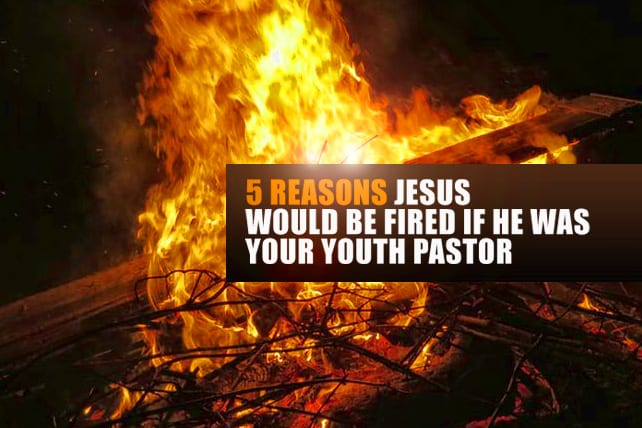 In the crazy “what if” world of impossible scenarios, I am convinced that Jesus would be fired within his first few months of becoming a youth leader at the typical church. Here are five reasons why.

1. Jesus would be fired because He would shrink the group before he grew it.

In the Gospels, Jesus scared away the loud crowds and nestled into the committed core on several occasions. What makes us think he would do anything differently in a modern youth group context as a youth leader?

His large and thriving “youth group” shrunk to next to nothing after his hard-to-understand lesson on communion in John 6:66, “From this time, many of his disciples turned back and no longer followed him.”

In Luke 14:25-27, Jesus implemented his crowd-shrinking strategy in a much more direct way, “Large crowds were traveling with Jesus, and turning to them he said: ‘If anyone comes to me and does not hate father and mother, wife and children, brothers and sisters—yes, even their own life—such a person cannot be my disciple. And whoever does not carry their cross and follow me cannot be my disciple.”

Calling for such radical commitment would cause pastors’ kids to complain to their parents. Not to mention how Jesus’ thought-provoking teaching style (that often created more questions than answers) would cause parents and pastors alike to cringe. Their red faces would soon turn into a pink slip.

2. Jesus would be fired because He would do most of his youth ministry outside the four walls of the youth room.

How much time do we see Jesus ministering in the temple or synagogues (the equivalent of a church building in the Jewish context)? He was there some, but more often than not, his pulpit could be found by a fig tree, on a pathway, in a field, on a mountain, or in a boat. He used nature as sermon illustrations and “that just happened” incidents as his teaching curriculum.

Jesus was his own mobile app. He applied truth on the go to the lives of his mostly teenaged disciples in real life situations, and it would get him fired really quickly from most churches.

3. Jesus would be fired because He would bring the “un” ones (dirty, flirty and rejected) into his inner circle.

“A man with leprosy came to him and begged him on his knees, ‘If you are willing, you can make me clean.’ Jesus was indignant. He reached out his hand and touched the man.” Mark 1:40-41

“When one of the Pharisees invited Jesus to have dinner with him, he went to the Pharisee’s house and reclined at the table. A woman in that town who lived a sinful life learned that Jesus was eating at the Pharisee’s house, so she came there with an alabaster jar of perfume. As she stood behind him at his feet weeping, she began to wet his feet with her tears. Then she wiped them with her hair, kissed them and poured perfume on them. When the Pharisee who had invited him saw this, he said to himself, ‘If this man were a prophet, he would know who is touching him and what kind of woman she is—that she is a sinner.’” Luke 7:36-39