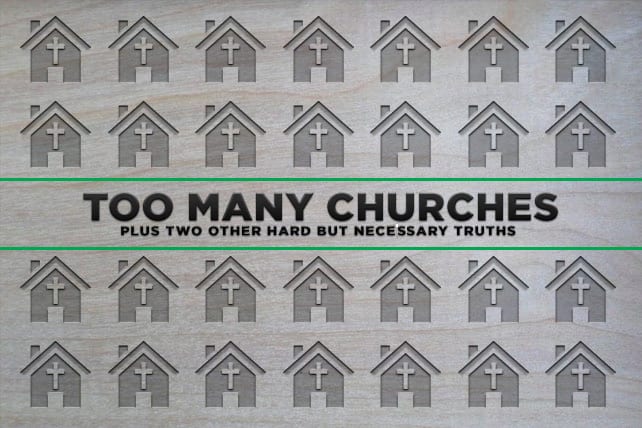 In the middle of an economic recovery, hundreds of shops and malls are shuttering their doors. There have already been as many retail bankruptcies in 2017 as in all of 2016. J.C. Penney, RadioShack, Macy’s and Sears have each announced more than 100 store closures. Just a few weeks ago, women’s apparel chain Bebe said it would close all of its remaining 170 shops and only sell online.

So what’s going on?

There may be more of a direct parallel than you think. First, here are the three realities causing the retail slide:

1. People are buying more online than they used to.

OK, no surprise here. Amazon is killing retail. Amazon’s sales in North America quintupled from $16 billion to $80 billion. As an Atlantic Monthly article noted, “Sears’ revenue last year was about $22 billion, so you could say Amazon has grown by three Sears in six years.”

2. There are way too many malls.

Right now, there are about 1,200 malls. In a decade, you can expect that to drop to around 900. No, that’s not the death of malls, but it’s not exactly much of a “life.” The reason is that we are “over-stored” (too many stores). When you have store after store catering to the same kind of customer, there is little chance for all of them to prosper.

3. Americans are shifting their spending from materialism to meals out with friends.

This may be the biggest trend of all—or, at least, the most significant. Travel is booming. Hotel occupancy is way, way up. Last year U.S. airlines set a record with 8.23 million passengers. The rise of restaurants is even more telling. Since 2005, sales at “food services and drinking places” have grown twice as fast as all other retail. In 2016, for the first time ever, Americans spent more money in restaurants and bars than at grocery stores.

Some speculate that many young people are driven by the experiences that will make the best social media content. Laugh if you want, but “what experience will reliably deliver the most popular Instagram post” is not insignificant to many people.

What does this have to do with churches?

Let’s restate the three reasons for the retail slide in terms of how it parallels what the church is facing:

1. People are exploring churches online more than they used to.

People are not just buying online, they are exploring all future actions online. That means that your website is the portal, the first step that people take in regard to whether to attend. At Meck, we’ve now found that the most common first step before attending is visiting our website. The second step is watching a service online. Then, and only then, might they attend. When people at Meck invite their friends, they often intuitively begin by saying, “Check it out on the web.”

For this reason, our printed invite cards that we provide, and that many Meckers carry to give to friends and people they might meet, contain only our church name and website.

That’s the first step they are going to take anyway.

Yet just as retail stores failed to see the importance and power of online shopping, too many churches develop their website primarily for those who are already attending. Instead of realizing that’s where many people will “shop” for a church, they treat it as a destination for those who are already part of their community. To switch metaphors, instead of treating it like the front door or foyer into the home that it is, they develop it as if it’s the kitchen or living room for the family to hang out in.

2. There are way too many churches.

It would be glib to say that with “way too many malls” there are also way too many churches.

But let me define “too many.”

I strongly believe in church planting as well as the more recent multi-site strategy that many churches are pursuing.

But let’s be candid. I can count on one hand the number of churches I am familiar with that are truly oriented almost exclusively to the unchurched in terms of their outreach. Their rhetoric may say otherwise, but their actual outreach strategy, their marketing, the way they interact with other churches, reveals the truth.

And church planting isn’t helping. There is too much indiscriminate, “don’t bother me with the facts about the area’s need” church starts that are designed/equipped to do little to penetrate the unchurched world.

A church planter will come into an area, find several large, established churches representing a wide array of denominations and styles. These churches are growing, effective, established. On top of this, they will find almost every school and every movie theater housing a new church start. So if there is a need for new churches, there is an ample crop being planted.

So what does that church planter do?

Come and plant there anyway, becoming the 15th McDonald’s in a row of 14. Why? On paper, the area is a hot demographic. Their rhetoric? The vast numbers of unchurched. Reality? They are not designed to reach the unchurched, and often not even desiring to be.

So let me touch the third rail and say what few will dare: Just as retail is over-stored, we are often over-churched. At least, in terms of the kind of church that we already have ample numbers of in existence. This is why so many church plants and smaller churches are closing their doors or failing to reach critical mass.

We must either plant where there is truly a need, or plant a church that is truly for the unchurched. Apart from this, we will continue to see failure. Yes, the church is a supernatural entity that the Holy Spirit can do with as He wishes, but we are also called to another Holy Spirit-blessed endeavor: to think and be strategic.

3. Americans are shifting their “spending” from spiritual truth to spiritual experience.

Though the aforementioned online buying is cutting deeply into traditional retail, it’s not cutting into retail just because it’s retail. People still crave experience. Malls are dying because we’re over-stored and we’re receiving too little experience when we go. In short, malls used to be entertainment destinations; now, as one Tampa, Florida, resident put it: “I don’t like going to malls anymore. They’re energy suckers.”

But if experience can be re-melded to retail, then it becomes instantly attractive. Even more attractive than the convenience online shopping provides.

This is particularly true for Generation Z. “These connected souls value the experience of being connected… And when they shop, they are looking for an experience in-store that is like, or connected outright, to the world they know online.” In fact, 98 percent of Generation Z shop in physical stores searching “beyond the ‘buy button'” for an experience that takes places in three dimensions.

Which is why the latest entry into brick and mortar retail is, ironically, such companies as Amazon and Google. And Apple is hard at work with a new set of retail stores that are designed almost entirely for experience. Their goal? Instead of “Meet me at Starbucks,” to somehow make it “Meet me at Apple.”

So what experience are you offering as a church?

If people want to experience something before embracing it, belong before they believe, try out before they click “buy,” then how is your front-door, weekend service (which is still the front-door, after the website) doing at offering that experience?

It’s an important question to wrestle with. Because today, it’s not a seeker-service they need,

An experience that will be so winsome and compelling that they will not only want to come back,

…but explore a Person they can come to.