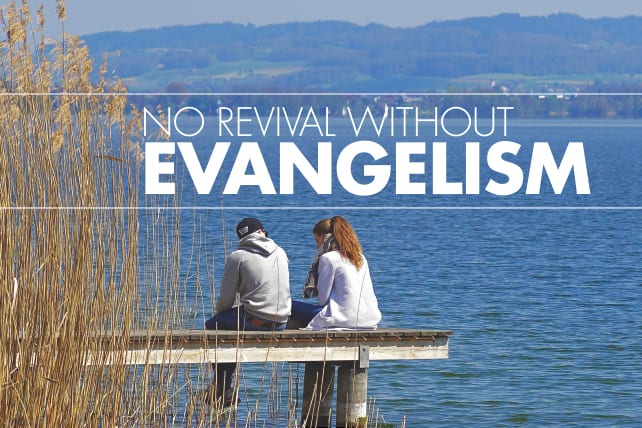 The preaching of the gospel was at the heart of the Great Awakenings. There can be evangelism without revival, but there is no true revival that does not result in evangelism. The reason for this is that revival results in both the reawakening of Christians who have grown cold and the awakening of dead souls (evangelism).

The Second Great Awakening in the United States is a prime example of how evangelism and revival happen simultaneously. It began among the Presbyterians in the eastern states, in the late 1700s and early 1800s. The traditions of the time included making a big deal about the taking of communion, which was typically celebrated once a year. But their special communion gatherings lasted three to five days!

Multiple churches would come together on a Friday to hear preparatory sermons that would last all day. Then on Saturday, there would be an examination of each congregant by the pastors. Every person would be asked, “What is your relationship with God like? Where are you going in your relationship with God? Tell me about the spiritual disciplines in your home. What Scriptures are you reading?” There would also be retesting of their knowledge of the catechism. Then, in the evening, there would be more preaching of the gospel, and strong appeals for people to be reconciled to God.

Hundreds, sometimes thousands, would participate in these sacrament occasions. And this model became the ignition point of the Second Great Awakening, because it was here that the first revival fires broke out. The power of these revivals further encouraged the pattern of prolonged gathering for prayer, examining the soul, preaching the gospel, taking communion, great celebrations of grace, and seeking after God for a greater work of His Spirit.

During this period, another phenomenon was happening in America. People were leaving the East Coast in a great southern and westward expansion. For example, in the 10 years between 1790 and 1800, the state of Kentucky grew from 70,000 people to 220,000. But there were no churches or organized religion, and a state of chaos and lawlessness characterized the region.

But a minister named David Caldwell, a protégé of Jonathan Edwards and one who had been part of the Presbyterian sacraments in the east during the great moves of the Spirit there, set up a training center for preachers in the Carolinas called the Log College. He began mentoring 50 or 60 men a year, and he taught them about the outpourings of God’s Spirit.

These “Log College men” placed a great emphasis on the enthusiastic preaching of the gospel, and as they spread out to preach and plant churches, pockets of revival began breaking out throughout the greater Greensboro area. And then five men trained by David Caldwell, called the “Five Wild Men of the Cumberland,” began to exercise a powerful ministry in Tennessee, Kentucky and out on the western frontier. They planted churches and focused on evangelizing these areas.

The leader of the Wild Men of the Cumberland was a man by the name of James McGready. Together, these five associates focused on organizing covenants of prayer among the people—praying weekly for the salvation of souls and the enlivening of the Word of God in their churches and throughout the world. Once a month they would have an all-day fast day within their local church, and on a quarterly basis they gathered regionally to pray and fast.

In 1797, these prayers had a remarkable effect. As the gospel was preached, the people began to melt under the Word of God and cry out about their need to be changed. One of the high points of this period of awakening came at a camp meeting in a remote place called Cane Ridge in Kentucky. In August of 1801, 30,000 people gathered there. This was ten percent of the entire population of the state of Kentucky! For five days, the gospel was preached continually from morning until night. Thousands of people became Christians.

This model of camp meetings, where people would travel to spend days away under intense preaching and examination of the soul, spread everywhere. As this happened, pockets of revival began to spring up throughout America.

The Methodists in particular set up camp meetings everywhere throughout the lawless western territories. These meetings were almost like a carnival, because many of these people lived out in rural places where there was no fellowship all year long. When they would come to these large gatherings, the energy was so high and the preaching of the gospel was so clear—all day and into the night—that thousands of people would come to Christ!

Within 10 years of the Cane Ridge revival and all that followed, literally hundreds of locations around the United States were experiencing revival. Revivals were reported on the campuses of America, including Yale, Williams College and Princeton, among many others.

The Haystack Revival at Williams College in 1806 occurred. Several students taking shelter near a haystack during a thunderstorm began to pray for world evangelization. As they prayed, they were overcome with a powerful outpouring of the Holy Spirit. These students, including Samuel Mills, ended up being responsible for the birth of the Student Volunteer Movement. This movement lasted for a hundred years and resulted in thousands of missionaries taking the gospel to the ends of the earth out of American universities.

Simultaneously, the Second Great Awakening fueled the birth of the modern missionary movement, an explosion of missionary activity and vision to see the earth “filled with the knowledge of the glory of the Lord, as the waters cover the sea” (Hab. 2:14). This passionate drive for global evangelism is inextricably linked to this revival.

The Second Great Awakening, then, is a model of what happens in every true outpouring of God’s Spirit: Evangelism is at the heart of what God does in revival. You can’t extract evangelism from revival, because it’s when God animates the good news of Jesus and convicts hearts of their need for Him that the Holy Spirit can pour Himself out on vast numbers in revival and spiritual awakening.

In World War I, airplanes were new and glamorous. Squadrons of planes would take off together and fly in formation, until they encountered enemy planes. Then pilots would dissipate in every direction to engage in aerial “dogfights.” These sky duals became legendary, covered by newspapers and garnering fame for the most skilled pilots, with a scorecard of “kills” to their record.

But ironically, after World War I, the United States military almost concluded that the air force as a strategy for war was ineffective. Careful analysis revealed that while individual dogfighting was great for producing heroes and headlines, in terms of actually advancing the cause on the battlefield, it simply didn’t work.

The problem was only remedied when a decision was made to bring the air corps under military discipline that said, “We’re going to fly in formation, and we’re going to predetermine one target to hit, and we’re not going to divide up or turn back until that mission has been accomplished.” This simple shift in strategy turned air power into a deadly force. While no longer nearly as sensational, trading individual accolades for concerted action was well worth the gains on the field.

This same shift is desperately needed in Christian ministry today. Despite repeated pledges to work together as the body of Christ, ministry leaders scatter in hundreds of directions to do thousands of different things. Of course, many make headlines, millions of dollars are raised, great edifices and organizations are built, and a select group of heroes emerge. But on a strategic macro level, the kingdom of Christ is losing rather than taking ground in our culture.

This is where we can learn a great deal from the Second Great Awakening. Many of us know of the dramatic advances of the gospel during this great season of wide-scale revival that swept entire regions for more than 30 years, but few know the story of the key friendships and core commitments that made these awakenings possible.

First, there was a group of ministers who shared friendship around a common cause. Because they were friends, they could call each other to great purposes, and strive together in a similar direction. Their fellowship fueled their shared passion and became a platform for concerted action. In fact, the men most responsible for sparking the awakening came out of the same school—the Log College started by David Caldwell.

Second, the men used to spark the Second Great Awakening were united in a common understanding of how to pursue revival. In other words, they were trained in a model of how to seek a great work of the Spirit of God that included three main elements:

They entered into covenants of prayer, leading their churches to set aside specific days of prayer and specific times to pray. In particular, they asked believers to pray at sundown on Saturday evenings and at sunrise Sunday mornings for the outpouring of God’s Spirit on the preaching of His Word at Sunday services, and for the salvation of the lost. They also set aside days to fast once a month, to unite as believers in a town or area for corporate prayer for an extraordinary work of the Spirit. In addition, large regional “camp meetings” for three to four days were scheduled, at first revolving around the taking of communion, for preaching, examination, prayer and celebration. These prayer covenants made it possible for large numbers of people to join together in agreement on specific days and for specific hours to ask God to pour out His grace.

The annual or semi-annual camp meetings or sacrament services encouraged thousands of believers in a region to gather for days of focused fellowship, preaching and prayer. Day after day, they were under the preaching of the Word, and these events cultivated holy expectation. There was a sense of excitement about being together with other believers and hearing Scripture throughout the gathering. This pattern of annually setting aside long periods of being under the examination of the Scriptures and focused prayer proved to be a lightning rod for revival and the outpourings of the Spirit that came.

The men who were at the heart of these revivals were eager to preach the gospel everywhere there was need. They were consumed with reaching the lost in their cities and regions. And they mobilized their congregations to pray earnestly for the salvation of their countrymen. They were on a passionate mission to spread the gospel, and this passion organized their lives, their efforts and their prayers.

As these groups of friends went out to plant churches and pastor their congregations, they all did these same things in their churches. And as they persevered in them, flying together in formation with a common target and mission, the Holy Spirit began this great revival.