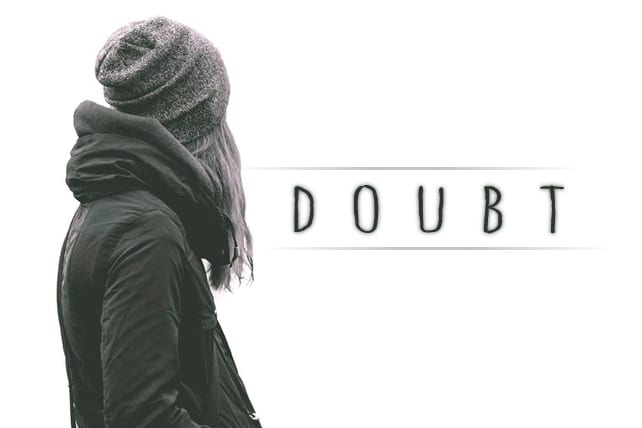 I’m always looking for the easy way out. I’m inherently lazy, short-sighted, impatient, passive or fill in the blank with some other vice. I do not like walking in the tension of anything and if there is a more comfortable option, I will take it with a cherry on top, thank you very much. I fear the unknown—especially when the unknown exists within me, not just around me.

I was created from dust and bone fragments, so I don’t know why I would believe perfection is possible before the return of Christ. I seek it though, friends. I seek it.

One of my favorite passages of Scripture, one I return to again and again and again, is from Mark chapter 9. Jesus had just undergone the transfiguration and had come back down the mountain, running into the father of a demon possessed boy. The father cries to Jesus, “If you can do anything, have compassion and help us!” Sweet Jesus responds with incredulity: “If? If I can heal him? All things are possible to him who believes.” And this, my favorite line in all of scripture, is the father’s response: “I believe. Help my unbelief.”

I come from a charismatic background, not name it and claim it, health, wealth and prosperity, but certainly a side that believes words have life or death in them. That if we speak death, we run the risk of experiencing it, and if we speak life, then the odds are higher we’ll experience it. I look back now and see the ways I misunderstood and ingested theology without parsing it for myself, eating the words given me instead of the Scripture informing them. But what resulted for me is that I became a bundle of fear, afraid to ever speak what was actually true about myself, my sin, my fears, my anxieties, and only willing to speak what was not true, that I had assurance, joy, peace, faith. I didn’t know how to walk in the tension of speaking what was not fully true but which I wanted to be true and speaking what was true but I wanted to be untrue. I could not have said, “Help my unbelief,” because to confess unbelief seemed like the pathway to destruction, but I felt like a liar every time I said, “I believe.”

All that changed in early 2010, when I could not live the lie of belief anymore. I pounded my fists into the tan carpet of my rental house and cried harder than ever before and said to God, for the first time ever, “I do not believe in you!” I have never heard the audible voice of God, but I will never forget the strong impression of the Father picking up his robes and running toward me saying, “Finally. We can begin with this.”

I think there are two temptations for the Christian who doubts. The first is to only say what is yet untrue (I believe) and the second is to only say what is true (I have unbelief). If you come from a background, like mine, where to utter words of unbelief means you are silenced by well-meaning friends who say you’re just going through a hard time and it will wear off, you probably will be bound up in living the lie of belief, and, as Jeremiah 17 says, “You will not see good when it comes.” If you come from a background where it’s OK to have struggles and wrestle with truth and faith, you might be afraid to say the words, “I believe,” because you don’t want to lie about having something you don’t fully have.

What is the doubting Christian to do?

This is why this passage from Mark 9 is so helpful for me. This father shows it is possible to say two conflicting things, neither of which are fully true and both of which are absolutely true at the same time. I believe. Help my unbelief. Both true. Both not all the way true. Both seeming to be in conflict with one another.

I have met a few Christians who have simple faith. They believe the Bible is true, absolutely. They believe Jesus rose from the grave. They believe they are saved. They never wrestle with Scripture in a way that leads to confusion or tension or questions. They simply believe. I know very few of these. The great majority of Christians I know have complicated faiths. They all have a different history behind them that informs their reading and study of Scripture. They all have varying levels of schooling. They have different personalities, different propensities, different desires. And all of these things are informing their belief in some way—and their unbelief in some ways.

The Christian who can say, “I believe. Help my unbelief,” is the Christian who knows with absolute certainty that full, unfaltering faith is possible, and also that they do not have it, not fully. They know they are in progress, going, as Paul said, “from one degree of glory to another” and “the righteousness of God is being revealed faith to faith.” We’re not there yet, is what Paul was saying, farther up, further in, more to go until we arrive on eternity’s shores.

If you’re someone who struggles to believe all the way through all the things you think Christians believe all the way through, I just wanted to say, hey, I’m with you. I struggle with that. My struggles with faith didn’t cease the moment the gospel was unveiled to me. The difference was a difference by degrees: I saw more dimly before, and now less dimly, and will see even less dimly tomorrow. There are so many things about faith and the Bible that seem confusing to me, sometimes even more the more I study and read. I see what seem to be inconsistencies in Scripture, in other Christians, in the world in which we live. I don’t understand fully how justification or sanctification or mortification or vivification work. I don’t always know what I’m supposed to do and what only God can do. Here’s what I know how to do:

I know how to pray, “Lord, I believe. Help my unbelief.”

I’m praying for you today, that you can pray that prayer, believing he hears and heals and finishes what you cannot with mere words and weak faith.

There is no magic bullet for your faith to be bolstered. I’ll share a few things that have grown and strengthened mine, but it might be something entirely different for you and that’s OK. This photo is of the books on our shelves that have helped me realize I am not alone in this wrestle. I’ll also link to a few below.

Help My Unbelief from Barnabas Piper

This sermon from Matt Chandler from before he was my pastor (I listened to it sixteen times in the spring of 2010).