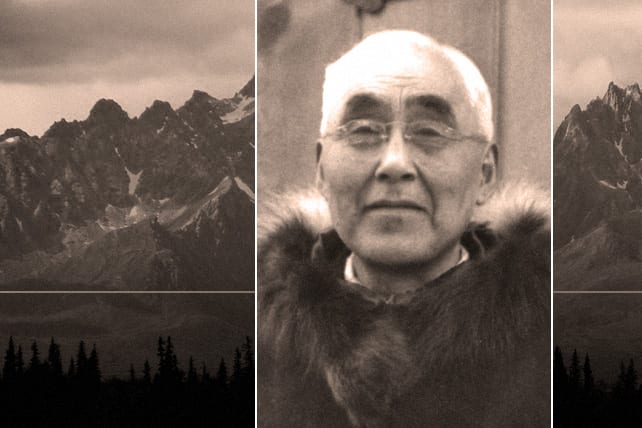 Paul Patkotak (1891-1980) was born during a harsh winter on the North Slope of Alaska. His Eskimo parents left him on the tundra to die rather than face almost certain death from starvation due to lack of food. Paul survived, however, and later became one of the earliest Eskimos to identify with the Pentecostal movement.

Paul’s parents were traditional Eskimos and lived near Wainwright, a village on the Arctic Ocean. He was born in the family’s snow house. At the time, his parents and their five other children were on the verge of starvation. Other families also faced the agonizing choice of whether to allow their children to die from exposure or starvation. Paul’s father insisted that the newborn must be placed in the snowbank, but his mother initially resisted. After several days, though, it seemed obvious that she was postponing the inevitable. They bundled up little Paul, placed him on the cold tundra, and left to go hunting for food.

Shortly after Paul’s parents left, his grandmother ventured outside and rescued the hapless newborn. She tucked her bundled grandson into her own clothing, but she fell in the snow and was unable to get up and return to the house. It seemed that both would die from exposure. However, a hunter discovered their plight and brought them to his hunting camp. That night little Paul had nothing to eat, but he survived in his grandmother’s care.

The following morning, a caribou herd wandered into the camp. The hunters killed enough animals to provide food for the winter months. Paul’s grandmother fed Paul with milk from one of the caribou cows, which she had managed to milk. Later that day, Paul was reunited with his mother, who had never expected to see him again.

Paul was reared according to traditional Eskimo customs, learning to fish, trap and hunt. He had contact with government workers and missionaries, who gave him a rudimentary education based on Bible stories. Although he did not become a Christian until years later, the stories of Jesus intrigued Paul.

Unlike many of his Eskimo friends, Paul wanted to further his education. He worked hard, trapping and pelting countless white foxes, which he planned to sell to make his dream possible. In 1911, he boarded a steam freighter with his pelts and headed for Seattle.

Paul arrived in Seattle and felt overwhelmed by the large city. He discovered a Free Methodist school called Seattle Seminary (now Seattle Pacific University), which he wanted to attend. He was not qualified to enroll, but professors allowed him to sit at the back of the classroom and audit classes.

Paul’s limited reading skills hampered his ability to understand, and other students severely ridiculed him. He grew desperate. He wanted to learn, but education seemed out of reach.

One day in 1913, while Paul was wandering down a street in Seattle, a man asked him, “Are you hungry for the Lord?” He responded affirmatively, and the man led Paul to a small Pentecostal congregation affiliated with the Apostolic Faith Mission (Portland, Oregon), which had roots in the Azusa Street Revival (1906-1909).

The young Eskimo sensed the power of the Holy Spirit in the Pentecostal meetings. An African-American woman caught his attention when she testified that God looks at a person’s heart, not at the color of their skin. He realized that he had built up hatred toward white students at the seminary who mocked him. He also realized that he needed to abandon his belief in the power of traditional Eskimo shamans. Paul responded to the altar call, repented of his sins, and peace and joy flooded his heart.

Paul spent the next two years at a government boarding school for Native Americans, where he improved his reading skills. He also remained active in the Apostolic Faith Mission.

Paul sensed a burden for the Eskimo people. In 1913, in a letter published in The Apostolic Faith newspaper, Paul testified of his newfound faith in Christ and stated that he felt called to bring the gospel to his people. He began praying for a mighty revival to come to the Eskimos.

In 1919, Paul, his wife and children moved to Alaska. They adopted the nomadic lifestyle of a hunter and trapper. This lifestyle made it somewhat difficult to effectively witness to other Eskimos, as they often lived in isolation. Paul was a faithful Christian and shared the gospel when he was able to do so. He was not a credentialed minister, but he went on several extended evangelistic tours across Alaska. The family later moved to Wainwright, so that their children could receive an education.

In the 1950s, the development of the oil industry brought significant changes to the North Slope of Alaska. Outsiders brought money and new opportunities for sin, disrupting traditional society.

In 1954, Paul joined forces with Sherman Duncklee, an Assemblies of God evangelist who was planting a church in nearby Barrow. A significant revival swept Barrow, and then Wainwright. Assemblies of God churches were formed in these towns, and the revival spilled over into the Presbyterian church and divisions between the churches came down. Paul’s son, Steven, was among the hundreds of converts in the revival. Another convert, Ned Nusunginya, would become the first Eskimo to be ordained by the Assemblies of God.

Paul had prayed since 1913 for revival among the Eskimo people. After 40 years of prayer, a spiritual awakening had finally come to the Eskimos!

The story of Paul Patkotak illustrates several themes in Pentecostal history. The interracial nature of the Azusa Street Revival reverberated through early Pentecostalism, and people from varied ethnic and cultural backgrounds found new life in Christ through Pentecostal churches. Significantly, much of the ministry among early Pentecostals was performed by lay persons, such as Paul. The testimonies of these early converts helped bridge cultural divides and laid the groundwork for the development of revivals and churches.

The July 21, 1963, issue of the Pentecostal Evangel included an account of Paul Patkotak and the Wainwright revival. Read the article, “Arctic Village Turns to God,” by Ida Cecelia Piper, published on pages 24 and 25.

This story originally appeared on AG News as part of the “This Week in AG History” series. Photo courtesy of The Apostolic Faith Church (Portland, OR).