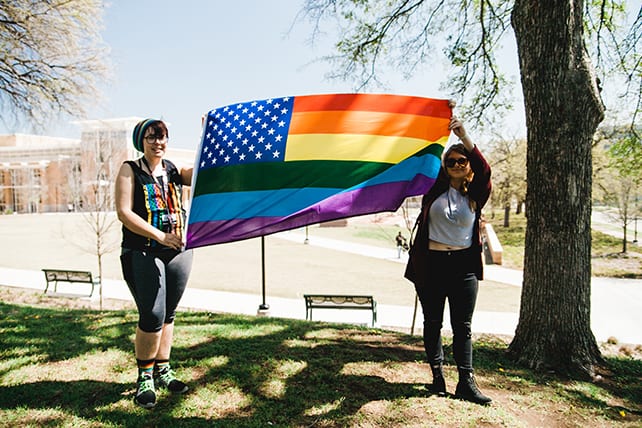 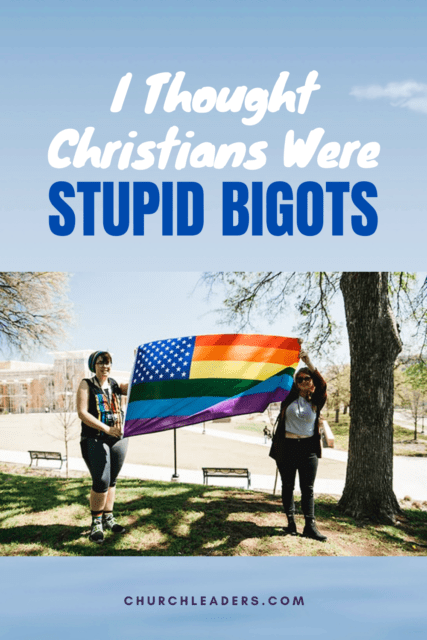 Rachel asks to meet in a fried chicken restaurant. “It’s basically my favorite food ever.” She has long brown hair, thick glasses, and a slightly offbeat sense of humor that makes her fun to be around; as she looks at the menu she makes a joke about ordering chicken breasts, which she later decides is too trashy to include in this write-up.

The joke works, it turns out, because it was Rachel’s sexuality that was one of the reasons she became totally opposed to Christianity as a teenager. “I didn’t grow up in a Christian home at all,” she explains. “So I guess I started life neutral toward Christianity, and then, as I moved into my high school years, I became more opposed to it. The main reason was that I saw it as being for stupid people. Then, as I was about 16, I started to understand my sexuality more. I’d already had some sexual relationships with men—well, high-school boys, really. But as I started to be attracted to women and then act on those attractions, I was like, ‘Oh, this is where my heart is. The reason stuff with boys felt out of place was because it’s not my place.’ I gradually started to own that identity more and more. I knew from the culture that Christianity was against homosexuality. So by the time I was 18, I had concluded that Christians were both stupid and bigots.”

Rachel continues, “At college I became curious about the existence of God…but at the same time I was ashamed about that curiosity. So I would secretly look up things about faith and Christianity on my computer. What I read about Jesus online was much more compelling than what I’d expected. So I was drawn in by this different Jesus—but at the same time, my sexuality was a big barrier. I knew that I wanted to marry a woman someday, and I knew that Christianity wasn’t OK with that.”

But somehow, Rachel couldn’t shake off her interest in Jesus. One day, she was in the room of a college friend and noticed a book on her shelf with an intriguing title: Mere Christianity by C.S. Lewis, the university-professor-cum-children’s-author who wrote the Chronicles of Narnia stories. “The title grabbed me, but there was no way I was going to admit that I was interested in Christianity by asking to borrow it. So I stole it.” As she read it, she had a dawning realization which she describes as: “Oh my goodness—God is real, and I am in a lot of trouble. Because not only is he real; he is perfect, and I am incredibly imperfect.” But there was an element of hope there too, she says: “I understood for the first time that Jesus had come to place himself as a kind of wall between God’s wrath—his right and fair anger at my sin—and me. I knew that if I trusted in Jesus, I was going to be saved. Now, did I understand the full implications of that? Certainly not. But I knew that I could be somehow be connected to Jesus and saved from God’s anger.

“I remember thinking, ‘Well, I like to drink a lot, I like the excessive parts of my lifestyle, I like to sleep with women—and all those things will have to go out the window. But it is stupid to pretend like what the Bible is saying isn’t true just because it’s inconvenient. I need to take this deal because I’m never going to get a deal like this again.’ I had a sense that I needed to pray, and so I just talked to God right then.”

A couple of days later, Rachel ran into the Christian student group on campus. “I had a ton of questions, obviously. I didn’t know anything! They were very good in giving me a Bible, showing me how to pray, taking me to church. The female friends who drew around me became very close to me, helping me fight through the sexual temptation and sexual failure that came. It became pretty clear to me after a little while that my attractions toward women hadn’t just gone when I became a Christian. Those first few years were littered with bad decisions. I was committed to Christ, but then I would choose a sexual relationship and get stuck in these cycles… But my friends would lovingly keep calling me back to what I believed in.”

As I sit eating fried chicken, listening to her story, I’m left with a question: How could you just give up such an important part of your identity, something that had been so fundamental to your sense of self for so long? “Well,” Rachel says slowly, “it would definitely be tragic to give up something that valuable for something that is less valuable. And it would also be tragic to pretend like this real part of my life, my sexuality, is less than it is. But Jesus is more precious than even that very deep part of me, because of his great love. And…” she pauses for a moment with a smile, “that sounds really weird if you’re not a Christian, right? But the Bible talks about a Christian’s relationship with Christ being something we should be able to die for because it’s so precious. And celibacy and singleness are not death,” she says frankly. “Not having sex or not experiencing a romantic relationship is a severe thing, but I’d be willing to give up even more than that. In fact, giving up things is a very normal part of the Christian life. There are lots of people who give up sex, who give up their bodies, who give up their money. And you don’t really do it out of obligation—you do it out of love. You’re captured by Christ’s love, and it drives you to do things that you never thought possible before, because Jesus gives you this sense of security and purpose and an ultimate destination.”

Read more of Rachel’s story in Finding More: Real Life Stories Worth Telling. The book is available to buy here.