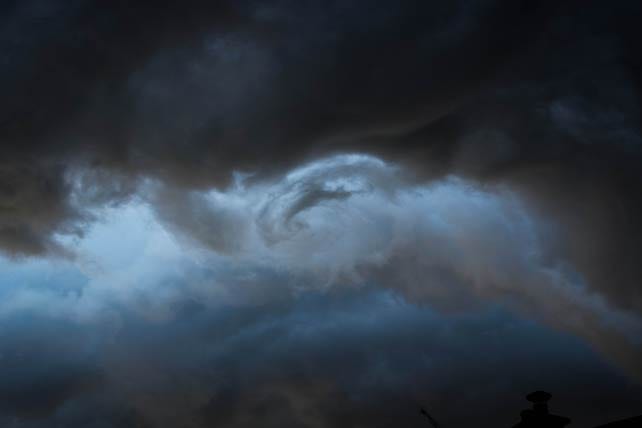 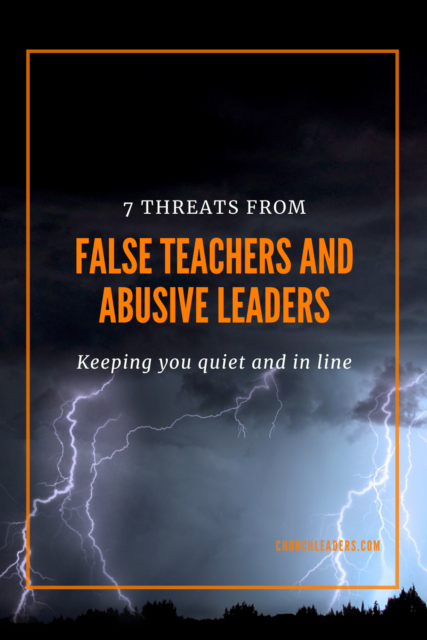 False teachers and abusive leaders need to maintain their power. Therefore, they use a series of threats to keep people quiet and in line. Get out of line? You might hear one of the seven statements I’ve listed below.

Some people who aren’t false teachers or abusers do use some of these from time to time. For example, someone may be accused of behaving like a “Pharisee” because they’re relying on legalism to achieve their righteousness. That isn’t in the context here. This particular post is in the context of a pastor or church leader who is approached by a well-meaning church member concerning teachings that are not faithful to Scripture and are twisted for a desired end.

This phrase is usually directed at those who are trying to convince their church leader to keep his or her teaching in line with Scripture. You may hear this kind of statement after congregants push back against a pastor who gets up one Sunday and starts tossing out random prophecies that don’t come true (or make sense). Another example would be a concerned church member who says, “Pastor, that’s not exactly what God said He would do in His word.” The pastor would respond, “Don’t put God in a box.” The pastor may even tag on one of these other statements to beef up his domineering response.

2. Touch Not the Lord’s Anointed

This threat tends to be used when venerated leaders are opposed for their false and abusive teachings. Their defense? They claim to be “anointed” by God and immune from any accountability and that if you criticize them God will bring judgment upon you. Those who blindly follow them will usually echo this phrase as well as they warn a whistle-blower to keep quiet. Should you ever hear this threat you have nothing to fear. When you “mark” someone who is teaching false things, you are not touching the Lord’s anointed. You are obeying the Lord Himself (Romans 16:17-18).

The Pharisees were not necessarily the best example of what true worship looks like. Even though they were very devout, they were legalistic, twisted God’s word, and burdened people with manipulative teachings that were not a part of God’s Law. They were known to control people with their spiritual arrogance and elitist mentality. Without question, they were a questionable group. Therefore, it’s not surprising when the term “Pharisee” is used in a pejorative manner. This threat from a false teacher gets used when someone holds them accountable for Scripture twisting or loose living. The false teacher will respond claiming, “Don’t be a Pharisee!” Ironically, it is false teachers and abusers who are pharisaic. They add to God’s word, they use their authority to exploit people, and are hypocrites.

4. Be Careful, Religion Put Jesus on a Cross

I remember seeing an outlandish service take place. There were false prophecies flying everywhere, people being “slain in the spirit,” manifestations of people’s bodies that included gyrations, roaring, foaming at the mouth and slithering like snakes. These manifestations appeared demonic but were claimed to be angelic. Some onlookers were very disturbed by the excessive actions taking place in the service and let it be known to the leaders. They were told, “Be careful. It was religion that put Jesus on a cross.” This threat means one thing: Don’t question anything or you’ll be labeled an “anointing killer.” It’s the perfect way to keep people in the dark; causing them to cower in fear that they’re like those who crucified Christ.

When self-proclaimed prophet Todd Bentley beats on people as he prays for them, he says God tells him to. In one service, he bragged about kicking people in the face and beating on old ladies (we wrote about this in Defining Deception so you can check out the footnotes there). Another false teacher I grew up very close to used to do whatever he wanted with the offering money and explained that God gave him permission to. Never trust a leader who justifies sin by saying God commanded it.

6. Donate or God Will Curse You

The famous “give or die” threat has raised a few dollars over the years. Some, like Oral Roberts, have even used the “give or I will die!” fundraising ploy. Is there some biblical truth to principles of giving, receiving and living a generous life? Of course. However, no one should ever trust a leader who says to give money or God will curse (or kill) someone. Back in my BC days (before Christ) I was in the crowd during a fundraiser in which a family was told if they didn’t give money to the building campaign that God would not give the barren mother a baby. Greed makes false teachers say whatever they can to get the mighty dollar.

7. If You’re Divisive, Expect a Disease

When I was 18 there was a family in our church who was leaving because they no longer trusted the leaders. The track record of the church told the story. Mishandling of funds was common. Upon leaving the church they encouraged a few others to leave because it was no longer a healthy place to be. I vividly remember the threat: If you divide the body of Christ then disease will come upon your body. This was common. A pastor within our church once had several leaders invest money into a deal guaranteeing a huge (and quick) return. It sounded too good to be true because it was. A businessman who was near 80 years old simply wanted to be paid back after his money was stolen but was told to keep quiet or else…

When people wonder why publicly calling out false teachers is a big deal, simply ask: Would you point out a known sex offender in a neighborhood full of children? Would you warn others if an active shooter were present in a shopping mall? Would you not pick up your infant if a pit bull entered the nursery? Of course. Then why wouldn’t we be faithful to point out dangers and protect the precious children of God?

There is a coming King who is building His church (Matthew 16:18). His reward will be great for those who stay faithful.