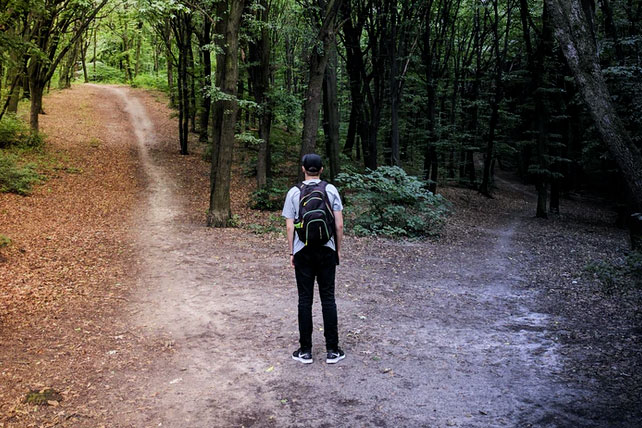 “And deliver all those who through fear of death were subject to lifelong slavery”. –Hebrews 2:15

Here the author of Hebrews is showing how Christ became a man, identified with humanity, and died such a death that the one who held the power of death was ultimately defeated. He delivered us not only from the devil’s reign but also the fear of death which leads to slavery. This leads to a question. How does fear of death lead to lifelong slavery?

I think we get a clue in the Old Testament passages the author quotes right before this verse. He pulls two quotes from Isaiah 8, which is in the context of Isaiah’s “Book of Immanuel.”

The Story of Ahaz

In Isaiah 7 we meet King Ahaz. He’s a young dude at this point, likely in his twenties and he’s leading the nation of Judah. The season in which he was called upon to reign certainly wasn’t a cake walk. Assyria was the big dog at this point in history and they were moving westward. This westward expansion caused Israel (the northern kingdom) and Syria to get antsy. They encourage Judah to join them…but their way of encouragement was to move their troops to the border an flex their muscles and say, “join us or you’re going to have problems”.

We read in Isaiah 7:3, “the heart of his people shook as the trees of the forest shake before the wind.” It’s a scary decision and one demanding the king’s attention. You HAVE to do something Ahaz! On to the scene comes Isaiah the prophet with a word from the Lord for Ahaz. “Be careful, be quiet, do not fear, and do not let your heart be faint b/c of these two smoldering stumps of firebrands.” What God is saying to him is, “trust me. Don’t do anything. Don’t fight them. Don’t cater to them. Don’t join with Assyria. Just do nothing but trust me.”

Let’s put ourselves in Ahaz’s sandals for a moment. What do you think his fears are in this moment? The big one is likely death, right? Or at least that he’ll follow in the footsteps of other kings who end up getting their thumbs cut off and have to become slaves of another nation.

But there are other fears in there too, right? You know that his legacy has to be rumbling around somewhere in the background. The pressure of him being the leader is huge. Others are depending on him. And he has a reputation to uphold. Does he want to be the guy known for being defeated by Syria and Israel? There’s all those common things present in his heart, I can almost guarantee it. Shame. The things that pride makes you do. Fear of dying. Fear of the unknown. Fear of suffering. Desires for comfort. Desire for reputation. All of that weighs on this decision.

What is happening to Ahaz in this moment is that the national question is driving him into a binary choice. Do we join with Israel/Syria? Do we join with Assyria? He can only see those two options and his fear of death is the barometer by which he weighs his options. It is this fear of death which leads to the lifelong slavery the author of Hebrews is talking about. This type of fear cuts off hope because it keeps your eyes on the binary choices of now and blinds you to the gospel’s third way.

You can see this with how Ahaz’s story plays out. God offers Ahaz rest, rule, and relationship and Ahaz rejected it and went after the tangible power of Assyria. So he went into alliance with them. Paid a hefty tribute to them—that means sent them lots of money and valuables. And in doing this he also restructured the temple. Took out elements and put in stuff to the Assyrian gods. He even ended up sacrificing children to the gods of the Assyrians. Cause..safety.

It was fear. We’ve got to preserve Judah. We’ve got to stay in comfort. We’ve got to keep our power. It’s him trying to run from death and he sees that Assyria can help him do it. And Ahaz has the same stuff within him that is present in our hearts as well. That same fear can drive you and I to do similar things. Assyria didn’t look all nasty and have horns growing out of it. It seemed wise. It seemed politically shrewd. He likely even glossed it over with some religious language…we see him doing that later in Isaiah 7. Here is Ahaz trying to get back Psalm 8 rule but it does the opposite. I don’t know if he even consciously realizes that he’s saying, “we don’t want your kingdom, God.” But he does. And he ends up enslaving himself and his people.

How the Gospel Rescues

This is, however, the lifelong slavery that Hebrews 2:15 says Jesus has rescued us from. And so we ought to be people of profound hope because our no longer fearing death rescues us from binary choices of the present.

When we realize that death is no longer something to fear it allows us to have hope even in the present. It would have allowed Ahaz to consider simply trusting in the Lord—even if somehow it led to their death at least he would have been obedient to God. He could still have had hope because he would realize that God’s presence would be with him in Assyrian captivity or if Israel/Syria attacked. God’s presence and pleasure would have been the barometer rather than fear.

We would do well to learn this lesson. We are so often driven by the national questions of each day—and they are gauged by the barometer of fear. Fear of death doesn’t simply mean the fear of no longer having oxygen. It’s also fear of my way of life being taken away. But the accomplishment of Jesus has rescued us from this slavery.

We should live free.

And the possibility that many will read this and think I’m talking about wearing a mask (or not wearing a mask) and social distancing and such shows just how far beholden we are to the national question of each day.