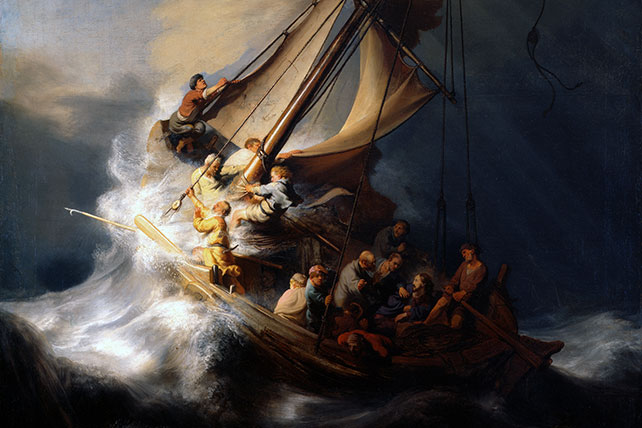 My favorite artist is Rembrandt because of his story, his use of biblical imagery, and the fact he places himself in the paintings he paints. This is what good art does it envelopes you; it swallows you and emerges you into its story. My favorite painting of his is the Return of the Prodigal Son. It’s been the background on my iPhone for four or five years now. I put it on my phone because I wanted to be daily reminded that I am prone to wander like the son, that I growing up in the church and never leaving home left home on my heart, and lastly, I’m called to be the father who loves both those who have wandered far from home and those who have wandered while never leaving home. The gospel points out my sin points me to Christ, and redirects me to run toward sinners. 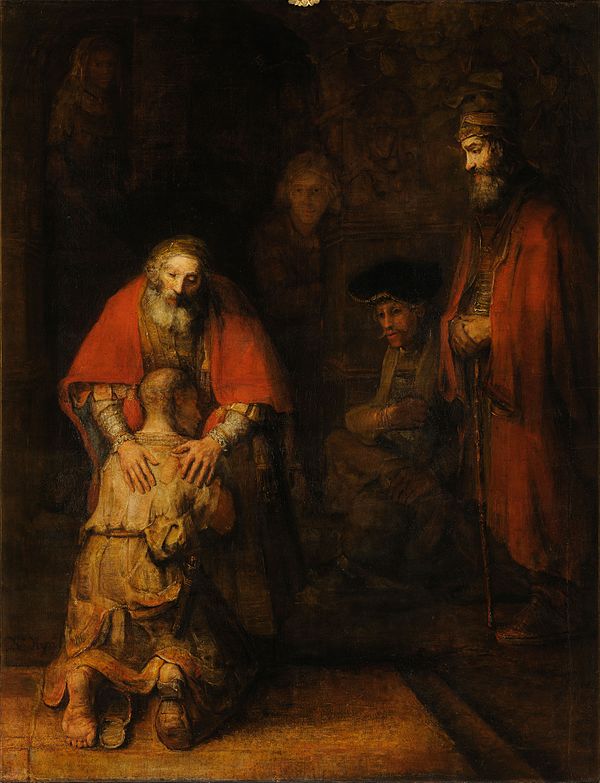 I recently replaced it for the time being with Christ calms the storm. A painting that depicts arguably the best depiction of God’s trust in His Father and our trust in ourselves in all of scripture.

The biblical scene pitches nature against human frailty – both physical and spiritual. The panic-stricken disciples struggle against a sudden storm, and fight to regain control of their fishing boat as a huge wave crashes over its bow, ripping the sail and drawing the craft perilously close to the rocks in the left foreground. One of the disciples succumbs to the sea’s violence by vomiting over the side. Amidst this chaos, only Christ, at the right, remains calm, like the eye of the storm. Awakened by the disciples’ desperate pleas for help, he rebukes them: “Why are ye fearful, O ye of little faith?” and then rises to calm the fury of wind and waves. Nature’s upheaval is both cause and metaphor for the terror that grips the disciples, magnifying the emotional turbulence and thus the image’s dramatic impact.

There are many ironic elements of this masterpiece. The first is the fact it was stolen in 1990 from the Isabella Gardener Museum in Boston. Most experts believe it to be the work of organized crime to be used as ransom to free jailed crime bosses. The irony is that since it was taken, there has been wave after wave of stolen peace in our lives and in our countries collective experience. I do not believe that the theft precipitated our lack of collective peace. It is only a cultural artifact that points to our loss of peace by righting our ship on our terms.

In each of the disciples, you see their reactions to the storm. Some fight with the rigging, some puke over the edge, some run to wake the sleeping Christ. The funny thing is as I study the painting, Rembrandt’s only seascape, I find myself in each of the sailors. I often try to fix things myself; other times, I feel overwhelmed with anxious thoughts, and I’m the guy hanging over the edge of the boat. This picture on my lock screen, and one day a reproduction on my wall, reminds me to run to Jesus.

Another interesting aspect of this iconic work is how, in the middle of the darkness, the face of Christ is lit not from the sun hitting it but from the interior light of God. A light that came to subdue the works of the devil, as John tells us in John 1:4-5 In Him was life, and that life was the light of men. 5 The Light shines in the darkness, and the darkness has not overcome it.

Perhaps the most haunting part of Christ In The Storm On The Sea Of Galilee is Rembrandt himself. Rembrandt was famous for his self-portraits and for placing himself in his paintings in the middle of the action. It was as if he was preaching to us through the canvas. The most famous example of this is during the same year he painted the Sea of Galilee; he painted The Raising of the Cross where Christ was crucified, and his cross was being raised by several men most of them you could not see their faces because of shadows. Rembrandt’s face was bathed in light, telling all who looked upon it that He Rembrandt Van Rijn was the chief of all sinners.

In The Sea of Galilee, Rembrandt is staring out of the painting at you and me and looking at us in such a way as to invite us into the scene. He is saying when the waves come, where do you run. Could you walk through life with a trust that is otherworldly? I think Rembrandt was staring at himself, reminding himself to trust God in the middle of his storms and his storms were many.

Trying to summarize the many misfortunes of Rembrandt’s life can be overwhelming. They are not unlike those of the prodigal son. After having lost his son Rumbartus in 1635, his first daughter Cornelia in 1638, and his second daughter Cornelia in 1640, Rembrandt’s wife Saskia, whom he deeply loved and admired, dies in 1642. Rembrandt is left behind with his nine-month-old son, Titus. After Saskia’s death, Rembrandt’s life continues to be marked with countless pains and problems.

He is looking at us. But his use of light is pointing us to Christ. Rembrandt was not a preacher, but he did preach with his paint, and he did proclaim with his brushes. His legacy is one of someone who, in the middle of the storm after losing three children, pointed us to Christ. He still does. In the middle of 2020 and the sorrows, we have faced and will face, know that Christ your Redeemer is asleep but not inattentive. He reminds us that our Father is mighty and will not perish.