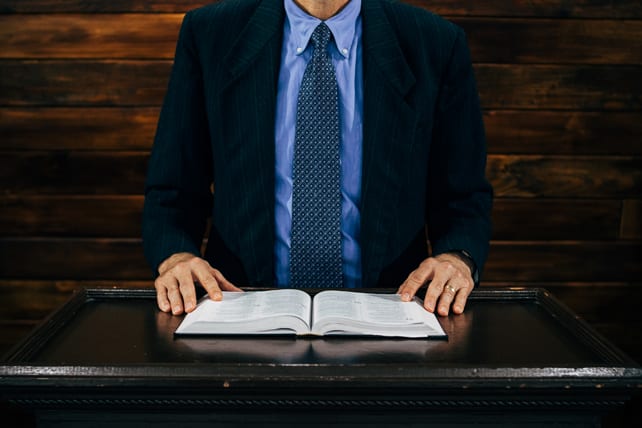 Here are ten pulpit pointers for those who preach and teach the Word of God, as confirmed by some of history’s greatest preachers.

Pulpit Pointer #1. Effective ministry consists not of fads or gimmicks, but of faithfully preaching the truth.

Charles Spurgeon: Ah, my dear friends, we want nothing in these times for revival in the world but the simple preaching of the gospel. This is the great battering ram that shall dash down the bulwarks of iniquity. This is the great light that shall scatter the darkness. We need not that men should be adopting new schemes and new plans. We are glad of the agencies and assistances which are continually arising; but after all, the true Jerusalem blade, the sword that can cut to the piercing asunder of the joints and marrow, is preaching the Word of God. We must never neglect it, never despise it. The age in which the pulpit it despised, will be an age in which gospel truth will cease to be honored. . . . God forbid that we should begin to depreciate preaching. Let us still honor it; let us look to it as God’s ordained instrumentality, and we shall yet see in the world a repetition of great wonders wrought by the preaching in the name of Jesus Christ.

Pulpit Pointer #2. Preaching is a far more serious task than most preachers realize.

Richard Baxter: And for myself, as I am ashamed of my dull and careless heart, and of my slow and unprofitable course of life, so, the Lord knows, I am ashamed of every sermon I preach; when I think what I have been speaking of, and who sent me, and that men’s salvation or damnation is so much concerned in it, I am ready to tremble lest God should judge me as a slighter of His truths and the souls of men, and lest in the best sermon I should be guilty of their blood. Me thinks we should not speak a word to men in matters of such consequence without tears, or the greatest earnestness that possibly we can; were not we too much guilty of the sin which we reprove, it would be so.

Pulpit Pointer #3. Faithfulness in the pulpit begins with the pursuit of personal holiness.

Robert Murray M’Cheyne: Take heed to thyself. Your own soul is your first and greatest care. You know a sound body alone can work with power; much more a healthy soul. Keep a clear conscience through the blood of the Lamb. Keep up close communion with God. Study likeness to Him in all things. Read the Bible for your own growth first, then for your people. Expound much; it is through the truth that souls are to be sanctified, not through essays upon the truth.

E. M. Bounds: The real sermon is made in the closet. The man – God’s man – is made in the closet. His life and his profoundest convictions were born in his secret communion with God. The burdened and tearful agony of his spirit, his weightiest and sweetest messages were got when alone with God. Prayer makes the man; prayer makes the preacher; prayer makes the pastor. . . . Every preacher who does not make prayer a mighty factor in his own life and ministry is weak as a factor in God’s work and is powerless to project God’s cause in this world.

Phillip Brooks: Nothing but fire kindles fire. To know in one’s whole nature what it is to live by Christ; to be His, not our own; to be so occupied with gratitude for what He did for us and for what He continually is to us that His will and His glory shall be the sole desires of our life . . . that is the first necessity of the preacher.

Source: Phillips Brooks, Lectures on Preaching, originally published in 1877. Republished in 1989 by Kregel under the title The Joy of Preaching. As cited in “The Priority of Prayer in Preaching” by James Rosscup, The Masters Seminary Journal, Spring 1991.

Pulpit Pointer #6. The preacher is a herald, not an innovator.

R. L. Dabney: The preacher is a herald; his work is heralding the King’s message. . . . Now the herald does not invent his message; he merely transmits and explains it. It is not his to criticize its wisdom or fitness; this belongs to his sovereign alone. On the one hand, . . . he is an intelligent medium of communication with the king’s enemies; he has brains as well as a tongue; and he is expected so to deliver and explain his master’s mind, that the other party shall receive not only the mechanical sounds, but the true meaning of the message. On the other hand, it wholly transcends his office to presume to correct the tenor of the propositions he conveys, by either additions or change. . . . The preacher’s business is to take what is given him in the Scriptures, as it is given to him, and to endeavor to imprint it on the souls of men. All else is God’s work.

Pulpit Pointer #7. The faithful preacher stays focused on what matters.

G. Campbell Morgan: Nothing is more needed among preachers today than that we should have the courage to shake ourselves free from the thousand and one trivialities in which we are asked to waste our time and strength, and resolutely return to the apostolic ideal which made necessary the office of the diaconate. [We must resolve that] “we will continue steadfastly in prayer, and in the ministry of the Word.”

Pulpit Pointer #8. The preacher’s task is to make the text come alive for his hearers.

D. Martyn Lloyd-Jones: As preachers we must not forget this. We are not merely imparters of information. We should tell our people to read certain books themselves and get the information there. The business of preaching is to make such knowledge live. The same applies to lecturers in Colleges. The tragedy is that many lecturers simply dictate notes and the wretched students take them down. That is not the business of a lecturer or a professor. The students can read the books for themselves; the business of the professor is to put that on fire, to enthuse, to stimulate, to enliven. And that is the primary business of preaching. Let us take this to heart. … What we need above everything else today is moving, passionate, powerful preaching. It must be ‘warm’ and it must be ‘earnest’.

Source: D. Martyn Lloyd-Jones, “Jonathan Edwards and the Crucial Importance of Revival.” Lecture delivered at the Puritan and Westminster Conference (1976).

Pulpit Pointer #9. The preacher is to be Christ-exalting, not self-promoting.

R. B. Kuiper: The minister must always remember that the dignity of his office adheres not in his person but in his office itself. He is not at all important, but his office is extremely important. Therefore he should take his work most seriously without taking himself seriously. He should preach the Word in season and out of season in forgetfulness of self. He should ever have an eye single to the glory of Christ, whom he preaches, and count himself out. It should be his constant aim that Christ, whom he represents, may increase while he himself decreases. Remembering that minister means nothing but servant, he should humbly, yet passionately, serve the Lord Christ and His church.

Arthur W. Pink: The great work of the pulpit is to press the authoritative claims of the Creator and Judge of all the earth—to show how short we have come of meeting God’s just requirements, to announce His imperative demand of repentance. . . . It requires a “workman” and not a lazy man—a student and not a slothful one—who studies to “show himself approved unto God” (2 Tim. 9:15) and not one who seeks the applause and the shekels of men.