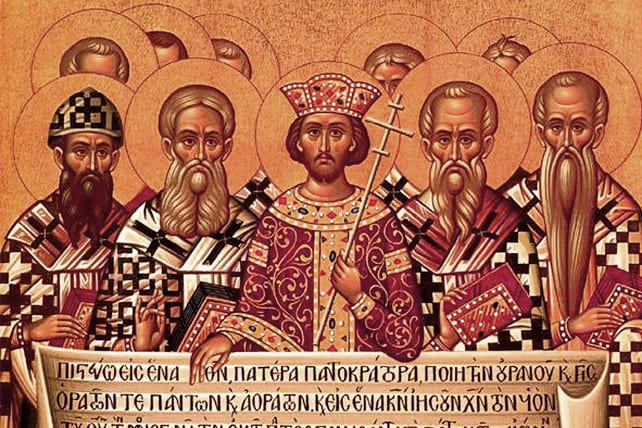 Where does the Nicene Creed originate from? If you were a Christian living in the great port city of Alexandria, Egypt in the year 320, your life would likely be full of excitement. Less than 10 years before, the great Emperor Constantine had defeated his enemies, ended Roman persecution of Christians, and granted Christianity the status of a favored religion. You no longer needed to fear arrest, torture or imprisonment simply for being a believer in Christ.

All across the city, the churches and the believers were emerging from the only life they had ever known–fear of opposition–and enjoying the fresh air of freedom. Alexandria was famous for its rich tradition of Christian thinkers; now more than ever, men were considering and expressing their faith. And so even if you were the humblest disciple in the city, you’d know something of the debates that soon began to swirl around the believing community. A highly-respected Presbyter–a mature, seasoned man who was an able preacher and popular pastor–was beginning to have a serious conflict with the city’s Bishop.

The disagreement was doctrinal, and had everything to do with the person and work of Jesus Christ. The presbyter, Arius, used his popularity and abilities to spread his doctrine through the Christian population. One of the methods used among the people was a series of short choruses, sung or chanted by young and old, expressing Arius’s particular doctrine. It was a brilliant method! The Scripture says that we are to teach one another in Psalms, Hymns and Spiritual Songs–and this is what the followers of Arius did.

One of their choruses is strikingly illustrative of their doctrine and method. Being a Greek speaking city, the chorus was in Greek, and consisted of only five words, only 7 total syllables (a perfect chorus). The first word and the last are the same, while the second and third words rhyme: “ην ποτε ὁτε ουχ ην” (ēn pote hote oukh ēn). You can hear that it is lyrical and simple. One author says that it was chanted over and over, in church and daily in the streets of the city by those who believed its doctrine.

What does it mean? It’s somewhat difficult to render exactly into English, but it goes something like this: “There was when he was not.” Repeatedly, in church and in the city, the huge community of the followers of Arius chanted this and similar choruses to teach, promote and strengthen their view.

The “he” is Jesus Christ–“There was when Christ was not.” This small change in wording makes the chorus a little more startling, and perhaps easier for us to understand. In the doctrinal system of Arius and his followers, Jesus Christ, as great as he may be, is a created being, brought into existence by the power of the one true God. He is the firstborn of all creation–greater than all the rest for sure, but still–a created being–not deity. At some point in eternity, God created Jesus Christ. The chorus was a teaching tool, a piece of propaganda for Arius’s doctrine.

As this teaching grew and spread, it was opposed by the bishop of Alexandria–Alexander (!). He understood the seriousness of the teaching and its implications, and so he held a public inquiry into the matter. This resulted in the suspension of Arius from his ministry. But that was only the beginning of the trouble… a trouble which would last for another 70 years!

Arius had powerful friends outside of Alexandria. In 324, when Constantine became sole ruler of West and East, he sought to develop favorable relationships with Christian leaders from the east. Among them were Arius’s greatest supporters, who appealed to the Emperor to intervene and restore Arius to his position in the Alexandrian church. Feelings throughout the empire ran high. There was great debate, political maneuvering, and ecclesiastical disorder.

Seeing this, Constantine called a council, which would held at Nicaea in 325 under his personal control. With about 220 bishops in attendance, this has been called the first great council of the church. Through much debate, 218 of the bishops adopted a thoroughly orthodox creed, and Arianism–at least for the time–seemed to have been defeated.

There are two versions of this creed, a shorter and a longer. The Nicene Creed (proper) comes from the Council of Nicea in AD 325 and is the shorter version; a revised and expanded version (which is the more common Nicene Creed today) comes from the Council of Constantinople in 381. The original form of the Nicene Creed was intended to guard the deity to Christ; the second and expanded version speaks more directly to the person and work of the Holy Spirit.

This creed is deeply rooted in the text of Scripture. The authors were committed to the authority of Scripture and sought to mine its depths and express its doctrine carefully.

Here is the revised Nicene Creed as found in Schaff, Creeds of Christendom:

We believe in one God, the Father Almighty, Maker of heaven and earth, and of all things visible and invisible.

And in one Lord Jesus Christ, the only-begotten Son of God, begotten of the Father before all worlds, Light of Light, very God of very God, begotten, not made, being of one substance with the Father; by whom all things were made; who for us men, and for our salvation, came down from heaven, and was incarnate by the Holy Ghost of the Virgin Mary, and was made man; he was crucified for us under Pontius Pilate, and suffered, and was buried, and the third day he rose again, according to the Scriptures, and ascended into heaven, and sitteth on the right hand of the Father; from thence he shall come again, with glory, to judge the quick and the dead; whose kingdom shall have no end.

And in the Holy Ghost, the Lord and Giver of life, who proceedeth from the Father, who with the Father and the Son together is worshiped and glorified, who spake by the prophets. In one holy catholic and apostolic Church; we acknowledge one baptism for the remission of sins; we look for the resurrection of the dead, and the life of the world to come. Amen.

The Nicene Creed is accepted by all branches of orthodox Christianity, and its doctrines are considered definitive. If any seemed to introduce a new doctrine, they were examined according to Scripture and the Nicene-Constantinopolitan creed, and urged to conform to it.

This article about the Nicene Creed originally appeared here.