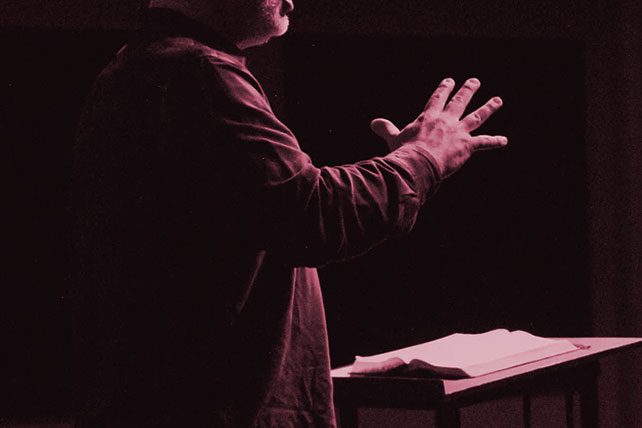 I really want to be a good listener. A couple of times over the past couple of weeks, though, I’ve found myself drifting while somebody’s talking to me. And then, at the end, it’s become clear to both of us that I’ve missed some important detail in the conversation, and I’ve had to admit that I wasn’t paying complete attention — frankly, because I lost interest in the conversation.

This happens sometimes, especially when somebody is talking about a subject that’s important to them, but not as important to me. When someone else is interested in a topic and you’re not, it’s easy for our minds to drift.

To be honest, that’s what could happen with the passage we’re looking at today.

We’re studying a letter written by the Apostle Paul, the last letter he ever wrote. It’s written to his protégé Timothy. And there’s a theme that keeps coming up. We’ve been looking at it for the past few weeks. Here’s the theme: People are going to abandon Jesus, but you’ve got to stand firm because it really matters.

Paul wasn’t just prognosticating from prison. All throughout this letter, Paul speaks from personal experience. Look at what he says later in this letter:

Alexander the coppersmith did me great harm; the Lord will repay him according to his deeds. Beware of him yourself, for he strongly opposed our message. At my first defense no one came to stand by me, but all deserted me. (2 Timothy 4:14–16)

You can understand Paul talking about this. Paul was in jail and about to die because he preached the message that Jesus is Lord. But everybody in Asia had repudiated him, and many had repudiated his message. And Timothy had people in his church who were wobbling on the message of the gospel. It’s no wonder Paul kept returning to this theme.

But as we look at the passage today, we may be tempted to say, “Darryl, this is the third sermon in a row that you’ve covered what Paul says about false teaching. It’s clear that Paul has a lot to say about this, but really, I’m not as interested as he is. Please, can we move on to something else?”

Well, yes and no. Here’s the no part: we need to take one last look at why this matters even if we don’t like it. And then we need to look at the biggest step we can take as a church to inoculate ourselves against this danger, because we’re not immune to this danger either.

So that’s what we’re going to do today. What is the danger we face, and what can we do about it?

When we last looked at 2 Timothy, Paul told Timothy to correct his opponents gently, because “God may perhaps grant them repentance” (2 Timothy 2:25). That sounds hopeful. Maybe there’s hope for false teachers. Maybe some of them can come to their senses. Not all is lost.

But Paul’s more realistic than this. In the passage we just read, Paul says:

But understand this, that in the last days there will come times of difficulty. For people will be lovers of self, lovers of money, proud, arrogant, abusive, disobedient to their parents, ungrateful, unholy, heartless, unappeasable, slanderous, without self-control, brutal, not loving good, treacherous, reckless, swollen with conceit, lovers of pleasure rather than lovers of God, having the appearance of godliness, but denying its power. (2 Timothy 3:1-)

It’s true that some may repent, Paul says. But opposition isn’t going anywhere. False teachers will actually increase. The “last days” he mentions doesn’t refer to a distant time in the future. The “last days” refers to the period that goes from Jesus first coming to his future return. In other words, we’re living in the last days. This is the present. So what Paul writes here is going to be true of us as well.

“In the last days there will come times of difficulty.” The word difficulty is a little mild for the term that Paul uses. A better word may be fierce. There are going to be fierce seasons in the season between Jesus’ first and second comings.

In verses 2 to 5, Paul describes the people who will cause problems in the last days. It’s quite the list. There’s nothing positive about this list. And so it’s important for us to understand what’s behind the traits that Paul lists here.

There’s a belief out there — it’s very common — that people generally mean well, and so our major problem is we just see things from different perspectives. If that were the case, we just need to work hard at understanding where others are coming from so we can find common ground and agree. And certainly there’s a lot of truth in this perspective, and this is the appropriate action we should take much of the time.

But if that’s your only category for disagreement, and if that’s your only approach to handling disagreement, you will not be prepared for what’s coming in difficult days. Because Paul says in this passage that what is behind some disagreement in the church — not all, but some — is not misunderstanding but rather pure evil. It’s not motivated by a different perspective, but by a love of self and a desire to decide for ourselves what’s right.

It is important to grasp that it is men who are responsible for the menacing seasons which the church has to bear, fallen men, evil men, men whose nature is perverted, whose behavior is self-centered and godless, whose mind is hostile to God and his law (cf. Rom. 8:7), and who spread evil, heresy and dead religion in the church. (John Stott)

The question I want to ask you is: do you have a category for this? If you don’t, you’re not really prepared for one of the greatest dangers that the church always faces. Some false teachers aren’t just misinformed. Some are narcissistic and proud. Some are evil. Not everyone who has something to say about God is motivated by good. Their character is off. Their devotion to God is fake. Some have the appearance of godliness, but deny its power.

He even compares them in verse 8 to Jannes and Jambres. Jewish tradition said that these were the names of the two chief magicians in Pharaohs’ court. Moses was one of the greatest of God’s servants in the Hebrew Scriptures, sent by God himself with a message for Pharaoh and the ability to do miracles as a sign to Pharaoh that God was speaking. But we read in Exodus, “Then Pharaoh summoned the wise men and the sorcerers, and they, the magicians of Egypt, also did the same by their secret arts” (Exodus 7:11). They were able do the same things as Moses without having the same godliness as Moses. They were counterfeits. Counterfeits existed in Moses’ day. They existed in Paul’s day. And they exist today.

That’s why you need to have a healthy concern for whatever is taught in this church. That’s why teachers will be judged with greater strictness (James 3:1). It’s why you should double-check everything that I or anyone says with the Bible. We should be on guard because of the danger of counterfeits and people who appear to be okay, but are actually dangerous.

The worst part is the influence they have on others. Verses 6 to 9 say that they end up taking others with them. They “capture” other people, according to verse 6. It’s like a military operation. It seems that these false teachers had found disproportionate influence among some of the women in Ephesus. Paul’s not slamming women in general; he’s speaking to a particular situation in that church. I love Paul’s description: “always learning and never able to arrive at a knowledge of the truth” (3:7). I’ve seen this! Always raising questions. As Acts 17 says, some people “spend their time in nothing except telling or hearing something new” (Acts 17:21).

Paul’s asking us to add two categories in our understanding of who’s in the church. Truth be told, we may be in one of them.

Please, please, please understand that these two categories of people exist: evil people spreading false teaching, and unsuspecting people who are in danger of being led astray. Just as parents have to teach their kids that there are dangerous people out there, Paul us teaching us that there are dangerous people out there with evil motivates, and we have to be on guard so that we’re not sucked in and captured by them.

Okay, so what we can do about it?

Paul is very clear. He issues two commands in this passage that we must follow if we’re going to avoid the danger he’s just described.

Here’s the message of this passage in two sentences: Evil teachers will try to capture gullible followers. Avoid the false teachers and stay close to the gospel.

Because of an accident, Google Maps one day rerouted dozens of drivers down a dirt road on the way to Denver International Airport. About 100 drivers drove down the private dirt road that had been flooded after recent heavy rainfall. Most of the motorists became stuck behind a few cars that had become bogged down in mud.

One driver said, “My thought was, ‘Well there are all these other cars in front of me so it must be OK.’ So, I just continued.” Fortunately, those with all-wheel drive vehicles were able to get through.

That’s pretty much what Paul is saying in this passage. Stay close to the truth about Jesus. And if someone comes along and it looks like they’re trying to take you where you shouldn’t be doing, turn around and try again.

Evil teachers will try to capture gullible followers. Avoid the false teachers and stay close to the gospel.

Father, keep us close to the truth about Jesus through the power of your Spirit. In Jesus’ name. Amen.