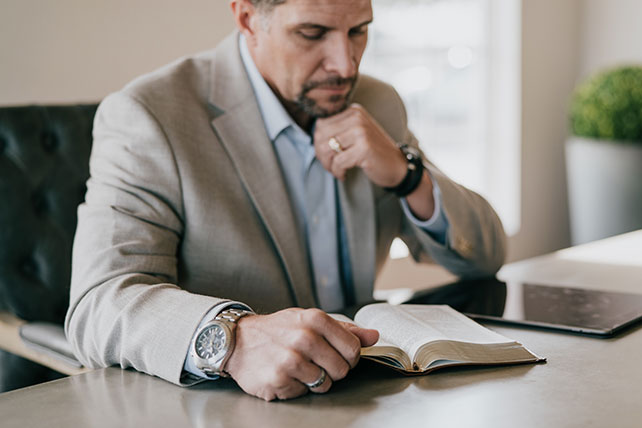 It is a shared experience that ministers of the gospel simultaneously find the preaching of God’s word to be a most joyous and a most burdensome task. It is a joyous task, insomuch as one recognizes that the Kingdom of God advances as the Scriptures are faithfully proclaimed. It is a burdensome experience on account of the fact that ministers often feel as though they have never proclaimed God’s word skillfully enough (not to mention the fact that delivering a public monologue once or several times a week is a challenge in and of itself). A man who is called into the ministry of the gospel ought to desire growth in this most sacred task. However, the better part of ministers I know feel lost about how they can improve their preaching.

Recently, a company of pastors—of which I have been a part for 8 or so years—was discussing what practical steps a minister can take in order to improve his preaching. Here are a some of the thoughts that emerged from that discussion:

1. Never Assess Your Preaching on Monday. Ministers are worn and discouraged on the Monday after they have preached. Seasons of dispondancy or discouragement are never good times to self-critique. There is wisdom to waiting until Tuesday or Wednesday to think about what you could have done or said differently in the sermon you recently preached.

2. Don’t Confuse Improvement with Effectiveness. So often we confuse wanting to be effective with wanting to be skilfull. A man may preach a sermon that is magnificently crafted from an exegetical, theological, applicatory, and homeletical standpoint, while having it seem to fall on deaf ears. We never know what the Lord is doing in sending His word out at any given time. As Paul reminds the Corinthians, “One man plants, another waters, but God gives the increase.” That increase might happen sooner or later. It may be that God is silently sanctifying one or many of His people under the ministry of the gospel. It may also be that God is hardening the hearts of some who hear. There is no biblical call for ministers to assess the effectiveness of their preaching. However, a man can labor to critique his skillfulness in preaching God’s word. We must resist the urge to conflate these two distinct outcomes.

3. Run the Text Past Other Pastors Prior to Preaching. I have often sought to get feedback from faithful and gifted friends in ministry prior to preaching a particular passage of Scripture. This may happen at the beginning of the week, prior to preaching, or it may happen on Sunday morning prior to the service. If you have an especially difficult passage of Scripture–and you have done the hard work of exegetiing and preparing your exposition–it can be beneficial to run what you are wanting to say by a gifted friend in ministry. This is one of the best ways to glean new insights about what you plan on preaching or to make sure that you communicate some point clearly.

4. Listen to the Best Preachers on the Passage Your Preach. I have long listened to other preachers, for the simple reason that I want to become the best preacher I can possibly be. If I were a doctor, I would want to learn from the best doctors in my field. This goes for every other profession. To that end, I recommend that ministers listen to the best preaching on whatever passage they are preparing to preach. Sinclair Ferguson, Eric Alexander, William Still, Edward Donnelly, Martyn Lloyd-Jones, Ian Hamilton, Derek Thomas, and Iain Duguid are some of my go-to preachers (I clearly have a penchant for the expositional preaching of the Brits). You can not only learn exegetical, theological, and church historical insights from their preaching, you can study their delivery in order to learn what makes them skilfull public speakers. Labor to integrate (without verbal imitation or plagiarizing) the best of their preaching into your own.

5. Self-Critique Every Sermon You Preach. This may be one of the more challenging steps for ministers; however, it is one that is vital to improvement. I have listened to almost every sermon I have ever preached within days of preaching. Listening to the sermon audio and watching a sermon video is the best way to learn how to self-critique. Of course, you have to be your own biggest critic. Sadly, I have known men who made it clear that they never want feedback on their preaching. Such people think that they were more gifted than they actually were. If you truly want to improve in preaching then you will be your own biggest critic. Painful as it may be to listen to or watch your preaching, it enables you to identify areas that need improvement–whether in your message, in your delivery, or in your body language.

6. Seek Feedback from Family Members. No one knows you better than your wife and children. I have valued the critique of my wife more than any other since she knows me better than anyone. If I am speaking too quickly, if my points are not clear and easy to follow, if the sermon was too long, or if I failed to bring it to an end smoothly, she will often let me know. Of course, she does this in a constructive–rather than demeaning way. Otherwise, it would not be unhelpful to a minister to get feedback from his wife! I have other friends in ministry who also currently find the feedback of their teenaged children (who are now spiritually mature enough to give it) to be valuable to their growth as a preacher.

7. Seek Feedback from Friends. If you have thoughtful friends in ministry, you may wish to ask them to listen to a sermon you preached occasionally in order to give you feedback. This can be a great help since they know you personally and can offer criticism that you will receive from a friend. It is not helpful to ask a minister you do not know well to give you feedback, since he likely has no framework about your life or ministry.

8. Weigh Lightly the Praises of Congregants. This is vital to a right assessment of your preaching. Most congregants simply want to encourage a minister of the gospel. This means that–especially in Southern churches–members will be less likely to give negative feedback and more likely to only praise your preaching. In every church, there will be those who like to poke and make perpetually critical comments. Demoralizing comments should be given little weight as well. However, the Scripture constantly teaches us that the praise of people is fickle. Don’t let the little praises of men puff you up and ultimately stunt your growth as a preacher.

9. Listen to the Difference in Your Preaching Over a Decade. When I was in seminary, I had a professor who said, “Don’t assess your preaching until you have been in ministry for at least five years.” This is sage advice. If I listen back to a sermon I preached nine or ten years ago, it is painful. At the time, I am certain that I thought I was a better preacher than I truly was. I sometimes listen to a sermon I preached in the first three or four years of ministry in order to contrast it with a sermon I preached ten to twelve years in ministry. That is one of the surest ways to discern how you have improved as a preacher. It also fosters a self-criticism that reminds you that you can always improve more.

10. Read Thoughtful Books on Preaching. In the early days of ministry, I read every homiletical book, article, essay, and blog post I could find. That slowly stopped ceased to be a regular part of my pastoral development. However, in recent years I have returned to the practice of studying preaching as a discipline. Martyn Lloyd-Jones Preaching and Preachers (both the publication and the audio lectures), Sinclair Ferguson’s Preaching Christ from the Old Testament, Edmund Clowney’s Preaching Christ in All of Scripture, J.C. Ryle’s Simplicity in Preaching, and J.W. Alexander’s Thoughts on Preaching are a few of the preaching resources to which I have recurrently returned. Whatever volumes you find helpful, employ them as a guide to help analyze, critique, and improve your own preaching.

Since the preaching of the gospel is the primary means by which God saves His people, ministers of the gospel should concern themselves with pursuing growth in their ability to skilfully communicate the truth of Scripture. Pastors should avail themselves of all the means of growth that are at their disposal. In so doing, we may never become the best preachers in the world, but we will–by God’s grace–become more skillful in making known “the unsearchable riches of Christ.”