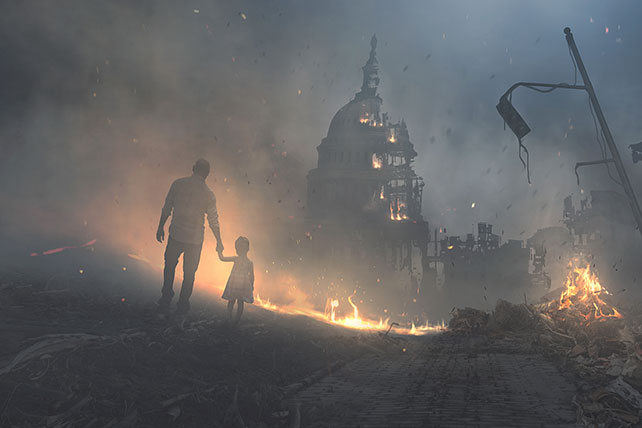 The problem is that we have a limited view of our history. The Pandemic has caused many difficulties, but it is nowhere near as deadly as the Bubonic plague, smallpox, or other outbreaks in history. Take the 1666 outbreak of plague in London, where one in six people died. It was indiscriminate in its victims with no regard for age, sex, or health. Also, we forget that we have seen social and political unrest throughout our history. For Americans, the Twentieth century was a time of social change, especially in the rights of minorities. In Great Britain, we start to see the decline of the empire. On the European continent, nations were rocked by two world wars, the second at the hands of Fascists, who, along with Marxist Russia, brought evil into the world on a staggering scale. This year is not the first or even the worst that the world has seen.

History teaches us that wars, pestilence, and evil have always ravaged this sinful world. But we as Christians know that there is a day coming when Christ will consummate his Kingdom. When talking about end of the world, it is easy for us pastors to discuss our Millennial view, and while that would be interesting for us theology types, it probably is not what the average Christian needs to hear. What do we tell people who are worried and asking about the end of the world?

The place to begin is with the gospel. People need to know their need for Christ and the eternal danger without faith in Jesus. It is easy for people to get caught up in the prophesies and signs and miss Jesus. However, the second coming’s reality should cause sinners to seek and cling to Christ and the gospel. We need to know God wins and His people will win with Him.

What do we tell believers about the end of times? I think the answer is simple, be faithful disciples of Jesus. That sounds oversimplified. However, this is what the church is called to be until he returns. We read and study God’s Word and make every attempt to live by it in our lives. The thought of the second coming should drive us to the Bible; it should force us to our knees; it should move us beyond speculation to see the church’s theology concerning the end times.

Again, how do we prepare for Christ’s return? We live for God. In my youth, I listened to a Christian Rock Band called Allies. Bob Carlisle, who would later sing “Butterfly Kisses”, was their lead singer. One of their songs said this, “If you believe he’s coming back tomorrow, oh, then live like he is coming back today.” That line in the song has always stuck with me. Is this not what Peter meant when he wrote,

[7] The end of all things is at hand; therefore, be self-controlled and sober-minded for the sake of your prayers. [8] Above all, keep loving one another earnestly since love covers a multitude of sins. [9] Show hospitality to one another without grumbling. [10] As each has received a gift, use it to serve one another, as good stewards of God’s varied grace: [11] whoever speaks, as one who speaks oracles of God; whoever serves, as one who serves by the strength that God supplies—in order that in everything God may be glorified through Jesus Christ. To him belong glory and dominion forever and ever. Amen. 1 Peter 4:7–11(ESV)

We see the idea of the end, but what are we told to do? Keep on living the Christian life doing all things to God’s Glory.

We need to remember that God is not a fickle god who likes to trick us. He is not going to change up salvation or require secret knowledge. Instead, we must remember that He is our heavenly father. He hears and answers our prayers. He has promised that we are his forever, and he will not abandon one of us who is truly his by faith in Christ (Daniel 12:1). I do not know what the mark of the beast may be. However, I do trust that the Holy Spirit is at work in my heart and mind (John 14:26), that the word of God is a light to my path (Psalm 119:105), and that when I cry out for wisdom, the Lord has promised to give it (James 1:5). God takes care of his people. He takes care of us throughout life, and he will take care of all of us in and through the second coming (1 Thessalonians 4:16-18).

Let me close by quoting part of a poem from John Greenleaf Whittier.

“Twas on a May-day of the far old year

Seventeen hundred eighty, that there fell

Over the bloom and sweet life of the Spring

Over the fresh earth and the heaven of noon,

In day of which the Norland sagas tell,

The Twilight of the Gods. The low-hung sky

Was black with ominous clouds, save where its rim

Was fringed with a dull glow, like that which climbs

The crater’s sides from the red hell below.

Birds ceased to sing, and all the barnyard fowls

Roosted; the cattle at the pasture bars

To hear the doom-blast of the trumpet shatter

The black sky, that the dreadful face of Christ

Might look from the rent clouds, not as He looked

A loving guest at Bethany, but stern

As Justice and inexorable Law.

Meanwhile in the old State House, dim as ghosts,

Sat the lawgivers of Connecticut,

Trembling beneath their legislative robes.

“It is the Lord’s Great Day! Let us adjourn,”

Some said; and then, as if with one accord,

All eyes were turned to Abraham Davenport.

He rose, slow cleaving with his steady voice

The intolerable hush. “This well may be

The Day of Judgment which the world awaits;

But be it so or not, I only know

My present duty, and my Lord’s command

To occupy till He come. So at the post

Where He hast set me in His providence,

I choose, for one, to meet Him face to face,

No faithless servant frightened from my task,

But ready when the Lord of the harvest calls;

And therefore, with all reverence, I would say,

Let God do His work, we will see to ours.

Bring in the candles.” And they brought them in.”

Christians, we have lived in a dark year. The darkness of Pandemic and unrest has many people thinking of the last day. If Christ does come back soon, may He find all of us doing our Christian duty. May we encourage those that are curious or even fearful to seek Christ and follow Him!