When Jesus came 2,000 years ago, he built Jesus community. He did not just offer a message of salvation that resulted in a different belief structure. He offered a different way of life—called the kingdom of God—that included a different kind of vision for community. The Jesus kingdom was not something anyone would have expected. No one—this cannot be reiterated enough—no one could have predicted that God’s way would look like self-sacrificial love hanging on a cross. The king the nation of Israel expected was not supposed to die.

The Israelites of the first century expected a normal king—their word for this was “Messiah,” which is christos in the Greek New Testament—but that’s not what they got. And most did not see what was going on. John put it this way: “The true light that gives light to everyone was coming into the world. He was in the world, and though the world was made through him, the world did not recognize him. He came to that which was his own, but his own did not receive him” (John 1:9-11). They did not have ears to hear Jesus and his way.

The people of Israel had a different imagination for the kind of kingdom God would bring, and this included a specific vision for community. Four popular versions of community of the time illustrate this point:

A realistic vision for the kingdom: This was the strategy of the Sadducees and the Herodians. These two groups, each in their own way, asked, “What is possible within the circumstances at hand?” Since the Romans were in charge, they tried to make the best of things and work within the rules of the power brokers.

A radical vision for the kingdom: The Zealots took this approach. They sought to establish Israel by meeting the violence of the Romans with equivalent violence. They were training to drive out the Romans with power.

An exclusive vision for the kingdom: A group called the Essenses adopted this strategy. They withdrew to the desert to escape the pollution of the culture so they could set up the new kingdom of God in pure form.

An ideal vision for the kingdom: The Pharisees followed this pattern. While they lived among the populace, they established an ideal way of doing “church” that separated themselves from the culture at large. Their goal was to find the right way to serve God so that others would join them and thereby usher in the kingdom of God.

Jesus vision did not fit any of these paradigms and, as a result, most people did not see or hear what Jesus was up to. He created a kingdom of God movement by establishing a Jesus community that stood in contrast to the popular versions of community at the time.

Realistic community: Instead of starting with God’s dream to redeem all things, we start with the realities we face in life. Since we are busy, overwhelmed and underresourced, we look at how we can lead groups in a way that does not infringe too much on group members. We lower expectations to something like “attend the meeting.”

Radical community: With these group leaders, there is no room for compromise. They call Christians to step out and go above and beyond, to sacrifice to extremes. Activism, mission and outreach consume small groups that take this approach. Zealous progress toward passionate Christianity and getting something done for the kingdom is the focus. The focus too often lies so much on the action or the mission that these groups end up doing violence to others and themselves. They rally around the cause, but in doing so they miss the way of Jesus.

Exclusive community: The most common form this takes is called “Bible study.” We get together to talk about the information of the Bible and learn some very good facts about the Bible. Insider information shaped by insider language creates a group that has little to do with normal life outside the group, and new people are welcome only if they speak our language.

Idealistic community: Idealism causes us to find the “right” way of doing church and small groups. We assume that if we unlock this right way, we will unlock the life of God in our midst. Usually this involves arguments about the way the early church operated and how to follow that biblical approach. Here’s the problem: Through the years there have been so many “right” interpretations of the way New Testament house churches operated that any claim to rightness can be countered endlessly. We just don’t have enough detailed explanation about first-century house churches to define an ideal New Testament model.

Jesus offers us something that we all want, but we cannot produce. We can produce the four visions of community listed above. But only the life of Christ through the power of the Spirit can generate Jesus community.

We enter into this life by embracing the three rhythms of Jesus life together. 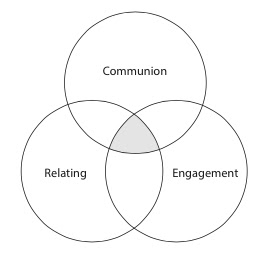 Discipleship or spiritual information is simply learning to do these three things with one another.

The truth of the matter is that this is really not that complex. There is no secret path to lead your group into Jesus community. It’s really about making the space in our life together so that the Spirit can teach us an alternative pattern of Jesus spiritual formation. We want some kind of plan or program that will produce this kind of life. But it just does not exist. The Spirit does not work that way.

However there are some things we can do in order to make this kind of space for the Spirit to work in our groups or in our relationships:

1. Work with people who are expressing a desire for more than just attending a small group meeting. A sign that the Spirit is working in people is found when people are stirred up and dissatisfied with mediocrity. You cannot force this or will your group into this kind of life. Pray for the Spirit to raise up a hunger.

2. Enter into conversations over meals—food really helps create an environment to talk about what the Spirit is doing—with those who want more. Ask questions of one another and see where the conversations lead. I offer some questions around Jesus community in my book Leading Small Groups in the Way of Jesus (pages 56-62).

3. Experiment with some communal spiritual practices that will shape a different way of being in community with one another. I offer some examples in my book Missional Small Groups. You cannot program Jesus community. You discover it.

Just as Jesus led his followers down an alternative path that no one expected, the Spirit of Jesus wants to do the same today. In fact, this is already happening. The question for us is: Are we making space in our personal lives and in our life together—whether in our groups, with our families or in our friendships—to hear what the Spirit is saying.

Check out our other articles for small group leaders.

Closed Group vs Open Group – Which Is Best?

Small Group Pastor: You Don’t Have to Know Everything

Does God Call Leaders? Who Is Qualified?

Why Small Groups Should Not Try to Fix Others

A Simple but Radical Shift in Small Group Formats