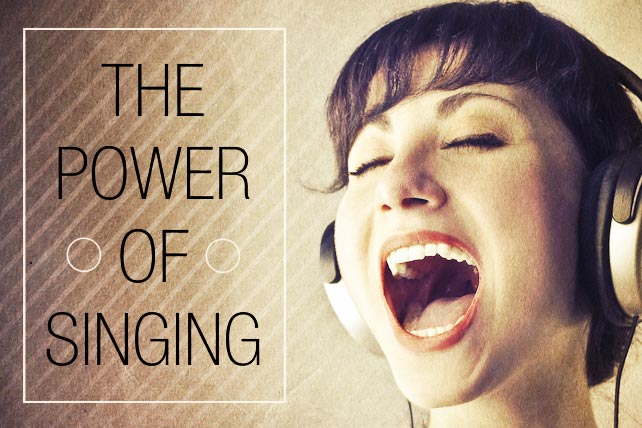 Oh, sing to the Lord a new song! —Psalm 96:1 Few believers understand the power of singing. Worship is not just a “warm-up” to the sermon. Singing opens the way for an increase of the Holy Spirit’s overflow in us, as well as an unfolding of discernment regarding His will in our lives. It is by the creative capacity of speech and song given to us by God that man has, among other ways, been glorified above other creatures. The mime of birds is not self-initiated speech. We speak of birds singing but what we call singing, as lovely as it may be, is not song.

Song is a powerful instrument because it is so basic to worship. When it is worked out in the experience of our daily life, it becomes a manifestly powerful means of sustenance, triumph, creativity, deliverance, and ongoing growth and development in the way of the Lord.

Exercise the gift of song, no matter the quality of your voice

A sense of inadequacy about the quality of one’s voice can cripple a believer into fear of singing or entering boldly into worship. The world causes us to draw comparisons, but to the Lord, there is a distinct beauty to everything He’s created. When it comes to the matter of our singing voice, if we will exercise and be faithful in the few things God has given us, He says He will make us rulers over many. People who sing praise and don’t worry about how it sounds see the glory of the Lord begin to break forth in their voice. Don’t allow the spirit of this world to stifle the song God wants to bring from your lips. His Word says there is no sound that is without significance (1 Corinthians 14:10). Ask the Lord to make you an anointed singer of praise and quit laboring with the matter of how you think it sounds.

A personal story about the power of singing:

We don’t enshrine history or hold sacred a few moments that we hearken back to because it’s a ritual or tradition with us. But if you will allow me to tell you this story about something that happened at the inception of God’s grace at The Church On The Way, it is a reminiscence that helps us be reminded of how I first learned some of the principles of release of Jesus’ life and power among His people.

Two weeks after I first stepped into the building that was then The Church On The Way, in February 1969, I took the pastorate of the church. There were only 18 members and an average attendance of 25 people. The key to understanding where the church was at that time was to understand what I discovered—not about the number of church members, but about a hideously oppressive spirit that existed in that place. I had no formula response to it. The only response I knew was what I felt prompted to do.

I think that to suggest that there are spirits of oppression that have to do with buildings can sound superstitious and bizarre to some people, but I don’t have any question that such things do occur. I didn’t say anything to anybody about it. One of the people in the congregation mentioned it to me. He acknowledged his sense of a terrible presence that was so oppressive to anything it seemed God would like to do. It wasn’t his saying it to me that brought it to my awareness. The first time I came into the room, I felt it.

The way it manifested in services was that it was almost impossible to see the people brought to any kind of expression of joy or praise. Nothing happened. If you can imagine that building as a womb—there was no new life in it. There wasn’t life in the Word. There wasn’t life of people being born again. It wasn’t alive. People will often tell me that when they come for the first time or two to The Church On The Way, they feel something they can’t identify—it’s the presence of the love of God and the life of His Son. It’s what happens in the midst of the glory of the Lord being manifest among people. That’s not the product of human energy. It’s the product of the grace and power of God which responds to people who live according to His Kingdom ways.

What I did might seem a little strange, but I’ve learned that the strength of our church body life is not in trying to seem sophisticated but in simply teaching principles that the Lord invites us, as His children, to respond to.