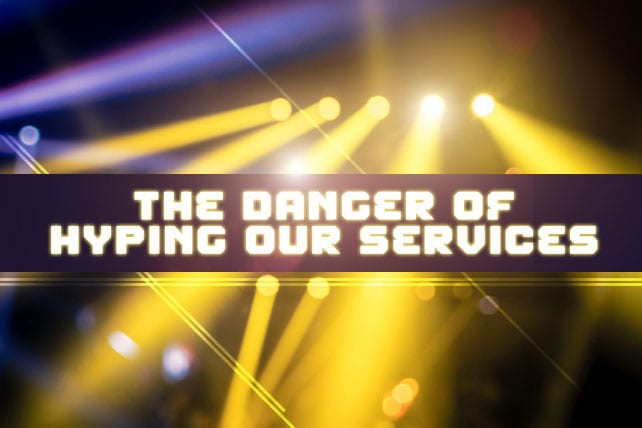 It was repeated several times in a church staff meeting, so it was nothing new this time. The pastor instructed us to essentially be his “amen corner” during the sermon and exuberant charismatics during the musical time of the service. Laugh, visibly take notes and clearly “lead” the crowd around you to respond to the platform. Of course, if the staff were lazy slobs and sleeping during the sermon and eye-rolling at the worship leader I might expect a reprimand. But, it was clear the goal was to create a more charismatic response through manipulation rather than instruction. Might the congregation say amen if the sermon was better delivered? Might the church sing louder if they were invited rather than coaxed into it?

In 2015, a movie called The Experimenter told the story of famous social psychologist Stanley Milgram. His experiments on obedience are legendary. These were the ones, if you recall, where a subject was a “teacher” who zapped the person in the other room with ever-increasing voltage. The test responses if in error or silence were punished. Most participants went all the way to the end, where the man in the other room went from pleading, screaming, to silent non-responsiveness. The moral choice to fulfill the experimenter’s wishes outweighed the well-being of the man behind the wall. Of course, it was an experiment and no one was hurt. But the observed behavior revealed to us a crack in human nature’s armor. This sort of crack is how Nazi concentration camp workers were exploited: “I was just following orders.”

Candidly, I would have preferred to ask that former pastor of mine to prepare better sermons rather than hype the current fare. Also, if our people were taught why we sing and the communally spiritual significance of it, they just might decide to join in. But, we are tempted to use authority and manipulation. What appears to be spontaneous then just is an unseemly ploy to give the appearance of a spiritually lively congregation. What could be modeled with authenticity is instead cheapened. A pastor who only gives this type of instruction is not really a teacher or a leader. I mean, is there room to have a brain and conversation? If even the fellow pastors were not valued for their minds, how could a congregation then be shaped to discern real from false? Everything is a façade in this world. And we wonder why kids leave the church. What we sell is hype. And, it can work…for a while ..and then it doesn’t and instead of trying to be “authentic” we work to hype what we can sell as authentic.

Dr. Milgram also did experiments where a set number of individuals looked a point in the sky. Nothing was there, but soon a growing crowd of onlookers presented themselves—a majority now looking at a blank point in the sky. If a church leader thinks his salesmanship is spiritual power, we then have a problem. I have heard many pastors brag about their communication skill. There is nothing wrong with being effective as a speaker. However, what are we selling these hyped experiences as? Do we want an army of obedient clones or a tribe of thinking servants?

This can also play out with the use of social media. Yes, marketing is all about creating buzz. However, marketing is a tool rather than the core of what ministry is. It is becoming common for churches to require their staff to post specific information and photos on their social media accounts. Why is this a problem? The church employee is not doing this because he or she is excited about the information, brought into the message by sitting at the table or coached to express shared ministry values. The brazen pragmatics simply see social media tools not as a dialogue but again as a monologue. Real, grass roots marketing is actually an egalitarian conversation, not a dictatorial broadcast.

Hype or Hope Is the Choice

We do have a choice. And, it may not help to build your next education wing. But, it may build people. I prefer to count what lasts when measuring ministry. This is why I am puzzled by churches that tell their story in terms of attendance and buildings. If we are called to love God and others, then that is what we should measure. We surely have many stories of God’s work in the lives of people. These overshadow the buildings we raise, the sermons we deliver or the organization we develop. Our stories are what is real—both the past and present workings of God. It is in these that hope for what is next makes sense.

Hype is an addiction. Don’t call it leadership. Or the movement of the Spirit. We must be careful to not over-promise on something that is an under-delivered mirage. This is especially true in a day and age when people long for the real thing. Even the church with its messy people is a beautiful bride. This mystery is our strength. Let’s not hide this fact. And, let’s welcome people to learn to be discerners of truth and lovers of people. Hype seems to be contrary to both truth and love. And, what hope is there in something manufactured by us, anyway?