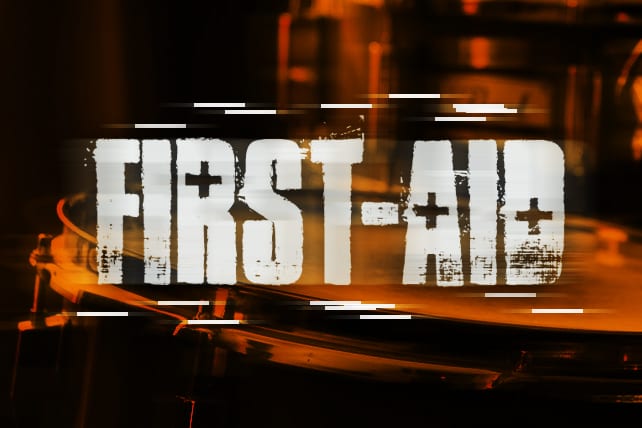 The kick drum beater just tore clear through the drum head and there’s 20 minutes to replace it.

The drummer, Anthony, has the skills to do it. Not a problem. Wait, what do you mean the spare head doesn’t fit? Bring me the holy gaff tape!

Did it sound great? No, but it sounded good enough and got us through the remaining five songs.

These things happen in live audio but their likelihood of occurring can be minimized. To keep your drums sounding great, follow these four steps.

Before getting into specifics, let’s cover terminology. There are two types of drum heads; batter and resonant. The batter heads are what’s hit. The heads on the opposing side are resonant heads, often seen on kick drums.

The heads (skins) come in various styles, the most common being single ply. Single sheet heads produce more overtones and brightness though lesser sustain compared to other styles. They’re the most sensitive and therefore the least durable. Single ply are available in various thicknesses.

Double ply heads have a deeper tone with fewer overtones, a shorter sustain and a more defined attack than single plys. They consist of two layers, are available in different thicknesses for distinct tones, and are more durable than singles.

Heads are also available as coated, pre-muffled and as specialty heads. Coated heads have a warmer tone due to the thicker density of the head. Pre-muffled heads decrease overtones and can be useful for kick drums. Specialty heads are designed for unique tonal properties.

Resonant heads are as thin as single plys, 7-10 mil, but can be as thin as 2-5 mil for snare heads. The thicker heads offer more sustain and deeper tone than thinner heads with less sustain and brighter tone.

Drum heads are like guitar strings; over time they wear out, sound worse and eventually break. The lifespan is determined primarily by usage; how hard and how often they’re hit. Over time, they’ll lose their brightness and this is where things become hard to judge.

Some drummers replace heads every six months while others go every three years and others go much longer. Judge based on the brightness and what works in your room. If the tone is great but the drum heads are a few years old, keep using them. Also, if the drums are too bright in your room, look to switching to coated heads or double ply.

Know that heads wear out at different rates so you’ll likely replace a snare drum head several times before replacing a small tom head. Watch for deep pitting on the kick drum from the beater. Finally, keep spares on hand for obvious reasons.

Drums go out of tune for a number of reasons including age and temperature changes. It’s best to keep drums in a fixed temperature and humidity environment. When that doesn’t happen, such as when the heating or AC is turned on only for the weekend, the wooden shell will expand or contract causing detuning of the drums.

I’ve seen drums detune during seasons of heavy Midwest humidity. In some cases, after the room AC is on long enough, the drums will go back in tune—maybe not perfectly in tune, but close.

A drum sounds best (and performs best) when the head has even tension across the head. Therefore, have a skilled tuner tune your drums or do it yourself using something like the Overtone Labs Tune-Bot Digital Drum Tuner. You might have a drummer that’s great at drum tuning.

Place a kick drum patch where the beater contacts the head. The patch will absorb the impact of the beater without negatively affecting the sound. The patches can also increase clarity and attack.

OK, this isn’t exactly drum head care but it’s an important step to ensure the drums sound good at the source.

I take this step whenever I’m mixing. With a nine-microphone setup including a Yamaha SubKick microphone, it’s important that each one is positioned correctly. Overheads should be positioned at an equal height, snare and tom microphones should be an inch from the drum head, angled slightly. It’s also important to consider the location on the perimeter of the drum so cymbals are in the null area of the mic’s polar pattern.

Also, have a fixed microphone placement that’s the same for every weekend. You might like overheads at a certain height and someone else likes them closer. Establish a standard setup. This helps toward creating a general overall mix that’s consistent from week to week.

Don’t find yourself in a situation like I did. Stay on top of drum kit maintenance by running through the above steps every few months. Depending on your environment, tuning might need to occur on a regular basis.

Oh, a funny little note to add about my busted kick drum. Anthony replaced the tom heads a week prior but thought the kick drum head was OK. So it goes.

Check out this article on mixing the snare drum—it’s got everything from EQ work to microphone selection.