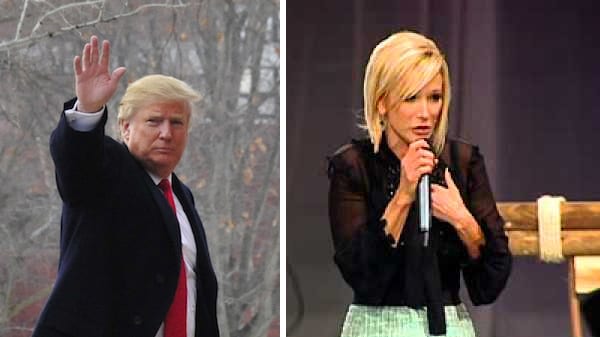 Donald Trump selected televangelist Paula White to lead the prayer at his inauguration on January 20, 2017. Since the announcement, White received an overwhelming amount of criticism based on her personal life and doctrine, and she’s remained quiet until now.

The Washington Post published two opinion pieces on White and her role in the inauguration proceedings. One article calls White a “prosperity preacher” and the other deals with her theological penchant for a blend of Pentecostalism and Word of Faith teachings.

Other evangelicals like Eric Erickson have voiced their concerns over Trump’s decision to have White at the inauguration due to her unorthodox beliefs. Erickson goes so far as to say he would rather have a Hindu lead a prayer in White’s place.

White has been called a heretic, apostate, adulterer, charlatan and even an addict.

Speaking with Faithwire, White says she chose to address the accusations because she feels they are a distraction from Trump’s inauguration. White calls statements that she once filed for bankruptcy, denies the Trinity and that she only preaches on prosperity “patently false.”

“First of all, I believe and have always believed in the exclusivity and divinity of Jesus Christ, his saving grace and substitutionary atonement made available to all by his death on the cross,” White said.

White says she also rejects “any theology that doesn’t affirm or acknowledge the entirety of scriptural teaching about God’s presence and blessing in suffering as much as in times of prosperity.”

When it comes to her personal life, White admits her decisions haven’t been perfect, but she believes the accusations about her don’t reflect reality.