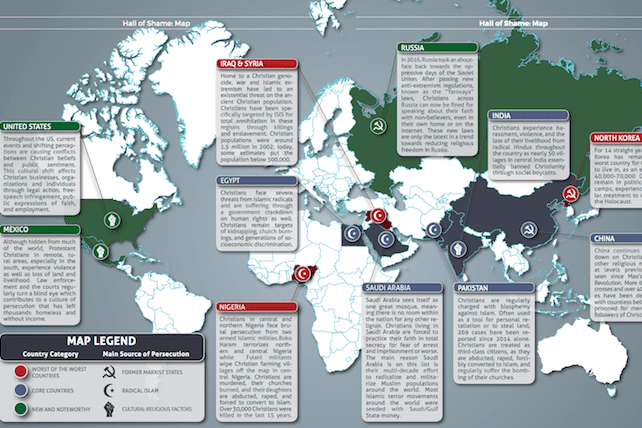 Every year, the watchdog group International Christian Concern (ICC) assembles a “Hall of Shame” report to give updates on the state of persecuted Christians around the world. The 2016 report lists the United States as a “new and noteworthy” country where conditions “indicate declining religious freedom and are cause for alarm.”

The report states that while the situation in the U.S. isn’t nearly as dangerous or dire as it is in other nations like North Korea, “Christians in the U.S. are facing constant attacks in the media, where they are portrayed as bigoted, racist, sexist and closeminded.”

The report highlights certain situations where Christians have had to pay fines or suffer the loss of employment because of their desire to operate their businesses or their personal affairs as they believe the Bible instructs. The report calls the termination of Dr. Eric Walsh from the Georgia Department of Public Health (DPH) a “major story.” Walsh was a leading public health expert in the DPH who also serves as a lay minister in his time outside the office. Walsh was terminated after the DPH investigated his sermons posted on YouTube. The official reason for his termination was cited as undisclosed income from prior employment, but ICC seems to think this is a thinly veiled excuse to discriminate against a Christian.

Another country on the “new and noteworthy” list is Russia. Of note are the newly-instated Yarovaya laws which were passed in 2016. These laws, cited as defense against terrorism efforts, severely inhibit missionaries from evangelizing outside a church—particularly the state-approved Russian Orthodox Church. David Ossewaarde, an American missionary to Russia, was arrested earlier this year in observance of these laws for holding a worship service in his house.

The other “new and noteworthy” country cited is Mexico, which is home to a deeply religious population. However, evangelical Christians are the minority, and their desire to abstain from traditional cultural celebrations they see as pagan is often not respected. The report claims “heavy fines, imprisonment, beatings, eviction from their communities, or in the most extreme cases, rape or murder” face evangelical Christians in some parts of Mexico.

As far as the “worst of the worst” countries to be a Christian, the report cites Iraq and Syria, Nigeria, and North Korea. Other countries that made the list of “core countries” where persecution rates are high include India, Pakistan, China, Saudi Arabia and Egypt.

ICC offers this report as part of its mission to “relieve the suffering of the persecuted church” via advocacy, awareness and assistance. The report serves to raise awareness to the state of brothers and sisters in Christ who are suffering.