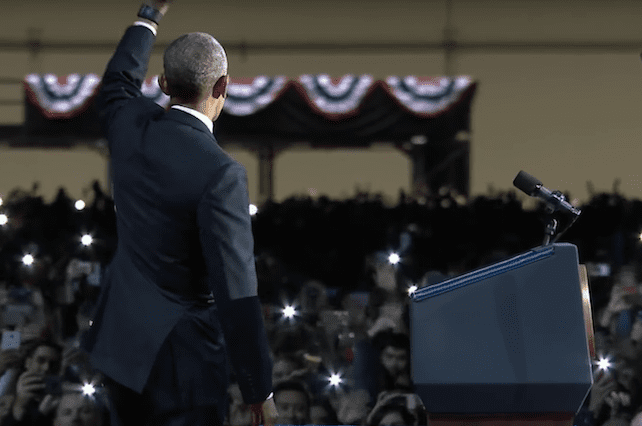 Whether you are a supporter of President Obama or not, there is one thing even his most vocal enemies acknowledge: He is an excellent communicator and an exemplar of tact. After eight tumultuous years in office, the President gave his farewell speech in Chicago last night. His speech can teach us all something about leaving well—whether we voted for him or not.

We will all face situations where it’s time to leave. When you’re in ministry, the ties you bind with people run particularly deep, and it’s hard to say goodbye. If and when you face a situation that feels as hard as a President coming to the end of his term, consider the example President Obama just offered.

Here are four leadership-worthy principles on leaving well we took away from the President’s speech:

Acknowledge others’ contributions to the work you accomplished

The President gave a brief recap of the things his administration was able to accomplish in eight years. But instead of using it as an opportunity to pat himself on the back, he brought attention to the American people and said, “You were the change. You answered people’s hopes, and because of you, by almost every measure, America is a better, stronger place than it was when we started.” So much of ministry is about teamwork. We are the body of Christ, and a body can’t operate fully without the hard work of all the members. Take the time to acknowledge what others have done to help you accomplish your goals.

Show respect for and trust in the new leader replacing you

When President Obama referenced the transfer of power that is to take place on January 20, the crowd jeered “No!” Instead of allowing it to continue, though, President Obama quieted them and emphasized the need for Americans to support their new President. He explained that even though we can disagree with one another, the founding fathers of America knew that solidarity had to be the bedrock of democracy. The President appealed for unity by saying that “for all our outward differences, we are all in this together; that we rise or fall as one.” How can you show honor and respect for the person replacing you? What can you do to facilitate a smooth transition for the next person?

I’m still going to be here, fighting the good fight with you

The President made his conviction to keep fighting for democracy clear. Even after stepping down from office, President Obama says, “I won’t stop. In fact, I will be right there with you, as a citizen, for all my remaining days.” Just as President Obama is relinquishing his title of President, he will remain an American. Even if you are leaving a position in ministry, you are still a citizen of God’s kingdom. Regardless of where you work next, you will always be a citizen of God’s kingdom. Your work doesn’t stop just because you don’t hold a particular title anymore.

There is always hope

We as Christians should especially know this fact to be true. The President highlighted hope when he said, almost in opposition of how people feel coming into this new presidency, that he feels “even more optimistic about this country than [he] was when we started.” The President also gave a shout out to the younger generation (who by and large supported him both times he was elected) by calling them “unselfish, altruistic, creative, patriotic.” He commended them for their ability to bring about change and the fact that “you are willing to carry this hard work of democracy forward.” Because of these qualities he sees in the younger generation, the President said he believes “the future is in good hands.” As you leave your position of ministry, what admirable qualities can you point out in the team that is staying? Help them to succeed by calling out the characteristics you believe will allow for their success.