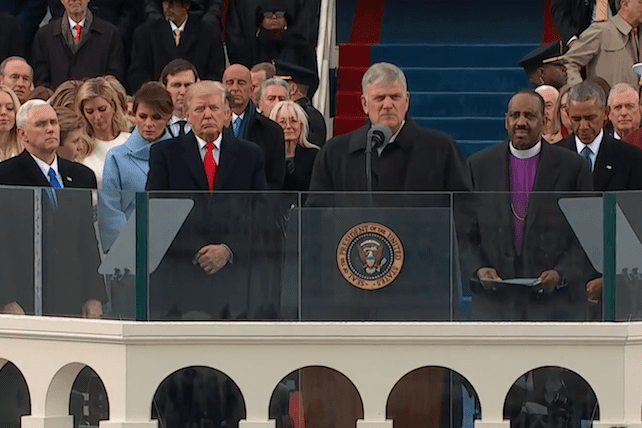 Today America swore in its 45th president: Donald Trump. After a whirlwind and highly controversial campaign, Trump set a record during the inauguration ceremony for the number of prayers included in the ceremony.

Trump used two Bibles as he took the oath of office: One given to him by his mother and another that was used by Abraham Lincoln.

It was a diverse lineup of clergy that participated in the ceremony—from a televangelist to a Jewish rabbi to the leader of a major evangelical organization. Each leader offered an invocation or a benediction for Trump’s presidency. Here are some of the highlights:

Cardinal Dolan took a cue from Solomon, who asked for wisdom when he was preparing to lead God’s people. Dolan asked, “Give us wisdom, for we are your servants…lacking of comprehension of judgment and laws.” He implored God, who “alone knows what wisdom is,” to send wisdom forth “from your holy heavens… That she may be with us and work with us.”

Rodriguez’s prayer was an adaption of the beatitudes, running through all the people Jesus said are blessed: the poor, humble, those who hunger and thirst for justice, the merciful, the pure in heart, those who work for peace, and those who are persecuted for doing right. He also mentioned Jesus’ words about the lamp on a stand—not to be hidden under a basket—but shining forth for all to see.

White started by thanking God for the United States. She reminded everyone we have a “rich history of faith and fortitude.” Every good gift is from God, and the U.S. is God’s gift. She asked God to bestow the wisdom necessary to lead this great nation. She mentioned Proverbs 21:1 and asked God to “reveal unto our President the ability to know your will.” She also asked God to bind and heal our wounds and divisions and to let the U.S. be a beacon of hope to all people.

Hier started by quoting from Psalm 15, which starts out, “Who shall dwell on your holy hill?” He asked God to “dispense justice for the needy and the orphan” and said a “nation’s wealth is measured by our values and not our vaults.” He also asked God to bless the nations and concluded by referencing Psalm 137, which says, “By the waters of Babylon, there we sat down and wept, when we remembered Zion… If I forget you, O Jerusalem, may my right hand forget its skill!” (Psalm 137:1, 5).

Graham started his prayer by pointing out that it had started to rain, and in the Bible rain is the sign of God’s blessing. He prayed that God would bless Trump and guide him as he leads the nation. Graham then read from 1 Timothy 2, which specifically mentions praying for those in leadership: “I urge that supplications, prayers, intercessions and thanksgivings be made for all people, for kings and all who are in high positions…”

Jackson started by saying, “Let us not take for granted the air we breathe or the land you’ve given us.” We’re not enemies, but allies. Let us be healed by the power of your love. He then mentioned three important figures of the Bible: Solomon who was able to bring about peace among different people; Joseph who dreamed for better; and Christ, who accepted us all. He concluded his prayer with a benediction adapted from Numbers 6:24-26: “May the Lord bless America, may the Lord be gracious unto us, and give us peace.”

Trump himself made mention of God a couple times in his speech. He quoted Psalm 133:1: “How good and pleasant it is when God’s people live together in unity.” He also mentioned that America will be protected by our military, but most of all, “We will be protected by God.”