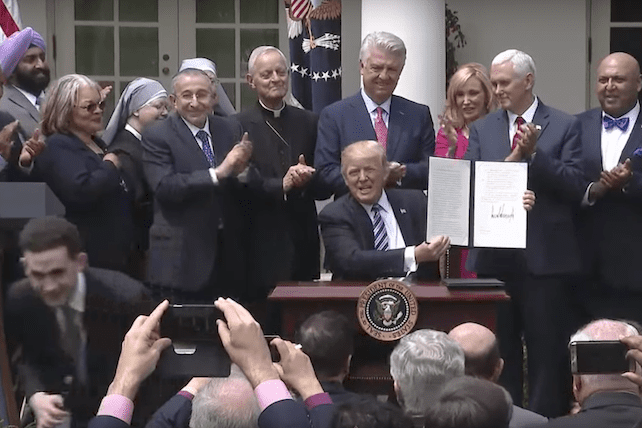 Most of President Trump’s evangelical advisory board flew into Washington D.C. last night, May 3, 2017, for a special dinner with the president. On the eve of the National Day of Prayer, the group celebrated what Trump has accomplished for conservative evangelicals in his short time in office.

Today, May 4, 2017, Trump adds another achievement to his list: an executive order that curtails the Johnson Amendment and is designed to protect religious freedom.

In the Rose Garden of the White House, with religious leaders such as Rabbi Heir, Pastor Paula White, Pastor Jack Graham and Cardinal Wuerl with him on the platform, Trump ceremoniously signed the order.

Before the signing, Mike Pence offered a few words about the significance of the National Day of Prayer and the fact that it was being celebrated in the Rose Garden of the White House. Every president since its inception has observed the National Day of Prayer, however not every president has done so in the Rose Garden. This comment was a veiled jab at Obama, who did not host any public events at the White House related to the National Day of Prayer during his time in office. This sentiment was echoed in Trump’s speech, who said to the group of religious leaders gathered: “It was looking like you’d never get here, folks, but you got here.” Pence concluded his speech by pointing to the current president’s intention to “reaffirm the vital role that institutions and people of faith play in our national life.”

Next Trump took the mic and gave a brief speech that highlighted the significance of his winning the election and thus his ability to help protect the religious freedoms of America. “We’re a nation of believers. Faith is deeply embedded into the history of our country,” Trump said. He pointed to the fact that he had three leaders from three very different faith traditions on the platform with him. “Not only are we a nation of faith; we are a nation of tolerance,” the president said. Further, we are “blessed to live in a nation that honors the freedom of worship.” In light of this freedom, the president expressed his intention to “not allow people of faith to be bullied, targeted or silenced anymore.”

Trump took the opportunity to announce that his first foreign trip will take him to Saudi Arabia, Israel and then Rome. This is a significant trip where he will be talking with other world leaders who are concerned about fighting terrorism.

Turning his attention to the executive order he was about to sign, Trump explained that the Johnson Amendment, which was established in 1954, held the threat of “crippling financial punishment” that is “very, very unfair” over religious leaders’ heads. “No one should be censoring sermons or targeting pastors,” Trump said. He referenced the African American church’s involvement in the civil rights movement as an example of how the church has affected social change in our nation. America has a “noble tradition of change from the church and progress from the pew,” Trump said.

In an apparently impromptu move, Trump called a couple of the Little Sisters of the Poor onto the platform and congratulated their recent victory in a lawsuit concerning their organization’s right to deny Obamacare-mandated contraceptive coverage to their employees.

Following his speech, Trump moved over to a desk on the platform to sign the executive order.

In February, a leaked copy of the proposed executive order, titled “Establishing a Government-Wide Initiative to Respect Religious Freedom,” made its way to The Nation. The draft has been under scrutiny since the leak, with critics calling it “sweeping” and potentially in violation of the First Amendment.

Essentially, the order directs the IRS to “exercise maximum enforcement discretion to alleviate the burden of the Johnson Amendment,” which prohibits organizations labeled 501(c)3 non-profits from doing things like endorsing or opposing political candidates.

The final draft of the order is called “Promoting Free Speech and Religious Liberty” and is a little less “sweeping” than the original draft.

The signing of this executive order represents the fulfillment of a promise Trump made during his National Prayer Breakfast speech on February 2, 2017. In this speech, Trump said, “I will get rid of and totally destroy the Johnson amendment and allow our representatives of faith to speak freely and without fear of retribution. I will do that.”