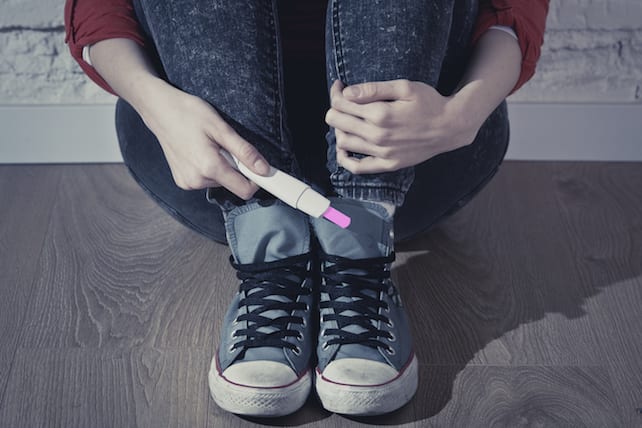 Maddi Runkles is an 18-year-old high school senior who is about to graduate from her private Christian school with a shining record—on all but one point. Runkles is pregnant and has been forbidden from participating in her school’s graduation ceremony.

Runkles says she is being treated unfairly compared to other students who are in violation of the code of conduct at Heritage Academy in Hagerstown, Maryland. “They’re seeing my actions as worse because there’s a visible consequence to it,” Runkles said. “They can see the result of my sin, but I don’t think that means I need to be treated worse just because you can see what I’ve done.”

Speaking to the Blaze, Runkles says she found support from her evangelical Christian parents and church earlier this year when she found out she was pregnant. Her school, however, had a different reaction.

Runkles was suspended from school for two days while the school board discussed whether she should stay at home for the remainder of the school year. At the time, Runkles’ father, Scott, was the head of the board; however, he recused himself when it came to his daughter’s case. According to the New York Times, he has since quit the board altogether after witnessing how his daughter was treated.

Runkles’ story likely wouldn’t have made it into the New York Times if she hadn’t gotten the ear of Students for Life, a pro-life group that agrees with Runkles that the school’s decision is unjust. Kristen Hawkins, president of Students for Life, says the decision is not graceful or loving. Further, Hawkins believes Runkles should be applauded for her own decision to keep the baby: “She made the courageous decision to choose life, and she definitely should not be shamed.”

Hawkins appealed to Heritage Academy administrator David Hobbs on Runkles’ behalf. Hobbs and the school remain unmoved as of yet. In a written statement sent to the New York Times, Hobbs writes of Runkles’ pregnancy as “an internal issue about which much prayer and discussion has taken place.”

Here is the crux of the issue with Runkles and the way her school has treated her situation: It’s not very pro-life of a Christian school to marginalize her for deciding to keep her baby. Where is the support and grace for the person who knows they have done something wrong but has decided to do what’s right moving forward?

“Some pro-life people are against the killing of unborn babies, but they won’t speak out in support of the girl who chooses to keep her baby,” Runkles told the New York Times. “Honestly, that makes me feel like maybe the abortion would have been better. Then they would have just forgiven me, rather than deal with this visible consequence.”

One of the critiques of the pro-life movement has been the expression of concern for the baby in the womb while the mother appears to be villainized for her poor choices. Even if the mother is not villainized, there is still a lack of care for single mothers or birth mothers who choose life and their children.

In other words, sometimes it’s one thing to say you are pro-life and another thing to act as if you are pro-life. Isn’t this what Scripture (James 1:27) tells us to focus on in our religious expression: the caring of widows (i.e.: single mothers) and orphans?