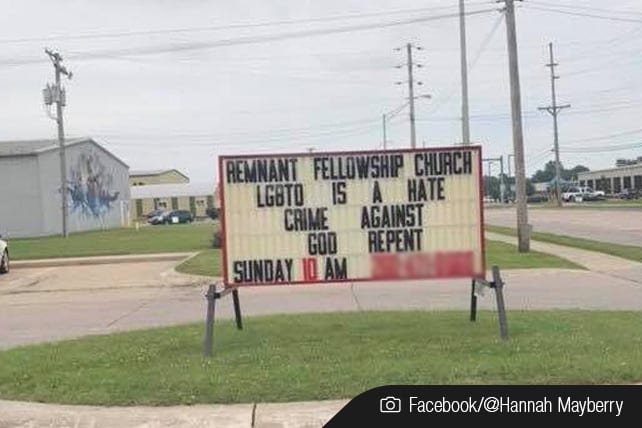 News reports, based on information supplied by unnamed church members, say the Remnant Fellowship Church has been evicted from its building because of the sign that read, “LGBTQ is a hate crime against God. Repent.” The church has also been protested and shut down their Facebook feed after one Facebook user said she rearranged the letters to say, “Stay open minded,” and posted a photo of her handiwork, according to WANE.

Newsweek reported that the landlord of the building, local members of the LGBTQ community and surrounding institutions were unavailable for comment by deadline.

The congregation is reportedly looking for another building to hols worship services.

It’s not the first church sign to get negative reaction, but it is the latest.

The sign outside Remnant Fellowship Church in Auburn, Indiana, reads, “LGBTQ is a hate crime against God. Repent.”

The sign generated comments on social and local media from passersby who were offended by it and those who defended it.

A local TV station, NewsChannel 15, did a story on the sign after getting calls. Tiffany Johnston told the station she doesn’t like the sign’s message. She said she has friends who are gay and bisexual and she doesn’t want her kids to grow up in a hateful world.

“It makes me upset. I’m outraged and disgusted by it,” said Johnston. “It’s judging people. I felt judged and I’m not even in that community. But I have family members that are. So it really, really upset me. I don’t think it should be up here. I think it should be taken down because all it’s doing is spreading hate.”

Robert Sturges, an elder at the church, said Johnston and others who share her opinion have it wrong. He said the sign simply conveys what the Bible says about homosexuality to the culture at large.

“We’re trying to reach a certain group of people,” Sturges said. “They’re being told in our culture that homosexuality, transvestites, lesbianism and sexual immorality is OK. But the Bible clearly says that those who practice these things will not inherit the Kingdom of God. In fact, it warns them that the wrath of God will abide upon them. And in the judgment, they will be lost and they will be sent to hell forever. We believe that. That’s our faith.”

Sturges said he wants to remind people who talk about tolerance that his church believes the Bible and they are not afraid to stand firm in their beliefs.

“We do love them,” Sturges said. “But we want to warn them that they are headed toward a cliff, and if they keep going that way, they’ll be destroyed. And that is what the sign is about.”

Last year, Family Worship Church of God in Clinton Township, Michigan, got a similar reaction to their sign that read, “We love the homosexual enough to tell them they’re wrong.”

How to reach the homosexual community is an issue that the evangelical church continues to struggle with. Pastor and theologian Kevin DeYoung has written that it’s important to preach the same gospel to gays as the rest of the congregation.

That message, DeYoung wrote, is we are all created in God’s image and we are born into this world predisposed to sin. “The Bible says we are children of wrath—sons of disobedience—and that our inclination is always toward evil all the time,” said DeYoung.

The issue of hospitality and being welcoming is one of the sticking points in the debate over church signs. One of the people upset by the Michigan church sign said he didn’t consider the message “very welcoming to his community.”

The issue is also one of the topics of the controversial Revoice conference taking place in late July in St. Louis. The conference’s stated mission is “to encourage, support and empower gay, lesbian and other same-sex-attracted Christians so they can experience the life-giving character of the historic, Christian sexual ethic.”

Conference founder Nate Collins said one of his goals is to get respect and repentance from the evangelical church for its posture toward the mainstream LGBT community. Church signs like the ones above could likely be two of his examples.

But critics of the conference wonder if a church violates the desired goal of being welcoming by holding to biblical truth about sexuality, gender identity, sin and repentance.

Church signs aside, one of the Revoice critics, Denny Burk, adds that all church leaders should ask if their church and home have arms wide open to come alongside homosexuals, to receive them and to strengthen them.