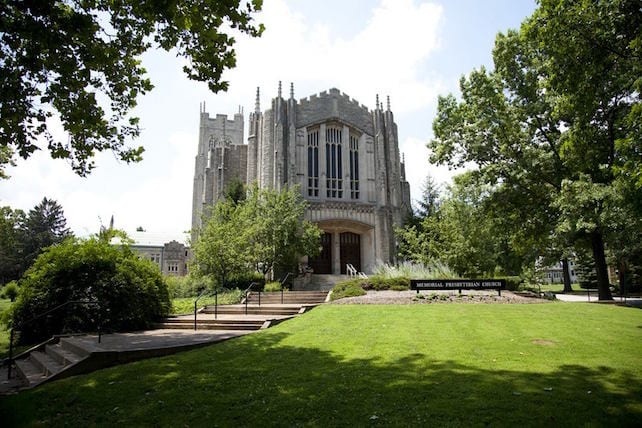 A conference in St. Louis next month is generating a lot of conversation and controversy. It’s called “Revoice” and its mission is “to encourage, support and empower gay, lesbian and other same-sex-attracted Christians so they can experience the life-giving character of the historic, Christian sexual ethic.”

Greg Johnson is the lead pastor of Memorial PCA, the church that’s hosting the conference. He said the idea for the conference name comes from music.

“The idea behind “revoicing” a piano is that you keep the piano but tune it to bring out the beauty of the instrument’s sound. Often, our teaching about homosexuality is simply that gay sex is wrong. And that much is true. That’s one note, one indispensable key on the piano. But what of the teenager in our churches who only hears that one note over and over again whenever gay people are discussed—a teenager crushed by the shame of a sexual orientation he has acknowledged to no one? Is the Bible’s message to him only negative? A well-voiced piano can make a much more complex and beautiful sound. Yes, that message still includes a call to self-sacrificial discipleship. (That’s the same for all of us.) But the gospel offers the believer with same-sex struggle a positive vision of flourishing in Christ as a part of his body the church.”

Nate Collins is the founder of Revoice and one of the speakers at the event. He also describes himself as a “Christian gender and sexual minority.”  He says this group needs some kind of visible, public support from the evangelical Church.

“We want Revoice to be a community where this group of people can feel safe to come as they are and to be known by other Christians who want to love and encourage gender and sexual minorities. At the same time, we’re aware that the conference itself will attract a wide variety of people who are outside that category who also want to encourage and support Christian gender and sexual minorities.”

Collins says he represents a new generation of Christian gender and sexual minorities who are resolutely following Christ while also trying to discover creative ways to integrate their faith, gender and sexual identities.

He also wants respect and repentance from the evangelical church for its posture toward the mainstream LGBT community.

In addition to keynote speakers Wesley Hill, Eve Tushnet and Nate Collins, there are also workshops. They will address issues such as: Does the Bible really prohibit all homosexual behaviors? What do I do if I develop a same-sex crush on my brother or sister in Jesus? What particular challenges and opportunities have others in ‘mixed-orientation’ marriages faced?

Is there anything admirable that we can acknowledge within the literature, art and struggles of “queer” culture? From a biblical perspective, what is redeemable—what evidence of the imago dei is present within the literature of that movement? What longings does one find in “queer” art and film that point to a bigger need for God?

The conference and its goals have drawn a host of criticism. Some say the term “sexual minority” is grossly out of order and that those who struggle with sin should not be encouraged to identify themselves by their sin. The term makes disordered sexual desires essential to personhood and the group has adopted an unbiblical view of human identity—one that treats same-sex attraction as a matter of moral indifference and homosexual orientation as an identity to be embraced.

A key point of the effort is to make churches welcoming to homosexuals, but some wonder if a church violates that objective by holding to biblical truth about sexuality, gender identity, sin and repentance.

Pastor Johnson says he’s been asked why an evangelical church would host such a controversial gathering.

“Because there are a lot of gay men and women becoming Christians—or who grew up in Christian homes—and found themselves attracted to the same sex. They aren’t always sure what that means for their sexuality or for their church life. They want to obey God, but they often feel like they don’t fit in the body of Christ. The goal of the conference is to help those who believe in the historic, biblical sexual ethic figure out how to thrive within churches that share those biblical commitments. These are sisters and brothers who are paying a lot more than a tithe to follow Jesus.”

He also says the conference will give pastors and other church leaders ideas on helping sexual minorities connect, feel loved and grow as disciples of Jesus while offering guidelines for pastoral care.

Organizers are hoping for 425 attendees at the July 26-28 gathering. They are also making plans for next year’s conference.