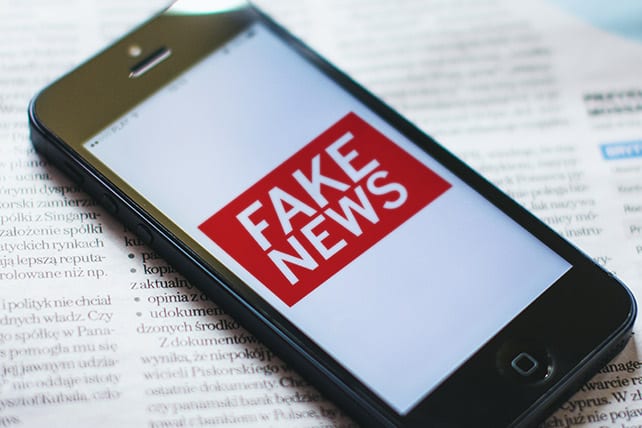 A new study on fake news and its appeal on social media reveals an old teaching from the Bible—humanity is sinful by nature and prone to evil.

The first-of-its-kind study from researchers at MIT looked specifically at Twitter.

“It seems to be pretty clear [from our study] that false information outperforms true information,” said Soroush Vosoughi, a data scientist at MIT who has studied fake news since 2013 and who led this study. “It might have something to do with human nature.”

The researchers found a false story is much more likely to go viral as it reaches 1,500 people six times quicker, on average, than a true story does. And while false stories outperform the truth on every subject, fake news about politics regularly does best.

Extrapolating those numbers as a percentage, falsehoods were 70 percent more likely to get retweeted than accurate news.

“In August 2015, a rumor circulated on social media that Donald Trump had let a sick child use his plane to get urgent medical care. Snopes confirmed almost all of the tale as true. But according to the team’s estimates, only about 1,300 people shared or retweeted the story.

“In February 2016, a rumor developed that Trump’s elderly cousin had recently died and that he had opposed the magnate’s presidential bid in his obituary. “As a proud bearer of the Trump name, I implore you all, please don’t let that walking mucus bag become president,” the obituary reportedly said. But Snopes could not find evidence of the cousin, or his obituary, and rejected the story as false.

“Nonetheless, roughly 38,000 Twitter users shared the story. And it put together a retweet chain three times as long as the sick-child story managed.

“A false story alleging the boxer Floyd Mayweather had worn a Muslim head scarf to a Trump rally also reached an audience more than 10 times the size of the sick-child story.”

Here’s a way to test the study for yourself. The next time you see a correction on Twitter when someone tweets a story that ends up being false, see how many tweets the correction gets compared the original post. It’s almost always a mere fraction.

The Allure of Fake News

Why are we so engrossed by fake news? Those from a biblical worldview say the reason lies in our fallen nature.

“Social media enlivens our carnal nature,” Kim Cash Tate wrote in an article for Desiring God. “We enjoy quick satisfaction. Emotion wants an outlet. Complaints must be heard. Anger needs to be expressed. And contrary views must be vigorously opposed, because that’s what the flesh enjoys as well—superiority. It will mow down another’s views—succinctly if on Twitter—while elevating its own, earning a satisfying flurry of shares and retweets. We all know how much the flesh loves validation.”