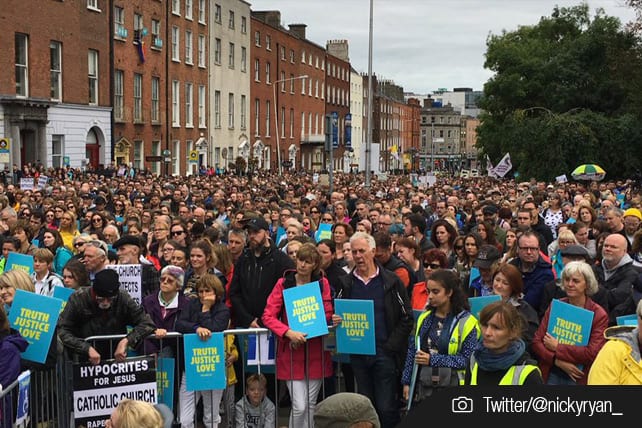 In a new report from BishopAccountability—a nonprofit that tracks abuse allegations within the Catholic Church—the out-of-court settlements and civil suit cases have cost the church a staggering $3.8 billion.

The report states that the organization has documented “settlements involving 5,679 persons who allege sexual abuse by Catholic clergy,” which have been paid through 2009.

Some settlements opt not to state the number of clergy members that were accused, making it difficult to discern just how many clergymen were involved, according to CNN.

The report states that the victims they’ve highlighted “are only one-third of the 15,235 allegations that the bishops say they have received through 2009, and they are only 5 percent of the 100,000 U.S. victims that Fr. Andrew Greeley estimated in a 1993 study.”

The largest single settlement payment that was made occurred in 2007 in Los Angeles, California. According to the report, 221 priests, brothers, lay teachers and other church employees were named by 508 victims, and a grand total of $660,000 was paid to those victims in the settlement.

The reported settlements not only include monetary compensation but also feature non-monetary provisions such as establishing a toll-free victim hotline and victim assistance programs.

BishopAccountability spokesman Terry McKiernan told CNN the number of associated clergy is difficult to calculate because some settlement announcements omit the number of predator priests.

The monies have not gone solely to survivors, McKiernan said. Attorneys get a cut, too. And not all the money comes out of the coffers of the Catholic Church, because the church maintains insurance policies that cover a portion of the settlement payments.

The report follows a Pennsylvania grand jury finding that more than 300 predator priests abused more than 1,000 children in six Catholic diocese in Pennsylvania from the 1940s through the early 2000s.

The report added that the “real number” of abused children might never be known since some secret church records were lost, and victims were afraid to come forward.

The grand jury described the church’s methods as “a playbook for concealing the truth” after FBI agents identified a series of practices they found in diocese files.

A number of other states have since opened investigations into claims of abuse perpetrated by clergy in the Catholic Church.

The scandal has reached all the way to Pope Francis.

Earlier this week, Archbishop Carlo Maria Vigano dropped on bombshell on the church saying the Pope has been covering up sexual abuse in the Catholic Church for years and must resign.

The Archbishop served as the papal nuncio (that is, Vatican ambassador) to the United States from 2011-2016, and claims he personally told Pope Francis about sexual sins by high ranking priests in 2013.