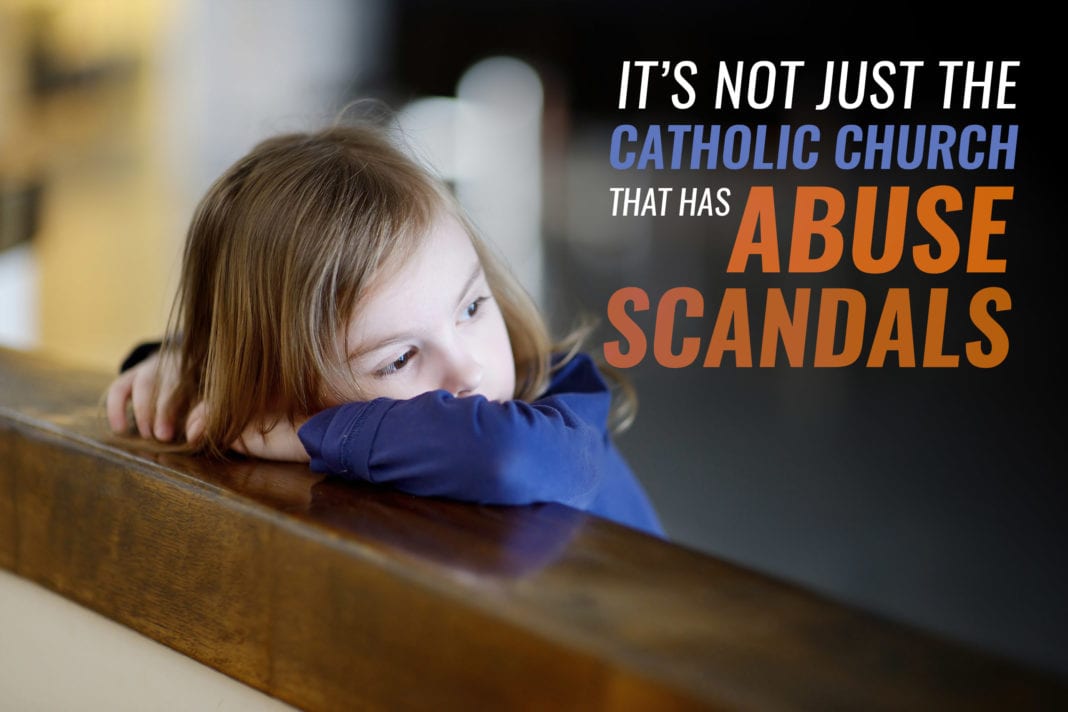 Billy Graham’s grandson, Basyle “Boz” Tchividjian recently shared his thoughts on the overlooked problem of sexual abuse in the Protestant church. According to Tchividjian, whose organization investigates abuse in conspicuous Christian organizations, the problem of sexual abuse is as pronounced in the Protestant church as it is in the Catholic Church—if not more so.

“It’s common to see a desire to protect the institution at the expense of the individual,” Tchividjian tells Vice.

Experience as a prosecutor opened Tchividjian’s eyes to the problems with how faith-communities react to a person who discloses abuse. Now, his organization, GRACE (Godly Response to Abuse in the Christian Environment), investigates high-profile Christian institutions such as Bob Jones University and New Tribes Mission.

As we all could guess, the problem of abuse is not exclusive to the Catholic church, and that’s not really where the focus of the interview lies. But, Tchvidijian gives the numbers on abuse cases reported to insurance providers for Protestant churches (260 a year) versus Catholic churches (228 a year). Although the Catholic church has been in the news more for this offense, Tchividjian says he is concerned that the church he grew up in—the Protestant evangelical church—sometimes glosses over these facts. He acknowledges there are more Protestants than Catholics in the United States, but explains “for me, it’s important to share that statistic when speaking with Protestant audiences so that they stop pointing their fingers at the Catholic Church and engage more with their own church.”

In the interview, Tchividjian highlights some things that make the church a particularly easy target for would-be abusers and an unlikely partner to those who have abused people and wish to keep their secrets hidden.

The Things We Do Wrong

Tchvidjian spoke of victim blaming when abuse is disclosed. This might come in the form of telling the victim the abuse was provoked by dress, behavior, proximity, etc. Additionally, forcing the victim to forgive the offender does further damage, heaping shame on the victim and delaying healing. Tchvidjian explains shame is a particularly big problem for male survivors. Male survivors typically don’t “want anyone in the church to know because they thought that they would be labeled a future offender and everyone would keep their kids away, or they would be accused of being gay.”

Some churches cultivate a culture where women especially are taught very little about sex—the main lesson being to avoid it all costs and in any minute form until one’s wedding night. The problem with this is that when women are taught this way, and men are placed in positions of almost unquestionable authority, the situation is ripe for abuse. Tchvidjian explains that oftentimes “the girl doesn’t realize what she’s experiencing is abuse until much later, because she’s ignorant of sex.”

Defending the Perpetrator instead of the Victim

Tchividjian recalls the sexual abuse cases he managed as a prosecutor where, more often than not, the church would send someone to defend the perpetrator and not the victim. The practice confounded Tchividjian, who thinks of Jesus’s words when he said it would be better for a person to have a large stone tied around their neck and be thrown into the sea than for them to harm a child.

While abuse is by no means exclusive to the church, we have to understand it can be particularly devastating when it happens inside the very institution that was meant to teach people about Christ and speak up for the marginalized, as Jesus did. Victims abused in this context have a hard time trusting God or Scripture, especially if their abuse included references to those things.

Tchvidijian is the first to admit his work helping sexual abuse victims has given him a very “low” view of the church. At the same time, though “It has also given me a much higher view of Jesus.” It is faith in Jesus, the greatest defender of children in Tchvidijian’s view, that compels him to continue in his very difficult work.