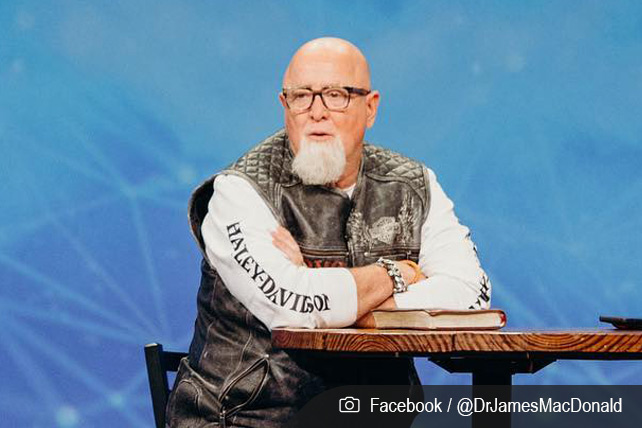 Saying criticism of him and his church crossed the line into defamation, James MacDonald and Harvest Bible Chapel are suing two former members and a former Moody Radio host. MacDonald, founder and senior pastor of the Chicago-area megachurch, has been a frequent target of blog writers Scott Bryant and Ryan Mahoney, who left Harvest in 2010. Filing a lawsuit and asking for a temporary restraining order is his way of saying “enough is enough,” MacDonald notes.

According to the filing in Cook County Circuit Court, the evangelical pastor and church claim Bryant and Mahoney have been publishing false and misleading statements on The Elephant’s Debt, a blog they launched in 2012. The resulting damage to the church’s reputation has caused 2,000 people to leave in the past few years, the lawsuit says.

Also named in the suit is Julie Roys, who is alleged to have made disparaging comments about the pastor and church.

History of the Conflict

Founded by MacDonald in 1988, Harvest Bible Chapel now averages 13,000 weekly attendees in seven locations. It joined the Southern Baptist Convention in 2015. During the past decade, Harvest has been on lists of America’s largest and fastest-growing churches. MacDonald also has a radio ministry, Walk in the Word, and a church-planting ministry, Harvest Bible Fellowship, known for the concept of Vertical Church.

In the legal filing, Harvest says that by 2014, it developed into an organization of more than 100 churches, with 400 employees and assets totaling more than $100 million.

Around 2010, when Mahoney and Bryant departed, the church was reportedly in debt and dealing with leadership conflicts about the appointment of elders. MacDonald has acknowledged past mistakes and apologized to some elders in 2014. But he disputes the bloggers’ claims that Harvest “barely survived a bankruptcy in 2006” and that he has an authoritarian leadership style.

Mahoney used to teach at Harvest Christian Academy, the church’s private school in Elgin, Illinois. In 2010, according to the suit, Mahoney’s contract wasn’t renewed because he spoke out against MacDonald and Harvest in the classroom. Bryant, the church claims, became “equally divisive after being declined a teaching opportunity [at Harvest] that he repeatedly pursued.”

On The Elephant’s Debt, Mahoney and Bryant say they left Harvest because they “were aware of certain issues that were rising to the surface” and “creeping into the pulpit as well.” In 2012, when conflicts arose over the Gospel Coalition’s Elephant Room 2 conference, the bloggers say former Harvest elders and members contacted them about concerns after church leaders refused to address them.

Both Sides of the Story

Mahoney and Bryant say they went public with criticism of MacDonald and Harvest because of the substantial influence of his “national ministry.” They point to “numerous biblical and historical precedents for making a public call for reform when private admonitions have failed.”

Most Harvest-related blog entries on The Elephant’s Debt were posted in 2012 and 2013, and until the recent lawsuit, the blog hadn’t been updated since 2017. Mahoney and Bryant, whose wives were also named in the suit, say being sued is “stunning to say the least.” They add:

“While the authors of this website would never have chosen to resolve our differences in a litigious manner, we are confident that the legal process will ultimately uphold the values of the first amendment right to freedom of religion, freedom of speech and freedom of the press, all of which are essential to safeguarding the values of the Protestant Reformation and our common life.”

“It isn’t that some of the criticism wasn’t fair. I believe in the marketplace of ideas and of regular, vibrant discussion inside a local church. It’s just that their words were often untrue, their information was incomplete, and over time their tone of reasonableness disintegrated, exposing their obvious goal of ending our ministry.”