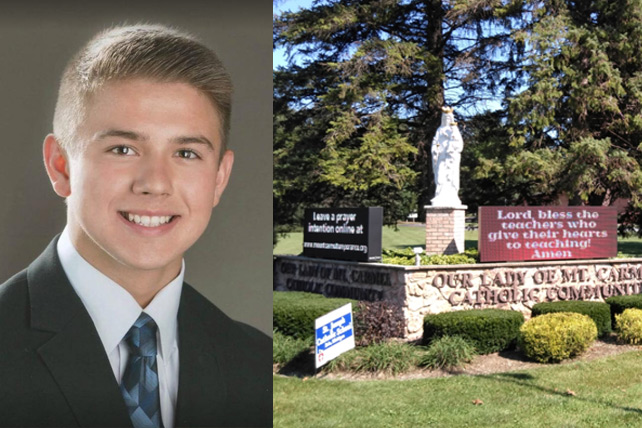 After giving a funeral homily that one Catholic leader calls “a pastoral disaster,” a Michigan priest has been pulled from preaching at funerals while he gets “assistance.”

Following the December 4 suicide of their 18-year-old son, Maison, Jeff and Linda Hullibarger met with the Rev. Don LaCuesta at their lifelong parish, Our Lady of Mount Carmel Catholic Church in Temperance. They didn’t tell the priest how Maison died but requested that the funeral homily emphasize themes of family, love and kindness.

Instead, the parents and other mourners were shocked a few days later as LaCuesta repeatedly mentioned suicide and condemned the act. “There is hope in eternity even for those who take their own lives,” LaCuesta preached. “Having said that, I think that we must not call what is bad good, what is wrong right. Because we are Christians, we must say what we know is the truth—that taking your own life is against God who made us and against everyone who loves us. Our lives are not our own. They are not ours to do with as we please. God gave us life, and we are to be good stewards of that gift for as long as God permits.”

The priest continued: “The finality of suicide makes this all the worse. You cannot make things right again. … Things are left unresolved. … Now you will have to work through this pain by yourselves, or with those close to you now who will need to lean on you even as you lean on them.”

LaCuesta’s homily did include themes of hope, mercy and forgiveness. He said, “Because of his mercy, God can forgive suicide and heal what has been broken,” and, “No deed is too evil to be beyond the forgiveness of Christ.” But Maison’s parents say being blindsided by condemnation made the worst day of their lives even worse. “He basically called our son a sinner in front of everyone,” says Linda Hullibarger.

The Parents Tried to Intervene

After LaCuesta started mentioning suicide, Jeff Hullibarger approached the priest and quietly asked him to stop, but that didn’t work. Then the priest ignored the parents’ wishes to make statements. The Hullibargers had to stop the recessional music to celebrate Maison’s life. They told LaCuesta he wasn’t welcome at the burial, where they gave their own blessing.

In a statement, the Archdiocese of Detroit apologizes that “the family was not served as they should have been served.” It says LaCuesta won’t be preaching at funerals “for the foreseeable future” and a mentor will review his other homilies. Plus, he’ll receive “assistance…to become a more effective minister in these difficult situations.”

That isn’t enough, say the Hullibargers, who want LaCuesta dismissed from the priesthood. Empathy and discretion can’t be taught in a classroom, they say, and no other families should experience their pain. “We’re afraid…they’ll send him off and he’ll do it to somebody else,” says Jeff Hullibarger.

What the Catholic Church Says About Suicide

The Catholic Church has eased its position on suicide, once considered a mortal sin. Now the church says suicide can be forgiven when caused by “grave psychological disturbances,” among other factors. The church notes we shouldn’t “despair of the eternal salvation” of people who kill themselves.

But a divide still exists within the Catholic Church, with traditionalists maintaining a hard line on the issue. “There’s all these kinds of clashes…in Catholicism now because it’s so ideologically divided,” says professor Mathew Schmalz.