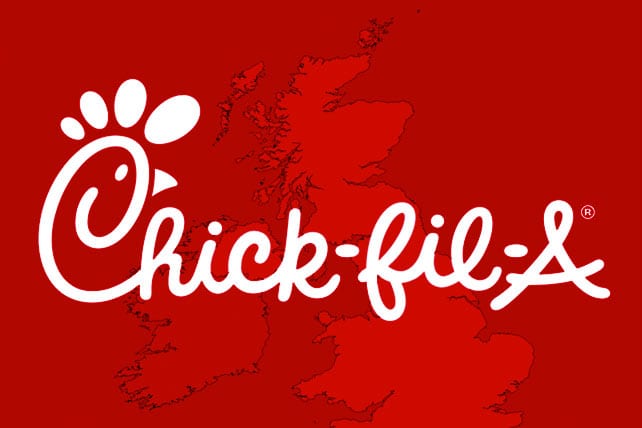 Chick-fil-A has opened its very first location in the United Kingdom. Since Thursday, October 10, it has served “several hundred” patrons in the town of Reading, Berkshire county. However, the shopping center leasing the location to the fast-food chain has just announced they will not be renewing the company’s six-month “pilot period” lease.

The location is meant to test British reception to the American fast-food chain and learn what kind of menu items might hit it off in the UK. However, some are not so pleased with the company’s sites on expansion across the pond. A protest at the Reading store has been planned for tomorrow, Saturday, October 19, 2019, organized by the group Reading Pride.

Chick-fil-A UK Told to ‘Get the Chick Out’

Citing Chick-fil-A’s historically anti-LGBTQ stance, protestors say the UK is “no place for backward practising organisations that support charities including a charity that sent a preacher to Uganda to assist in the ‘kill the gays’ law.”

The goal of Reading Pride’s demonstration is to bring awareness to “the Chick-fil-A chain and their anti LGBT+ stance.” Ultimately, they would like to see Chick-fil-A out of Reading and the UK. So far, the group’s advocacy has managed to convince the shopping mall leasing to Chick-fil-A in Reading not to continue its six-month lease. According to the BBC, a spokesperson for the Oracle Shopping Centre said they have decided “the right thing to do is to only allow Chick-Fil-A to trade with us for the initial six-month pilot period, and not to extend the lease any further.”

Reading Pride is satisfied with the shopping center’s decision. A spokesperson told the BBC the six-month period is a “reasonable request… to allow for re-settlement and notice for employees that have moved from other jobs.”

What Does Chick-fil-A UK Have to Do With the ‘Kill the Gays” Law?

Much like the protests and boycotts that have been organized against Chick-fil-A in the U.S., this protest is focused on the charitable donations the company regularly gives to evangelical Christian organizations. While boycotting Chick-fil-A efforts in the U.S. have most recently focused on the company’s giving to organizations such as the Fellowship of Christian Athletes (FCA) and the Salvation Army, the UK protest is centered on the company’s ties with the National Christian Foundation (NCF) and its alleged connection to a bill in Uganda known as the “Kill the Gays” law.

The bill was first introduced in 2014 but it failed to receive approval. According to Reuters, the Ugandan government has plans to resurrect it. Uganda’s Ethics and Integrity Minister, Simon Lokodo, told Reuters the current penal law concerning homosexuality is insufficient. “It only criminalises the act. We want it made clear that anyone who is even involved in promotion and recruitment has to be criminalised. Those that do grave acts will be given the death sentence,” Lokodo said. He also indicated that Uganda’s President Yoweri Museveni supports the bill and that they will likely vote on it before the end of the year.

However, on October 12, the executive director of Uganda’s Media Centre tweeted that the government was clarifying its stance on the bill. Ofwono Opondo P’Odel wrote, “Government hereby clarifies that it does not intend to introduce any new law with regards to the regulation of #LGBT activities in Uganda because the current provisions in the #PenalCode are sufficient.”

It’s unclear what might happen with this proposed law, given the mixed signals from government officials, but for now, it appears to be tabled.

So what does this proposed bill and Chick-fil-A’s new UK location have in common? The connection lies in Chick-fil-A’s charity, the WinShape Foundation, and the NCF. WinShape has contributed to NCF in the past, and that organization has been linked to the lobbying of this “Kill the Gays” bill in Uganda. The Center Against Religious Extremism wrote a lengthy article outlining the NCF’s connections to other evangelical groups such as the Alliance Defending Freedom and Advocacy International and these groups’ efforts in anti-LGBT rights activism.

Snopes says that while the connection between the WinShape Foundation and the NCF is undeniable, other parts of the protestors’ claim are a little murky. Specifically, the claim that the NCF sent U.S. pastors to Uganda to prop up or help get the “Kill the Gays” bill passed. It is true, notes Snopes, that “many American pastors and preachers—funded either directly or indirectly by the NCF—have in recent years met with, trained, and spoken alongside anti-LGBT Ugandan ministers.” Still, that doesn’t necessarily qualify as a direct connection.

So far, Reading Pride’s protest has 112 people indicating they will participate. It is not clear what Chick-fil-A plans to do once its six-month is up at the Oracle Shopping Centre and how this may impact the company’s launch into the UK.