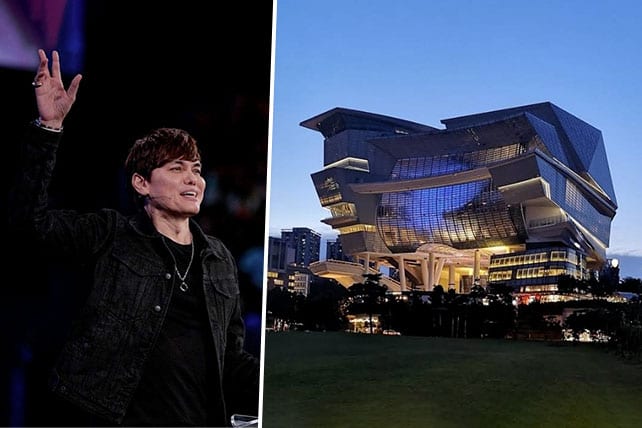 New Creation Church said the purchase was made “to protect the interest of the church.” The mall’s previous owner, a real estate development company called CapitaLand, indicated they were going to put the mall for sale. Upon learning this, the leadership of New Creation decided it was in the church’s best interest to purchase the property.

According to the Straits Times, New Creation has owned the 5,000 seat Star Performing Arts Centre (PAC) located inside StarVista since it was allowed to build, lease, and operate the space in 2007. That project cost the church $500 million, which it finally paid off—mostly through contributions from members—in 2016. That fundraising drive made headlines in 2008 when the church managed to raise a record-setting $18 million in a single day. The church held similar single-day drives in 2009 and 2010, raising an unprecedented $18.8 million and $21.1 million, respectively.

The church told the Straits Times that they will not hold a fundraising drive for this most recent purchase. In fact, the church has the money on hand.

New Creation holds services at the PAC inside the StarVista mall. This is the location from which Prince preaches. Since the StarVista location can’t seat the entire congregation (real estate in Singapore is among the most expensive in the world), his messages are simulcast to two other locations: the Marina Bay Sands Ballrooms and Cathay Cineplex at Causeway Point.

In addition to holding services on Sundays, the church also rents out PAC for performances. Some of the artists renting the space are very famous, the likes of which have included Ed Sheeran, who’s recently concluded “The Divide Tour” grossed over $600 million over the course of two years.

The church’s business arm, Rock Productions, manages the rental of the PAC and it also handled the deal to buy StarVista from CapitaLand. The church is planning to keep the mall as it is for now, with retail shops, restaurants, and convenience stores on the three levels below the PAC. (The entire property consists of 11 levels with the church owning levels 3 through 11.) New Creation is also considering the possibility of having CapitaLand continue to manage the commercial levels of the property.

Who Is Joseph Prince?

Originally from Malaysia, 56-year-old Prince was born to a Sikh priest of Indian origin and a Chinese mother. Prince (who changed his name while working as an IT consultant in Singapore), was a founding member of New Creation Church. He was appointed senior pastor of the church in 1990.

Prince is a frequent guest at Joel Osteen’s Lakewood Church in Houston, Texas and travels extensively throughout the world. Additionally, Prince has a television show called “Destined to Reign,” which is broadcast in more than 150 countries. Prince is known for his preaching focusing on God’s favor and love for people over any other characteristic. Prince’s books are best-sellers; some of them have topped the New York Times Best Sellers list. His published works include The Power of Right Believing, Destined To Reign, and Unmerited Favor.

While some criticize Prince for preaching what they believe is a prosperity gospel, according to the pastor’s website, he sees his message as “setting people free from the heavy yoke of the law, guilt, and condemnation by pointing them to Jesus and His finished work at Calvary.” The pastor and preacher has also been criticized for what many assume is an inflated salary from New Creation. While the church has not explicitly stated Prince’s former salary (according to the church Prince has not taken a salary from New Creation since 2009), a website called Richest Lifestyle proposed that it was $550,000 a year. The church denies that Richest Lifestyle’s information is accurate.

Another thing that Prince’s ministry is known for is giving money to Christian charities throughout Asia which focus on a number of humanitarian efforts. This author has visited one such beneficiary—an orphanage in Thailand that is funded through various donors, one of which being Joseph Prince Ministries.

Prince’s ministry is also known for sharing praise reports from attendees of events and services. Prince himself often reads testimonies from members or viewers of his television program when he preaches at the PAC. The testimonies often include a person being healed of an ailment while listening to Prince’s preaching or reading his books. Some of the testimonies mention taking Prince’s advice to partake in Holy Communion each day.

Ownership of StarVista will officially be handed to New Creation Church by the end of this year.