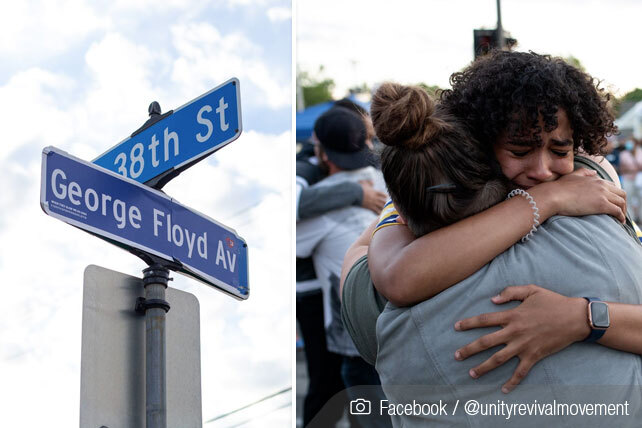 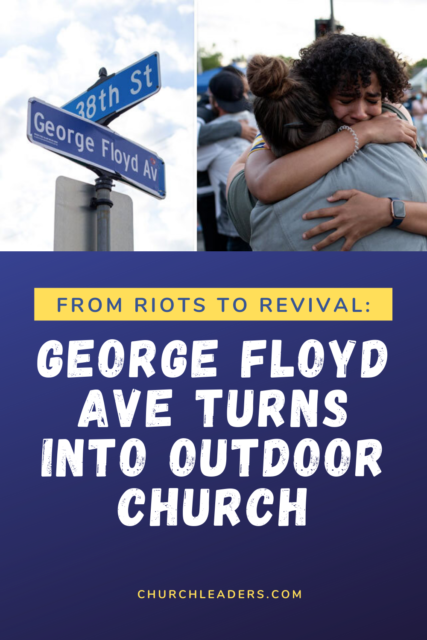 The street corner of Chicago and 38th in Minneapolis where George Floyd died a few weeks ago has gone from a place of tragedy and unrest to a place of revival. Not only has the atmosphere of the area shifted, it’s also gotten a new name. Chicago Ave has been renamed George Floyd Ave. Dr. Charles Karuku and his wife, Lindsey, are leading believers from different churches and locations as they minister to the people showing up to pay their respects to the late Floyd.

The Karukus, an interracial couple living in Minneapolis, hope that what started as a tragedy would transform into a global revival. Charles is the senior pastor of International Outreach Church in Burnsville, Minnesota. He and Lindsey have been setting up an outdoor service each evening this week as people travel to the George Floyd Memorial.

Calling their effort Unity Revival Minneapolis, the Karukus have set up a Facebook page that now has over 1800 followers. Speaking to CBN, Charles said God had been preparing the couple to lead the movement even before Floyd’s death. “I was on a 40-day fast that ended the day after George Floyd was killed,” Dr. Charles told CBN. “When we started the fast, the Lord told us that, on the day of Pentecost, He would do a big thing. We did not know what it would be, so we kept praying and fasting. The day we ended the fast, the riots broke out.”

Instead of running from the riots, the couple decided to go to the place where Floyd was killed and preach the gospel. The movement they started is focused on personal evangelism. They send people in pairs to evangelize to those gathered at the memorial site.

Every day there have been “hundreds of people” coming to Christ, the couple said in a Facebook video. They say it’s been “exciting to see the body of Christ be active.” Being the organizers, the Karukus see their role as providing an opportunity for people who want to do something to address the wound the incident has reopened in the United States. They are seeing people coming “from all over the country, even other parts of the world” to do what they can to help.

Charles says, “Jesus Christ brings us together, and through Jesus Christ we can be united one to another. Because reconciliation starts first with God and then one with another.”

Lindsey says trying to address racial reconciliation without Jesus is often fruitless. “It’s easy to pick out the problems, but we the body of Christ, for this particular problem, we have the solution. And the solution is Jesus Christ. And so until we bring him on the scene and we involve him in these things, it doesn’t matter what we’re doing or who we’re talking to, nothing’s ever going to change.”

Videos of people being baptized and giving their lives to Christ can be seen on Facebook. The Karukus also say people are receiving “words of knowledge” and other miraculous things. Charles described someone telling the crowd that there was someone there who has “an aunt in another state who is praying for you.” Someone else in the crowd received that word and asked “how did you know?” Charles points to the story of the woman at the well with Jesus in John 4 to explain this sign.

At an outdoor service at the memorial on June 17, ministers led the crowd in worship and Charles spoke to them. To honor the memory of George Floyd, Charles asked the crowd to observe a moment of silence and take a knee. Then he preached about forgiveness.

The couple hopes that the riots the country is experiencing will turn into revival meetings like the ones they are facilitating in Minneapolis. “What started on May 25 with the death of George Floyd, it has spread everywhere in the world. And the whole rioting and protesting that started from Minneapolis and spread–can you imagine God turning that around and making it to be a revival spreading from Minneapolis to the rest of the world? That would be a huge miracle. A riot turned into a revival.”