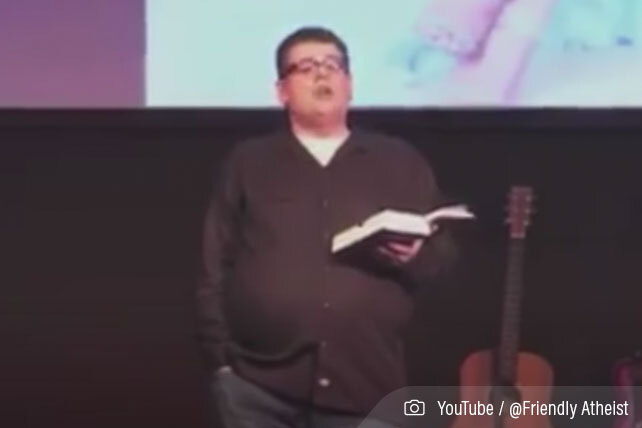 Updated April 20, 2021: Pastor Stewart-Allen Clark posted a statement apologizing to his First General Baptist Church for preaching a sermon in February to his congregation that was also streamed live on the internet. In the sermon, he suggested wives who “let themselves go” are the reason husbands stray sexually.

Pastor Clark said he was “deeply sorry” to all the ladies in the community and those online viewing the livestream. He said his remarks were “insensitive” and “unbiblical.”

He also apologized for embarrassing the church with his comments and took full responsibility for his actions. He reported that he is receiving help from a professional counselor in addition to meeting with an accountability partner.

Having been on a leave of absence since February 28, 2021, he wrote, “I sincerely ask for your forgiveness and to be restored as your pastor.”

Pastor Stewart-Allen Clark’s full statement that is posted on the church’s website is posted below:

On Sunday, February 21, 2021, I delivered a sermon about men’s needs in the marital relationship. In the sermon, I made insensitive remarks about women and made statements deemed unbiblical. To the ladies within the church, ladies in the community, and those viewing our Livestream; I want to say I am deeply sorry for any and all pain or distress that my words brought on you. I want to say to the church that I’m truly sorry that I embarrassed you. I have no one else to blame but myself, and I own the hurt I have caused to both people inside and outside the community. Since February 28, I have taken a leave of absence. I am meeting regularly with a professional counselor. I have secured an accountability partner, and we are and will continue to meet regularly. I recognize and understand that what I said was imprudent and discourteous. I sincerely ask for your forgiveness and to be restored as your pastor. I genuinely believe this is the best way forward.

Sincerely Yours & His,
Stewart-Allen Clark

We, the deacons of the First General Baptist Church of Malden, Missouri, offer this unreserved apology to our congregation, our surrounding communities, our denomination, and the followers of Jesus Christ everywhere. As deacons we became complacent. We accepted God’s blessings toward our church as signs of His favor without adequately attending to our responsibility that the complete principles, truths, and love of Christ are presented from our church’s pulpit. We bear the blame for not offering our pastor counsel, correction, and restoration when errors or inappropriate content was presented. We are called to model Christ’s love through forgiveness and restoration toward our Pastor. This is our goal and we encourage the congregation toward the same love and forgiveness. We should all pray for the unity and harmony of our body that we could advance the cause of Christ in our own lives, in the life of our congregation, and in the lives we are called to witness in the surrounding communities. Let us all trust Christ that He will accomplish His purposes for the Glory of His Kingdom.

Pastor Stewart-Allen Clark of First General Baptist Church in Malden, Missouri, is trending on social media and making national news for preaching a sermon in February suggesting that wives who “let themselves go” is the reason husbands stray sexually.

In a clip captured on YouTube from his sermon before it was deleted by the First General Baptist Church, Pastor Clark is heard saying, “This is why I don’t do marital counseling anymore,” as he tells his congregation if a wife would ask “what can I do?” about a husband that’s been “looking around” Clark’s bold and honest response would be “weight control.”

Showing a picture of former model and former First Lady Melania Trump, Clark said “I’m not saying every woman can be the epic trophy wife of all time like Melania Trump…not everyone can look like that. Amen!” Then he emphatically said, “But you don’t need to look like a ‘butch’ either.” In the clips from YouTube, it doesn’t show whether Clark mentions that Mrs. Trump’s husband, Donald Trump, has been accused of “looking” at many other women while he has been married to her.

“How important is this?” Clark asked while referring to a wife’s weight in a marriage. He said, “I have a friend…he has put a divorce weight on his wife…that’s how important it is.”

Clark then explained that he told his son the reason women wear make-up and perfume is because “they’re ugly and they stink…you don’t want to be ugly and stink!”

The congregation can be heard laughing when Pastor Clark mentioned scientists have discovered a food that diminishes a woman’s sex drive, “It’s called wedding cake,” a joke he stole from the internet.

On March 1, 2021, the General Association of General Baptists posted on their Facebook page that Clark has resigned as association moderator. He was scheduled to be at their July 2022 meeting.

The Executive Committee of the General Baptist Council of Associations said the sermon Clark gave “included comments that are not consistent with the positions and values of General Baptists…General Baptists believe that every woman was created in the image of God, and they should be valued for that reason. Furthermore, we believe that all individuals regardless of any other factors are so loved by God that Christ died for them.”

General Baptist Ministries explained that each of the General Baptist Churches are autonomous from the national organization, and the denomination does not have the authority to remove any pastor or church leader in a local congregation. The Executive Committee did recommended that the Council of Associations and the MoArk Presbytery research the statements and take appropriate action.

On March 2, 2021, First General Baptist Church’s Deacon Ministry posted a statement on their website saying, “Pastor Stewart-Allen Clark has taken a leave of absence and is seeking professional counseling.”

The clips of Pastor Clark’s sermon can be watched below: