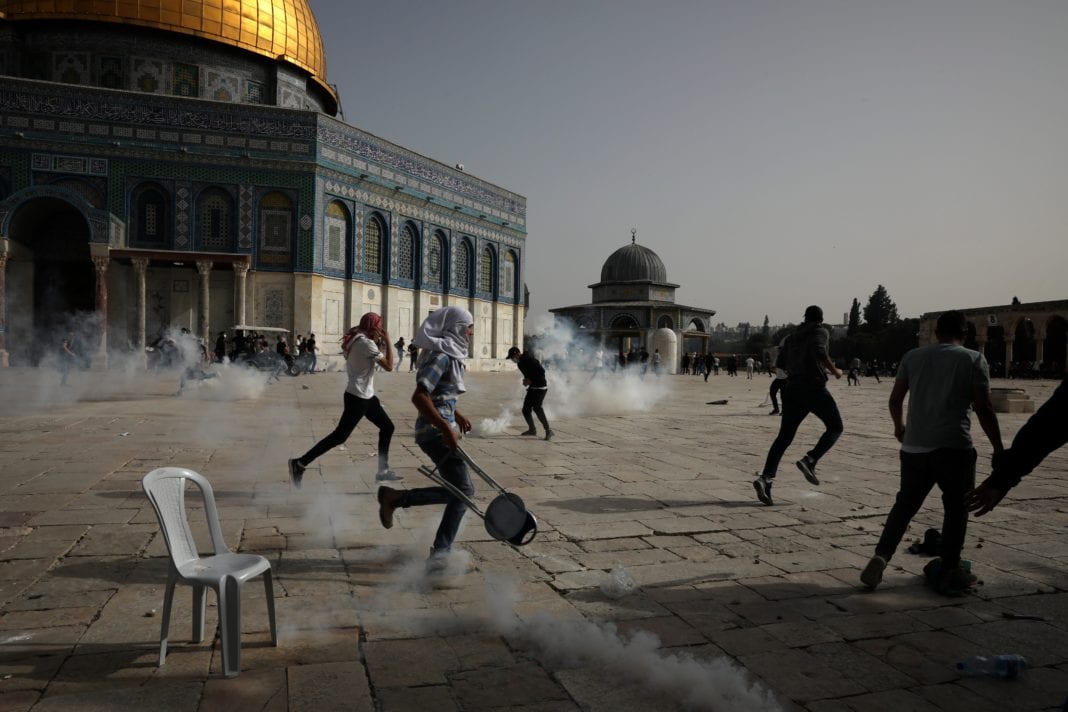 (RNS) — Violence between Gaza and Israel intensified this week to levels not seen for years, with Hamas shooting hundreds of rockets toward the Tel Aviv metropolitan area and Israel retaliating with heavy strikes on Hamas targets in the Gaza Strip.

The buildup to the current conflagration — some are already calling it a new “intifada” or “uprising” —  began several weeks ago in a Jerusalem neighborhood near the Old City, close to the Al-Aqsa Mosque, one of Islam’s holiest sites for more than 1,200 years.

While Muslims pray at Al-Aqsa year-round, the mosque attracts even more worshippers during Ramadan. Wednesday (May 12) marked the end of Ramadan and the start of Eid al-Fitr, a joyous time for millions of Muslims concluding a monthlong fast.

There’s no doubt that the most extreme Jewish nationalists would like Israel to recapture the Al-Aqsa Mosque because they say it sits on top of the ruins of the ancient Jewish Temple, the only remainder of which is the Western Wall.

But except for the setting of the conflict, faith is only tangentially related to the violence. Here’s a quick explainer on the conflict of the past few days, and what, if any, role religion plays.

Why did Israeli police raid the Al-Aqsa Mosque to begin with?

The Israeli government said the police responded after the Palestinians started throwing stones at them. Palestinians say the fighting really began when police entered the mosque compound on Monday and started firing rubber-tipped bullets and stun grenades. More than 330 Palestinians were wounded. Israel said 21 of its officers were, too.

But the underlying tensions may have more to do with a set of clashes in the larger east Jerusalem area, which was captured by Israel in the 1967 Six-Day War and is home to about 350,000 Palestinians.

For weeks prior to the mosque violence, Palestinians had been protesting the threatened eviction of Palestinian families from the Sheikh Jarrah neighborhood of east Jerusalem. At night they would clash with police and far-right Jewish settlers.

Those clashes are in turn part of a long legal battle over who owns the property. Some Palestinians  were relocated to Sheikh Jarrah by the Jordanian government in the 1950s after fleeing their homes during Israel’s War of Independence in 1948.

On Monday, the Israeli Supreme Court was set to decide whether to uphold the eviction of six families from the Sheikh Jarrah neighborhood in favor of Jewish settlers. The court has since postponed the ruling.

So this is a land dispute?

On a large scale, yes. In Sheikh Jarrah, in particular, the dispute originates in the 19th century, when Jews living abroad began returning to what is now Israel and buying properties from Palestinians who lived there. The Jordanians took over the land between 1948 and 1967. Israelis are now claiming it’s theirs again.

The dispute in Sheikh Jarrah takes on political overtones because the neighborhood is part of east Jerusalem, which Palestinians want name as the capital of a future Palestinian state encompassing the West Bank and Gaza. Many Israelis, regardless of their views about a Palestinian state, believe Jerusalem must remain “a Jewish capital for the Jewish people,” and under Israeli control.

What’s Hamas got to do with it?

The clashes between Israel and Palestinians in Jerusalem have united Palestinians far and wide, as have the larger disputes over their displacement and disenfranchisement by Israel. Hamas, the Islamist militant group that controls the Gaza Strip, located about 60 miles south of Jerusalem, sees itself as a defender of Palestinians.

Hamas is at root an Islamic organization born from members of the Muslim Brotherhood, and so it also cares deeply about the Al-Asqa Mosque, which Muslims call the Noble Sanctuary.

On Wednesday, Israel assassinated several Hamas commanders in retaliation for the barrage of rockets on Tel Aviv, Ashkelon and Israel’s main international airport in the city of Lod.

What role does Judaism or Islam play in this?

At heart, the Israeli-Palestinian conflict is a dispute over land. But religion is often the proxy for those disputes, pitting two different ethnicities and religions. Little wonder those tensions tend to flare around religious holidays, both Jewish and Muslim.

But Hamas’ main goal is not war with Judaism, but rather with Israel, which is occupying land it believes is inherently Palestinian.

As often happens, the exclusive claims to parts of the holy city often turn deadly.