VATICAN CITY (RNS) — French President Emmanuel Macron met with Pope Francis at the Vatican on Friday, where they discussed the future of Europe and the results of the COP26 environmental summit in Glasgow in November.

Macron and the pope spoke in private at the Vatican before meeting with Francis’ right-hand man at the Vatican, Cardinal Pietro Parolin, who heads the Vatican’s powerful Secretariat of State. Macron also spoke with Archbishop Paul Gallagher, who handles the Holy See’s relations with states.

“In the course of the talks, a number of international issues were discussed, including environmental protection in the light of the outcome of the recent COP26 in Glasgow,” read a statement from the Vatican (Nov. 26). “There was also an exchange of views on the prospects for the forthcoming French presidency of the European Union, as well as France’s commitment in Lebanon, the Middle East and Africa.”

Macron gifted Pope Francis with two books on the life of St. Ignatius of Loyola, the founder of the pope’s religious order.

The visit by the French president takes place at a time when the Catholic Church in France is undergoing significant turmoil, largely due to clergy abuse scandals that have marred the church’s credibility. Once called the “firstborn daughter of the Catholic Church” in Europe, France is seeing faithful leave the church in droves.

An independent commission called for by the French bishop issued a report on Oct. 5 showing that about 3,000 members of the clergy sexually abused 216,000 minors between 1950 and 2020. The leader of the French bishops’ conference, Archbishop Éric de Moulins-Beaufort, said the staggering numbers stirred “shame and horror” in the church. 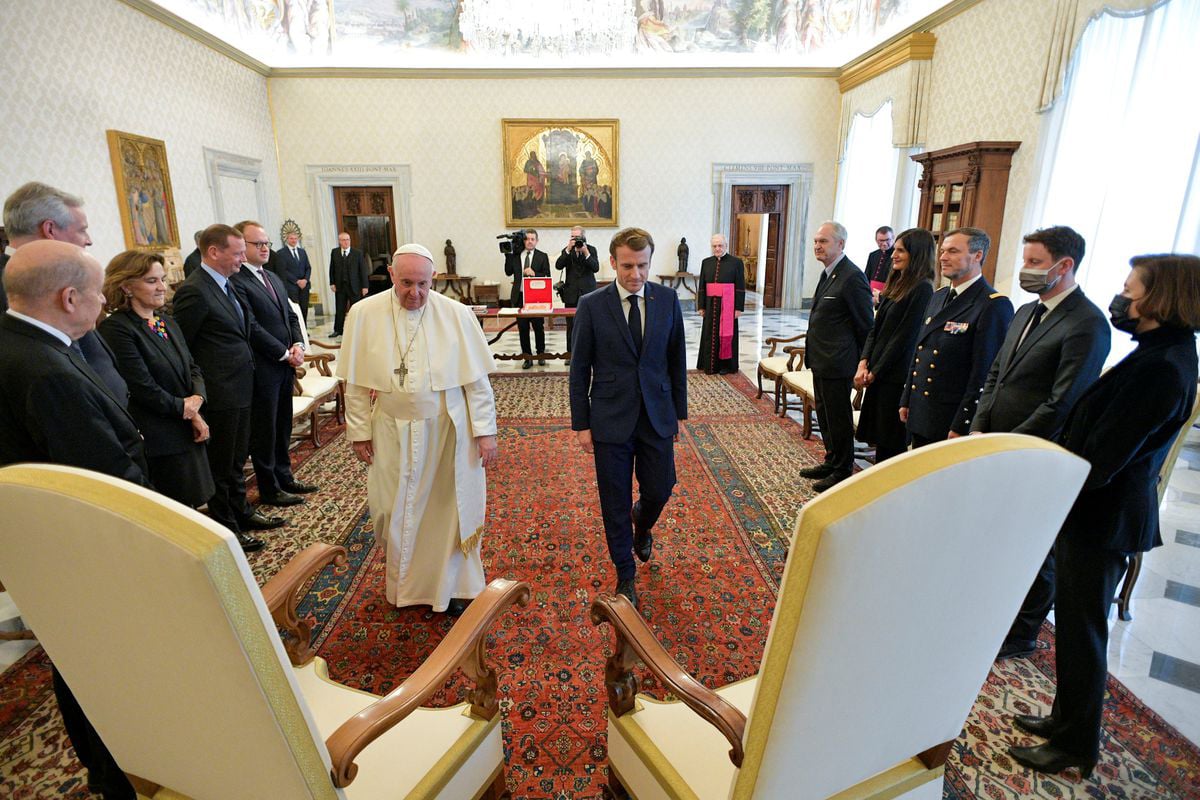 During a public audience Oct. 6, Pope Francis expressed his closeness to the victims of abuse in France — “and also my shame, our shame, my shame for the inability of the Church for too long to put them at the center of its concerns.”

French bishops held a conference Nov. 2-8 in Lourdes where they addressed the report about the sex abuse scandals and promised to start “a vast program of renewal” to prevent further abuses in the future.

Before meeting with Pope Francis, the French president signed a treaty at the seat of government in Rome, the Quirinale, cementing relations between France and Italy in the context of an increasingly divided Europe.

The Italian prime minister and former president of the European Central Bank, Mario Draghi, called the signing of the treaty “a historic moment,” aimed at addressing today’s global challenges. Relations between France and Italy had cooled over the past few years, with the Italian government frustrated by France’s refusal to cooperate in the resettlement of immigrants and refugees.

The welcoming and promotion of immigrants and refugees has been a cornerstone of this pontificate, with Pope Francis making repeated appeals for countries to share in the responsibility. In December, Francis will be visiting Cyprus and Greece, where the question of migrants and their perilous journey across the Mediterranean Sea will likely take center stage.

Reckoning With Their History, Lutherans Issue Declaration To Indigenous Peoples

UPDATE: Britney Spears Responds to Claim Catholic Church Did Not Deny Her a Wedding Venue