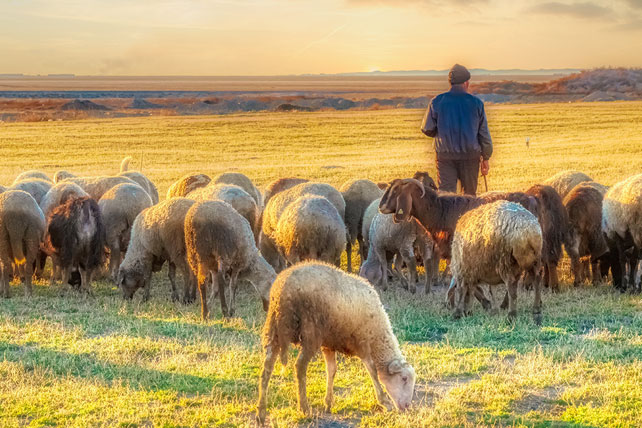 At our final evening prayer service before we left Shanghai to repatriate to the States, our church members took the time to tell us how thankful they were for themselves. Sounds a bit pretentious, doesn’t it? But, in a sense, it’s true. I’ll explain. After a difficult 2019, we prayerfully decided to transition from the church where I had served as the senior pastor for the past six years. This congregation is incredibly sweet, generous, and encouraging; I’ve been so thankful to the Lord for the opportunity to serve them. I can’t imagine a better scenario or a sweeter season for my first pastorate. I learned that in shepherding, the sheep shape the shepherd.

As we were on our way out, our congregation really went over the top to encourage us, bless us, and serve us. In the aforementioned prayer meeting, another elder opened up a portion of the time for church members to share thoughts of thankfulness for me and my wife, Kim. And then the church parlayed those categories of praise into a time of prayer for us and for the whole church.

It all felt a little like one of those encouragement sessions from a mission trip or a summer camp. You’re in the “hot seat,” feeling somewhat awkward while people say nice things about you. Part of you wants it to end as quickly as possible and another part of you is filled to the brim with godly encouragement. You hate it but you love it. You want to avoid it but it gives you life.

As the meeting concluded, the presiding elder looked my way and said: “Unless, Jason, you have anything you’d like to say.”

I instinctively said, “Yeah”—and then I wiped some tears from my eyes, stalling while I thought about what I should say.

My mind raced back over all the encouraging things that had been said about us in the last half hour. Then this truth hit me: they were responsible for the things they were thanking us for!

So I spoke up: “Thank you guys so much for all of those kind words. But let me point out that all of the positive things you have said are things that were forged through our friendships with you. So, in a weird sense, I guess you’re thankful for yourselves.”

That last line was said half-jokingly, but I believed it. And the more I’ve thought about it, the more I realize how true and essential it is. There’s a necessary and proper symbiosis in shepherding.

For example, one church member said they felt challenged by our practice of hospitality. But it was the Wards and the Tylers and the Ans and the Lius who had challenged us in hospitality. They pushed us to be more sacrificial with our time, to look for people on the fringes of our community, to ask good questions, to do a lot with a little, and many other lessons.

Another church member said they were blessed by my pulpit ministry. I knew how much my preaching had changed from Year 1 to Year 6—it was as different as night and day. It’s laughable for me to compare those early sermons to more recent ones, and I’m sure I feel the same way about Year 6 when I get to Year 12! But it was my wife and Mark and Matt and Danny and Brandon and Marian and Feng and Emily and Chris and Nicola and Jon and countless others who gave me helpful feedback on my sermons, enabling me to grow in biblical exposition by the grace of God.

A few folks mentioned our parenting. But we were simply drawing from a storehouse of godly examples laid down by the Collinses and the Swems and the Chuangs and the Phillipses. Our teaching, loving, educating, encouraging, comforting, disciplining, and devotional life were all indelibly shaped by fellow church members.

I could go down the line with virtually any area of my life and ministry that the Lord has used to impact others. The people we ministered to shaped this minister. There’s a symbiosis to shepherding. Shepherds are shaped by the sheep.

WE NEED TO REMEMBER THIS

As pastors, we need to remember that the Lord will continue to use our local church to sharpen and mature us. Indeed, we are examples to the flock (1 Pet 5:3), but that doesn’t mean we can’t learn from those around us. It’s a tragedy when pastors surround themselves with “yes men” or place themselves at the untouchable top of an org-chart. Instead, we ought to surround ourselves with men and women who love us but aren’t mesmerized by us—with friends who love us enough to see to our growth and development.

If you’re a young or aspiring pastor, don’t be discouraged when you look at older, more seasoned pastor. You may want to be a clearer preacher like the guy on that podcast, or a more instinctual evangelist like that visiting missionary, or a more insightful and gentler counselor like the church’s previous pastor. We see examples of godly shepherding and rightly want to mimic it. But how do we get from Point A to Point B, from where we are currently to where we want to be?

It’s worth remembering: mature Christians didn’t start there. And they didn’t get there through their seminary education or their natural disposition or their book collection. They probably got there first and foremost through life in the local church—shaped by the same kinds of sheep that you are, empowered by the same Holy Spirit that God in His grace has given to you.

The shepherding life in the local church offers nourishment, protection, and growth—all things that the shepherd needs as much as the sheep.