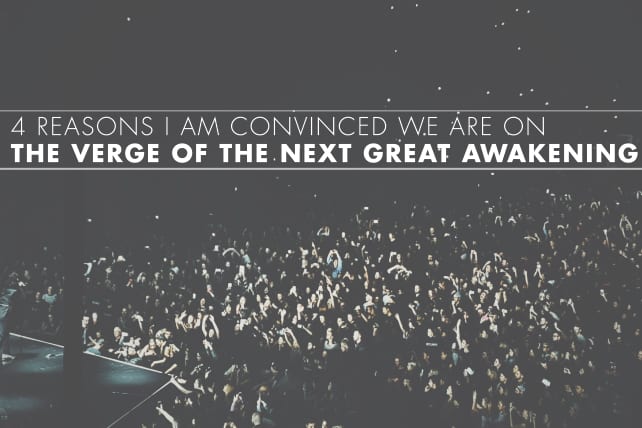 I have been a student of sweeping revivals and massive spiritual awakenings since I was in elementary school. Maybe it was how the Gospel transformed my very tough, very urban family from a gang of fist fighters to a group of street preachers almost over night. Maybe it was the youth ministry that gave me a vision beyond the four walls of our church to a world that was in desperate need for spiritual awakening. But, for whatever reason, I’ve always been drawn to find the “secrets” of what made revivals of the past work.

Great preachers like D.L. Moody, John Wesley, George Whitefield, Charles Spurgeon, Hudson Taylor, William Booth and Jonathan Edwards have always captivated me. I’ve read their sermons, searched their books and scoured their lives to find the strands of Divine DNA that made the spiritual awakenings, they were all a part of, so massively effective and powerful.

And the more I’ve looked to the past the more I’m encouraged about the future. As a matter of fact I’m  convinced that we are on the verge of the next Great Awakening.

Here are four reasons why:

Spiritual awakenings start with God’s people waking up to the power of God unleashed through prayer. A vivid example of this in the early church is found in Acts 4:31, “After they prayed the place where they were meeting was shaken. And they were all filled with the Holy Spirit and  spoke the word of God boldly.”

That’s a whole lot of shaking going on!

Can you feel the tremors of prayer beginning to shake our nation once again? From moms united in prayer to teenagers praying for revival to 24-hour houses of prayer popping up all over the place to the National Day of Prayer getting massive traction, prayer is stirring up across the United States.

My good friend Dr. Malachi O’Brien is not only a prayer warrior on steroids and a fellow student of awakening, but immersed in many of the major prayer movements of today. Recently Malachi said, “With every fiber of my being I personally believe we are on the precipice of another great spiritual awakening.”

One of the reasons he believes that is because of the growing momentum of the prayer movement in this nation!

Along with prayer passion an evangelistic urgency is growing in the church today. I cannot remember a time in my life where there was a more collective focus on the need for evangelism. I’ve seen it in the youth leader gatherings I’ve been a part of as well as the pastors’ gatherings that I’ve preached at.

Just when some were starting to say that mass evangelism in America was dead, groups like Harvest America began filling stadiums with soon-to-be-reached people invited by their already-reached friends.

Key evangelists like Matt Brown are harnessing the power of social media to raise the temperature of evangelism in the United States and spread the good news digitally.

On a personal ministry level, I’ve seen an increase in Gospel urgency across the nation. For the last 25 years I’ve been banging the Gospel gong through Dare 2 Share evangelism training events for teenagers. I’ve preached my heart out challenging teenagers to share the Gospel and youth leaders to build Gospel Advancing, disciple multiplying ministries.

To be honest sometimes I’ve felt like the voice of one calling in the wilderness of youth ministry, challenging both youth leaders and teenagers with the need for Gospel urgency. One nationally recognized youth ministry leader even called me “the last man standing for evangelism in youth ministry.” I told my well-meaning friend that I had no desire to be the last man standing. I’d rather be the first man standing. And, in the deepest part of my heart, I sense that many youth leaders, both male and female, are standing with me when it comes to the dire need of taking the Gospel message to this culture.

I think there’s a growing realization that a focus on politics will not ultimately change this nation…nor will moral reformation or religious education. What many ministry leaders are realizing is that people must have their worldviews, hearts and souls fundamentally transformed…and the only thing that can truly do that is the Gospel of Jesus Christ.

Every major spiritual awakening in American history has had young people on the leading edge. In the First Great Awakening Jonathan Edwards wrote, “The revival has been chiefly among the young.” In the Second Great Awakening D.L. Moody led an army of young people to bring the Gospel to hundreds of thousands. During the Jesus Movement of the 1970s tens of thousands of Jesus-loving, bell-bottom-wearing young people took the Good News of Jesus to the streets.

Youth movements are rising once again.

I think of my friend Nick Hall with Pulse Movement. He is mobilizing Millennials across the nation and around the world for the mission and message of Jesus. Last year Nick and his team gathered hundreds of thousands at the Together event in Washington D.C. Many of those who rallied there were young people who collectively called out to God for revival and then were unleashed to do something about it back home.

These kinds of gatherings are increasing and are needed now more than ever. From denominational youth rallies to massive worship concerts to events like the Passion Conferences, young people from across the nation are gathering, worshipping and refocusing their hearts on Christ and his cause!

On September 23, 2017, Dare 2 Share will be launching an unprecedented gathering of young people at an event called Dare 2 Share Live. This live simulcast event will be broadcast to host churches across the nation. On that day, with God’s help, 50,000 teenagers will be simultaneously inspired, equipped and unleashed to share the Good News of Jesus.

These on-fire-for-Christ teenagers will be unleashed to have 300,000 Gospel conversations. After the outreach portion of the day teenagers will gather once more in these host churches to collectively call out to God for revival. They will all leave with a plan to reach their schools, cities and friends with the Gospel message.

Pray with us that God does something amazing on September 23 and that it becomes a rally point for revival across the nation. To find out how to pray, promote or participate in Dare 2 Share Live click here.

“It does not take vast amounts of money to fill a nation with the knowledge of the gospel. What it takes is ordinary people, on fire with the love of Christ and empowered by the Holy Spirit, who are willing to tell their families, friends and casual acquaintances what God has done for them.” Steve Addison in Movements that Changed the World

Holy discontent is that which takes ordinary people and sets them on fire. It is the refusal to accept things as they are. It is the determination to make a change in this culture and in the church through the power of Christ and for the glory of God. It is fueled, not by selfish ambition or financial gain, but a passion to make Christ known to a world that desperately needs it.

As I talk to youth leaders, pastors and ministry leaders across the nation I am sensing a holy discontent like never before. There is a stirring to obliterate the status quo and return God’s people to her first love…Jesus!

If, as you read this blog post, something is stirring inside you, then join this ever growing movement of Gospel Advancing disciple multipliers. Choose to shake off the shackles of traditionalism and “thats-the-way-we’ve-always-done-it” conformity to launch a new way to do ministry (that’s actually 2,000 years old!).

And then let’s go for it! Revival is not something out of reach! God wants it more than we do! Actually, as I’ve said before, revival is God stirring in the hearts of his people to seize what is already theirs in Christ and then taking it to the world!

I believe we are on the brink of what could be the Greatest Awakening in the history of the church. I am convinced God will not let his church leave the scene with a whimper but with a bang!

The need is great. The time is now. The solution is Jesus!