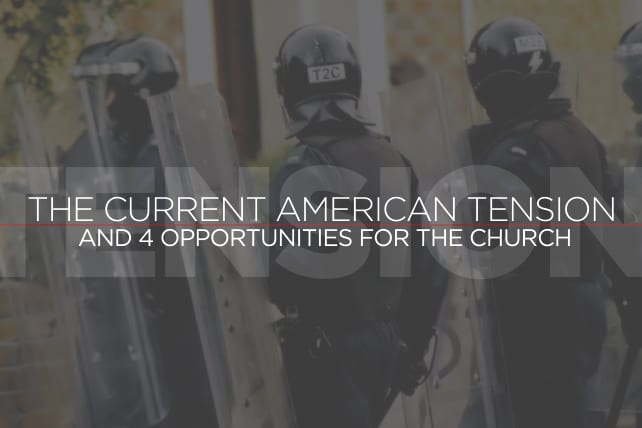 You don’t need to be anything more than a casual observer of American (and Western) culture to know that something significant is happening.

Charlottesville, Ferguson, Baltimore and a host of other cities that have seen events that symbolize the problems this generation is struggling with will, sadly, likely give way to a list of more cities and events yet to come. Terror attacks in North America and a host of global cities seem to happen weekly. In addition, the current political division is as bad as it’s been in a long time.

The violence, destruction and tension have become so normal that we no longer even post the “Pray For [Insert City Here]” graphics that used to earnestly spring up on social media whenever a new crisis emerged. There are just too many, and we’ve become too numb.

Add some unbelievable political tension into the mix, and most of us don’t know how to respond. Even as someone who lives north of the U.S. border, has a great affection for the U.S. and has many friends in America, we all feel the tension to one extent or another and are living through it.

No church in Canada or anywhere in the West can pretend we’re not living in an age of heightened tension.

So how do we respond to the situation we’re in? While some in our culture believe the church is part of the problem, I believe it’s key to the solution.

Jesus is the love we keep missing as human beings. He is who we all really long for, and in Christ, we find our unity.

Here are four ways Christians and the church can bring hope to the increasingly fragile culture around us.

1. Be a Confessor in a Culture of Blame

It’s so easy to point the finger at someone else. This is true in human relationships (think about your marriage), but it’s also true culturally.

So when any kind of tension arises, ask yourself what you own before asking anyone else what they own.

Violence begins in our hearts before it ever hits the street. A nation and the world become divided because our hearts are divided.

Too often Christians focus on what we can’t change and ignore what we can.

All of this is what confession is designed to root out.

Imagine what would happen if Christians owned the racism, sexism and other isms that live in our hearts. Imagine what might happen if we confessed that we have not adequately loved people who are different than us.

Maybe true prayers of confession are rare in church  (they are usually either rote or non-existent) because they’re rare in leaders.

But…you are not always right. And you don’t hold a monopoly on truth. Your perspective and mine are flawed. None of us loves perfectly or deeply enough.

When you confess that you’re part of the problem, the solution becomes clearer. You will never address the wrong you don’t confess.

2. Foster Conversation in a Culture That Shouts

Thanks to social media, everybody has a platform. A ridiculous amount of people use theirs to shout rather than to listen.

Just check your feed at any given moment, and it’s likely crammed with everything from people WHO SPEAK IN ALL CAPS to links denouncing the other side (whoever that other side is) to proclaiming how they’ve figured out what all the dumb people haven’t.

This translates into real life too. Conversations seem to be devolving into an exchange of monologues between two people who don’t seem terribly interested in each other.

People appear to be talking at each other as much as they’re talking with each other. I’ll share my opinions and then you can share your opinions. That’s not conversation.

You know what’s missing in the current culture?

Well, a bunch of things.

Genuine, authentic conversation features all of those elements and more.

When was the last time you had a genuine conversation with someone who doesn’t share your values? By that, I mean an exchange where you listened as much as you spoke? Tried to understand more than you tried to be understood? Cared about them as much as you ever cared about your point of view?

Love listens. So should Christians.

3. Broker Meaning in the Age of Information

Information used to be rare.

Remember when you couldn’t just google an answer to any question? You had to ask. Find an expert. Pull an encyclopedia off the shelf.

The last decade has fundamentally changed that in two ways:

1. You can find almost any information or content you want for free. When was the last time you googled something you couldn’t find an answer to without paying? Exactly.

As a result, the crisis in our culture no longer centers on access to information. We have more information than we know how to process.

You’ve felt this every time you’ve scrolled through your social media or news feed and thought “there is nothing of value here at all.”

In fact, on some days, the constant rants, drivel, trivial observations, bragging, hatred, ranting, self-promotion and complaining has made you think about giving up social media altogether.

Consequently, we have a new crisis. The current crisis in our culture isn’t a crisis of information, it’s a crisis of meaning. We have a million springs of endless information and we have no idea what it all means.

The challenge for church leaders moving forward is not just to produce more content. The challenge is to provide meaning.

I believe the future belongs to leaders who broker meaning in the sea of endless content.

It follows, then, that the key to providing meaning isn’t more, it’s better. More content will simply get lost the constant chatter.

More without meaning will make you less relevant. You become yet another unhelpful voice.

Better is not nearly as easy as more. Better requires thought, reflection, digestion and ultimately resonance (it’s resonance that tells you your content is connecting).

This provides a huge opportunity for church leaders. Who better to provide meaning than the leaders called to share timeless truth in an era starved for meaning?

There’s a generation of people looking for love in a world of hate. Looking for truth in an age of relativity. Looking for something to cling to when everything else seems to be falling apart.

Leaders who read widely, pray, digest, think and above all produce content that actually helps people find meaning will become leaders in their field.

If there was ever a time for the countercultural message of Christianity to offer a real alternative, this is it.

When the church simply reflects the social or moral values of an increasingly post-Christian culture, we echo the current emptiness; we don’t echo God.

In an age that says “Hate your enemy,” Christ says “Love him.”

Christianity is a fusion of grace and truth because Jesus is the embodiment of grace and truth. The challenge, of course, is that most of us instinctively lean toward either grace or truth. It seems easier, but it’s incomplete and wrong.

Grace without truth produces a spineless sentiment that helps no one.

Truth without grace is cruel, a twisted imitation of what love actually looks like.

Neither reflects the heart of God.

Christ is truth and grace majestically woven together. He is love that moves you out of sin. He is truth that simultaneously makes you realize how horrible it really is, and how loved you really are.

Fusing grace and truth is an exceptionally difficult venture and is usually only successful when you spend significant amounts of time on your knees and when the source of your attempt is actually Christ himself. I am rarely good at it, flipping from one side to the other too quickly.

But when you see grace and truth fused, it takes your breath away.

The more we reflect the fusion of grace and truth, the greater the alternative we offer people. Without Christ, people either get cheap grace or fake truth.

In Christ, people experience the fusion of grace and truth every heart most deeply longs for.

What Are You Doing to Diffuse the Tension?

A few things to think about before you go. I promise you, these are as challenging for me as they might be for you:

How diverse is your dinner table? Do you only ever have people over to your house who look like you, make the same amount of money (or more) than you do, share the same values as you? Or are you engaging people who are different than you? This is about race but also goes far beyond race to the myriad of other barriers we erect in our lives.

When was the last time you listened as much as you spoke?

When was the last time you confessed your sin to God rather than trotting out someone else’s asking God to change them?

How long has it been since you served someone who is different than you…helped them tangibly?

What are you doing to diffuse the tension you feel that’s helped? I’d love to know.