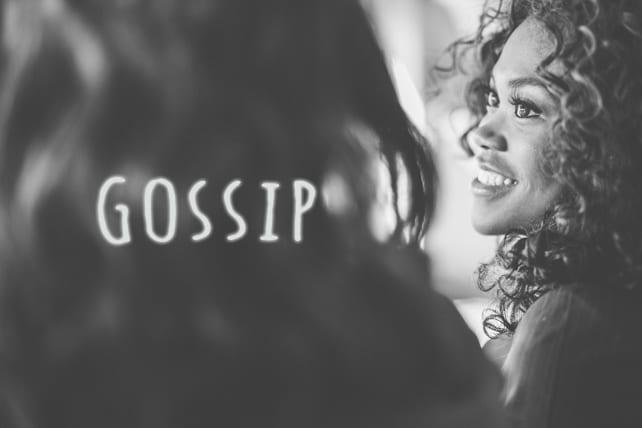 Have you ever pondered, “Why do people gossip?”

I realize hate is a strong word, but it’s the one I prefer here. I’ve seen so many negative results caused by gossip.

Gossip happens in families, in the workplace—wherever two or more are gathered—gossip will be among them. And, gossip is always destructive to building healthy relationships. I hate gossip in any setting, but especially in the church.

Relational gossip, especially among believers, shouldn’t even exist. We have to violate a lot of principles of God’s plan for the church and believers for it to be present at all.

Gossip is destructive and has no part in our lives or in the church. I’ve counseled with families caught in drama, such as after the loss of a loved one, and gossip is fueling their division. I have witnessed gossip destroy a healthy work environment. And, I have worked with so many churches where gossip—drama—is a leading cause of why the church isn’t healthy, isn’t growing and isn’t accomplishing all God has for the church.

Along the way, I’ve learned some answers to the question, “Why do people gossip?” as well as a few other things about the nature gossip.

Not all rumors are true. In fact, most aren’t, especially not exactly as they are presented. When we repeat things we shouldn’t we seldom get all the facts straight. There is usually something we don’t understand.

People like to expand on what they think they know. People love to speculate and add their opinion to what they’ve heard. When they do the story gets further from the actual truth. People enjoy telling others “the good stuff.” With practice, some have even learned to make things seem “bigger” and “better” than reality. (And, I don’t mean better in the positive sense.)

There is almost always more to the story than what you know. Whenever multiple people are involved there will be multiple sides to the story. Even in stories involving only one person—if we aren’t hearing it from them—we only know what we know. We don’t know another person’s thoughts, history or individual circumstances. And, it may or may not be what your mind stretches it to be.

Sometimes people don’t consider the ramifications of what they are doing. This is so potentially damaging. I have seen gossip destroy a person. I’ve even seen it run people from the church—and then watch as some of the people involved in creating and furthering the drama wonder later what happened. They honestly didn’t realize the damage their rumor-repeating was causing. It’s so easy to get trapped in drama without considering the damage being done to others. I’m convinced, at least the hopeful side of me is convinced, people don’t always intend the harm they cause with gossip.

Gossip is fueled by reaction. When someone tells you something you shouldn’t even know, the way you respond often determines how many times it’s told again. If you gasp with wonder and interest the person sees they have something worth repeating and are motivated to seek the same reaction in others. If, however, you appear not as interested or intrigued, the person may feel disarmed somewhat from sharing it more.

Some of the juiciest gossip is disguised as a prayer request. Be honest. You’ve done or seen this done many times. People do this to pastors all the time. “Pastor, please pray for the Jones family. I’ve heard their son is really causing them problems. Just wanted you to know so you could be praying.” And, actually, many times they just wanted me to know so they could do the telling.