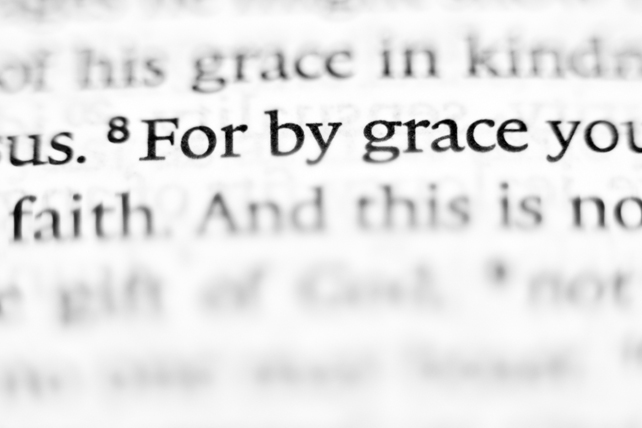 I live daily with a paradox. On the one hand, grace is audacious, extravagant, immediate and all-embracing. On the other, grace is painful, reconstructive, surgical and slow. Grace is the deliverance from Egypt and grace is the long, grueling journey through a blistering wilderness.

I live with this paradox because of the work I do. With my multiple hats—professor, pastor, therapist, spiritual director—I become a conduit of God’s lavish grace, a steward of it, a surgeon of the soul in need of it. And because grace refuses simplification, refuses to be reduced to a get-out-of-jail-free card, we must hold the paradox when we work with particularly complex people.

I’m thinking right now of pastors I’ve worked with over the years whose narcissism was so entrenched in their psyche that lavish grace needed to work itself out over years and years. Some time ago I worked with a pastor whose masks of charm, personal fitness and a keen intellect propelled him into success, but who was utterly disconnected from his true self. Revelations of abuse and sexual infidelity came as a shock to his adoring flock, many who were quick to say, “Who of us is without sin? Let us forgive as he taught us to forgive.” This pastor’s narcissism, now armed with a new mask of repentance, quickly turned the narrative from his sin to his redemption story, one his flock was happy to embrace.

I recall sitting with his wife weeks after as she struggled.

“I feel like God calls me to forgive him, but I can’t help but feel like he gets off the hook and I’m left beaten and bruised. I’ve even had people tell me that I was to blame for his infidelity. Was I?” Mired in guilt and shame, she felt like she’d be failing him and failing the church if she didn’t quickly forgive.

As I sat with the pastor, he had many reasons for his actions—many years without a sabbatical, burnout, lack of emotional support from his wife, a ‘weak’ elder board. He was quick to say, “I failed.” But he never got specific. In one session, I asked him for permission to say something hard to him. He agreed. I offered this to him: “What would it be like to say this to your wife: For years, I emotionally abused you by mocking your effort, your appearance, your faithfulness. I played the part of obedient pastor, but in secret I abused and tormented you. When pornography was not enough to anesthetize away my shame, I intentionally and meticulously groomed women who adored me for back-rubs, blowjobs and sex in my office, on the floor right next to my desk and our family picture.”

He sat silently, head down, as if it was the first time he’d considered something other than a narrative that would preserve his shiny veneer. I suspect he was weighing his options, as he always did, so very fearful of an ultimate confrontation with himself. He looked up at me, steel-eyed: “Chuck, can I say something to you? What would it look like for you to take the Gospel seriously, to help me gain my esteem back and to help my wife forgive me?”

I’ve had some version of this same story play out about a dozen times with pastors and/or ministry leaders of some kind.

This man needed the grace of wilderness. He wanted deliverance from Egypt and a quick flight over the wilderness to the promised land. He ultimately chose the latter. And he used his story as a real, live grace story.

When we treat grace like a band-aid rather than the major surgery it often demands, we trivialize it. Real transformation is a slow-cook process, especially for narcissists and abusers so hidden from their true selves and so prone to re-configure the masks for the sake of a new narrative and to avoid the pain of self-confrontation. The wilderness of grace is the place where the narcissist’s false self is dismantled, but it’s also the place where the systems and structures that buttressed and supported it are confronted and dismantled.

I sometimes wish I knew more about St. Paul’s three years in the wilderness. Once a murderous moralist, he was confronted by the living Christ on Damascus Road. Something new was born in him that day, but we know that he did not immediately take to the streets to evangelize. Some like to imagine these three years as an intense Bible-study training program. I like to think of them as a time of deconstruction—of old narratives, of the masks that served him in his old life, of an ideology of tribalism and abuse. I imagine that leaving his old life behind cost him dearly—relationships, reputation, income, so much more. When he did return, we know that he still had an edge, that he could be oppositional, that his words of reconciliation didn’t always match his relational style, that he wrestled with his inner contradictions. But he was an honest man—honest about his story, the toxicity of his old life, and his need for grace.

Grace is not about saving face. Grace often plunges us into the depths of despair.

It requires the loss of everything that buttressed the old self. As much as we’re culturally conditioned to good, old American quick redemption stories, we’ve got to reclaim a biblical imagination for the wilderness of grace. I’m suspicious of those who are quick to return to ministry, quick to write their redemption story, quick to embrace the adoration of their devoted followers. Those who I’ve seen do the real, hard wilderness work of transformation go away for years, and have no expectations for what will happen. All is given to the surgical work of grace under the care of experienced practitioners.

I reconnected with someone like this not long ago. I hadn’t seen him in years. His ministry fell apart when he cultivated a relationship with an old girlfriend on Facebook, and began secretly meeting with her. He resisted the wilderness of grace, at first. He scrambled to save his marriage and ministry. But he had a wise community. They held him firmly, in painful love, and showed him a desert path.