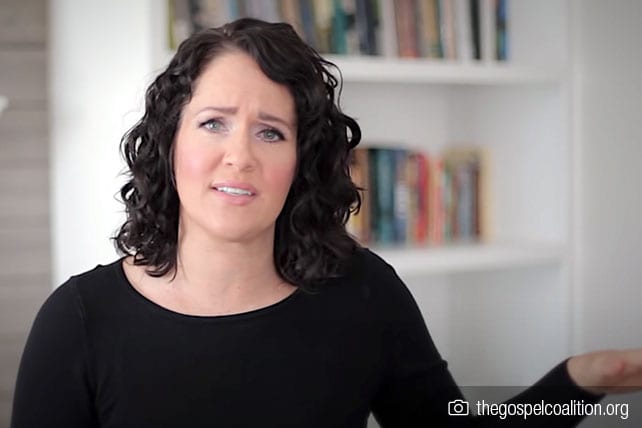 My spirit sprung to prayer with catlike reflexes as I watched my 2-year-old daughter tumble down the 15-step staircase. I stood helpless as her little body hurled toward the hardwood floor.

In that moment, I was never more aware of the wound that had been festering for months.

The wound was doubt.

I had been experiencing doubt about God’s existence and the Christianity I had believed to be true my whole life. But until that moment, I didn’t realize how deeply that doubt had wrapped itself around my mind. To the casual observer, my daughter fell, I prayed, and she was okay. But for the first time in my life, I wasn’t so sure it was divine intervention. For the first time I felt foolish . . . for praying.

I felt silly for crying out to God in that desperate moment. It was terrifying to realize the faith that had once been my identity now seemed more like a child’s fairy tale than the explanation of reality.

For me, doubt was an entirely new concept. Growing up, I watched God’s power at work in people’s lives, in my life. I knew God was real. I knew Jesus died for my sins, was resurrected, and was coming again. I knew the Bible was his Word, and I couldn’t be convinced otherwise. I was active in youth group, went on mission trips, and emerged as a trusted leader among my peers. I was the kid who no one would have dreamed would doubt her faith. I was the kid no one worried about, the one who would be just fine.

But now, in my early 30s, I wasn’t fine. I had just spent four months enduring the skepticism and intellectual attack of an agnostic “pastor” who invited me to be a part of a study group at church. A pastor who won my respect and trust had dismantled my faith, one belief at a time.

Doubt Isn’t the Opposite of Faith

By God’s grace and unfathomable mercy to me, my faith was rebuilt. But during my time of doubt, I suffered from an all-too-common misunderstanding about what biblical faith is. I thought doubt and faith were opposites—that if I questioned what I believed, I’d somehow be a failure in God’s eyes. But this definition of faith has more in common with how atheists understand faith than how the Bible defines it. Atheist Richard Dawkins defines religious faith as “blind.” In a debate with John Lennox, he said, “We only need to use the word ‘faith’ when there isn’t any evidence at all.”

But in the Bible, “faith” means trust, not blind belief. We all put our trust in various things every single day. Every time we drive our car across a bridge, we trust it will hold up like it has many times before. We trust, not because we have 100 percent proof, but because we have good evidence to believe the bridge won’t collapse.

A faith without some doubts is like a human body without any antibodies in it. People who blithely go through life too busy or indifferent to ask hard questions about why they believe as they do will find themselves defenseless against either the experience of tragedy or the probing questions of a smart skeptic. A person’s faith can collapse almost overnight if she has failed over the years to listen patiently to her own doubts, which should only be discarded after long reflection.

According to Keller, the strongest form of faith is one that has wrestled through doubt. The Bible is full of great examples. Here are three doubters Jesus responded to with mercy.

Mark 9 tells the story of a man desperately trying to find healing for his son who was demon-possessed. This particular demon caused the boy to become mute and would often seize him, throwing him into fire or water to kill him. The man asked Jesus to have pity on him and heal his son. Jesus responded, “All things are possible for one who believes.” Without hesitation, the man cried out, “I believe; help my unbelief!” (Mark 9: 24).

It’s a simple, heartfelt prayer that Jesus readily answered by healing his son. He commanded the demon to come out and restored the boy to health and wholeness.

The man asked for help with his doubt, and Jesus came to his aid.

If there’s any biblical figure who should have no reason to doubt, it’s John the Baptist. This is the man who was filled with the Holy Spirit before he was even born. This is the the man who came out of the wilderness proclaiming the coming Messiah. This is the man who baptized the Son of God, witnessed the Holy Spirit descending like a dove, and heard the audible voice of God. Yet at the end of his life, while rotting in Herod’s prison cell, he doubted. “Are you the one who is to come or should we look for another?” (Matt. 11:3).

This is the question he sent his disciples to ask Jesus—and Jesus didn’t scold him for asking. He didn’t reply, “John, you shouldn’t doubt!” or “We don’t ask those types of questions here!” No. Jesus performed miracles in front of John’s disciples and sent them back to testify, even referencing a prophecy about himself that John would understand.

John asked for reassurance, and Jesus was happy to oblige.

Like today, resurrections weren’t everyday occurrences in the ancient world. If they were, they wouldn’t be considered miracles. It was perfectly rational and intelligent for Thomas to ask for evidence to back up the claim of his fellow disciples. When Jesus finally appeared to Thomas, he didn’t shame him for his skepticism. Instead, Jesus said, “Put your finger here, and see my hands; and put out your hand, and place it in my side. Do not disbelieve, but believe” (John 20:27). It was only after offering evidence that Jesus instructed Thomas to believe.

Thomas asked for evidence, and Jesus delivered it.

In his book Doubting Toward Faith, Bobby Conway writes that doubt is directional. We can doubt toward God, or we can doubt away from him. If you’re struggling with doubt, I encourage you to doubt toward God. If you can’t think of what to pray, pray like the great men of faith who came before you:

God is waiting to help and reassure you. The evidence for his existence and the truth of Christianity is plentiful. We don’t need to be afraid of doubt—the gospel can stand up to skepticism and questioning.

Jesus could handle the doubts and questions of the desperate father, John, and Thomas. He can handle yours too.