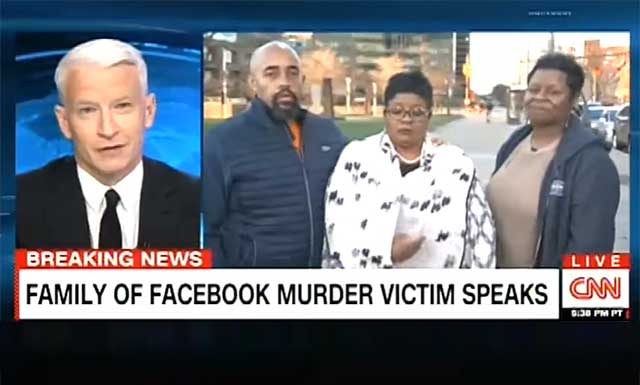 Steve Stephens, the suspect in the case of Robert Godwin’s murder, has committed suicide in Erie, Pennsylvania following a police chase.

The children of Robert Godwin, the gentleman who was murdered on Sunday, April 16, 2017 in Cleveland, Ohio, spoke with Anderson Cooper live on CNN. In their short interview, they told Cooper what their late father had taught them: “About God…how to fear God…how to love God and how to forgive.”

The Godwin children explain how they have forgiven their father’s killer and want to “wrap our arms around him.” Cooper is shocked that this family could forgive the man who murdered their father, but they explain that they harbor no animosity against him. Furthermore, they would not be able to forgive if they did not know God as their God and Savior.

This type of forgiveness can only come from the power of Jesus Christ.

The siblings’ example reminds me of the fact that Jesus died for us on the cross, when he didn’t have to. He had every right to claim his innocence and refuse to take our punishment upon himself. Yet, he chose to endure the cross for our benefit. Essentially, we have been given a free pardon by Jesus. With this knowledge, I can only conclude that I must rely on the supernatural mercy and grace of Jesus to lead me to forgive even what seems unforgivable. In these moments, I too, wish I could be a Godwin.

As I watch this video, I ask myself: Are you living today like you have been forgiven?