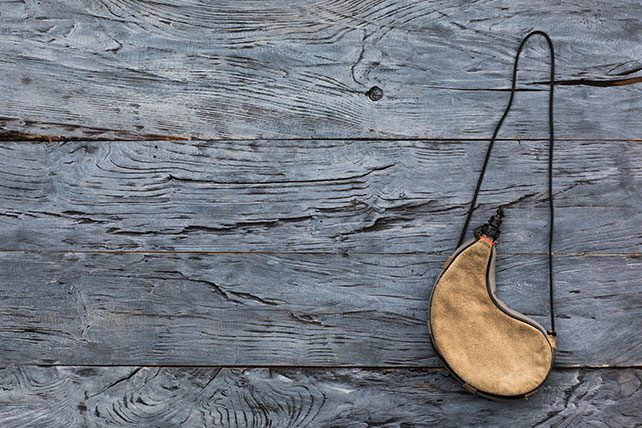 Here is a real-life parable about new wine old wineskins:

The word pertinacious means holding obstinately and stubbornly to a belief, from the Latin, pertenax – a thoroughly firm hold. The Flat Earth Society is nothing if not pertinacious. This society clings to an archaic belief that the earth is a flat disc with magnetic north in its center. One understands how this belief could have been popular for the first 5000 or so years of human history, but it takes a more gymnastic use of mathematics to keep the faith today. Adherents to this model of geography employ elaborate explanations of the physics that account for the masts of ships appearing on the horizon before their hulls. They possess theoretical paradigms that explain how eclipses and seasons occur. Not even sailors’ circumnavigation of the globe put a dent in their faith. But then came the satellite images of earth taken from space, published in the 1950s, followed by the eye-witness reports when the astronauts of Apollo 11 returned from the Moon, toting a slew of selfies with the earth as a geoid globe in the background. Surely now the Flat-Earthers would cry uncle? And yet, Samuel Shenton, an unphased member of the Flat Earth Society, declared condescendingly that “it is easy to see how a photograph like that [you know, of the geoid planet from the Moon’s vantage point] could fool the untrained eye.”

The society consists of over 3,000 pertinacious adherents. I wish they’d listen to that song from Frozen and just “Let it go!”

In Luke 5 we meet another pertinacious group. Jesus had been seen eating with Matthew and the Pharisees accused him of dining with tax-collectors and other sinners. Then they ask Jesus why his disciples do not fast as the Pharisees’ disciples do. So Jesus responds with a trident parable intended to expose their legalistic hearts. In this series of parables we see three obvious truths about legalism.

1.LEGALISM IS INAPPROPRIATE IN LIGHT OF GRACE

Luke 5:34-35 And Jesus said to them, “Can you make wedding guests fast while the bridegroom is with them? The days will come when the bridegroom is taken away from them, and then they will fast in those days.”

Picture a wedding. Celebration, laughter, music, dancing, food, and wine are the order of the day. Now imagine that after the newlywed couple exits the church doors under a shower of confetti, the pastor announces that the couple has asked to do something a little different for their reception. Instead of serving a meal and throwing a party, they ask that we all spend the next three hours in solemn prayer and fasting for the plight of those who are starving worldwide. Do you think you would you hear whispers of ‘Wow, how spiritual they are’? No. Over the protestations of grumbling stomachs you’d hear protestations of grumbling voices saying ‘What a couple of wackos they are! I want my gift back!’

Is there something wrong with fasting? No, of course not. Fasting is a spiritual discipline that is appropriate in the life of mature believers… but never at a wedding!

At a wedding, fasting is inappropriate. Not wrong, or sinful, just not apropos for a celebratory occasion.

That is Jesus’ point. Your personal convictions are only helpful if they are subordinate to the law of Christ.

So you may decide that you will never drink alcohol, never smoke, never watch movies, never use credit, never dye your hair, or any other restriction that has the intention of fostering sanctification in your life. But it’s important to remain aware of which rules are of your own making, and which are actually in the Bible for all Christians to obey.

A church may decide that baptisms will be done in a church service by an elder, or that the Lord’s Supper will be taken monthly, or that the pastor will wear a collared shirt. But the Bible does not mandate any of that. So, in parts of Africa when the pastor shows up without a collared shirt, or Bhutan where baptisms are done in a river, or in Holland where Communion is served once every three months, you have to be willing to jettison your rules as inappropriate for their culture.

2. LEGALISM IS INCOMPATIBLE WITH GRACE

Luke 5:36 He also told them a parable: “No one tears a piece from a new garment and puts it on an old garment. If he does, he will tear the new, and the piece from the new will not match the old.

Old clothes are familiar, comfortable, well worn-in. You grow attached to them, but they get out of style, lose their color, look shabby, and may become threadbare and cease to meet your need. New clothes are unfamiliar, unpredictable, take getting used to, but they may be more suited to the need at hand.

But one thing is sure: you can’t mix them. When you by a new pair of jeans, you don’t cut a piece off to patch your old comfy pair. You’d ruin them both!

Traditions can also be familiar, comfortable, and predictable. But they sometimes need to be updated to meet the need at hand. These Pharisees wanted Jesus to keep the old traditions of law while he was trying to introduce the New Covenant of grace.

Hebrews 8:13 In speaking of a new covenant, he makes the first one obsolete. And what is becoming obsolete and growing old is ready to vanish away.

The old cloth refers to the old Jewish traditions, based on the old Law; the new cloth is the New Covenant of grace.

And they are incompatible.

Then in Luke 5:37-39, Jesus makes the same point again: And no one puts new wine into old wineskins. If he does, the new wine will burst the skins and it will be spilled, and the skins will be destroyed. But new wine must be put into fresh wineskins.

They didn’t have wine bottles – they had goats. So if you made a sack out of goatskin and put new wine in it, as the liquid fermented it released little bubbles and the air inside the sack expanded. But that’s okay, because the new leather stretched with the wine. When the wine stopped expanding, the leather would, over time, become hard, inflexible, and rigid. You know, like a legalist.

So Jesus is saying that everybody knows: if you put new wine (that is still bubbling) into a rigid old wineskin, you’re making …. a wine bomb!

You can’t add Christ’s grace to your rigid system of traditions.

You see this when someone enjoys a liberty the Bible allows, but the legalist prohibits. The legalist says: Christians don’t get tattoos. Then one day he notices a tattoo on the ankle of a respected lady in the church. You know what happens? Wine bomb! A messy, inappropriate confrontation of perceived sin… hurt feelings, ruined relationships.

3. LEGALISM IS INESCAPABLE WITHOUT GRACE

Luke 5:39 And no one after drinking old wine desires new, for he says, ‘The old is good.’”

Jesus says in a sense, ‘You have to choose, but I know which one you’ll choose. The one with which you are familiar. The old wine.’

Jesus is saying that the people who like old ways, won’t like new ways, on principle. The Pharisees aren’t going to ditch their fasting for rejoicing just because the Messiah is here. They are pertinacious. They stubbornly cling to their belief that their tradition is right.

So what is the solution?

The free gift of God’s power. God needs to sovereignly overpower your legalism, your self-righteous pride, change your heart, and flood you with grace. Grace to see the way you have been doing things your whole life is no longer appropriate. Grace to realize your system isn’t infallible.

How do you explain people who leave a lifetime of Catholicism, or Mormonism, or Islam or any legalistic system, for the new wine of the gospel? The only explanation is God’s grace.

Stop being pertinacious! Don’t make a wine bomb. Don’t let your rigid traditions and personal tastes stop you from embracing a new work of God.

God’s mercy is as old as time, but new every morning.

Praising God in song is as old as the angelic choir, but there are new songs and new voices to sing it.

The gospel of Jesus Christ is as old as the old rugged cross, but there are new ears to hear it and new ways to reach them.

Don’t be satisfied with the old wine of your traditions and risk refusing the new wine of Christ’s grace. If you are pertinaciously clinging to an inappropriate, legalistic tradition, there’s something you can do today: let it go!